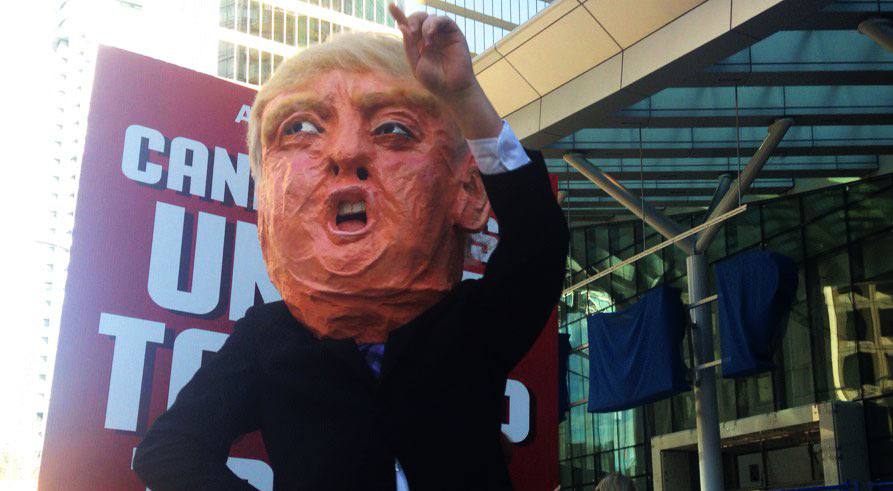 Written by Nicole Esligar, MA Candidate in Political Science at the University of British Columbia

Donald Trump has received a lot of attention in the media lately – more so than probably any other topic currently trending in the world right now. Now, while that is problematic enough on its own – I mean, does anyone know what Putin is doing right now? That is only a small part of what is really at stake here.

As Canadians, we’ve been watching this election from a distance, probably in that train-wreck, “can’t look away” kind of way, but never with too much real, sustained interest. After all, he’s not our leader. And Hillary’s probably going to win anyways… right?

But after the final debate, Canadians – and proponents of democracy alike – it is time to tune in. It is time to react. Things are happening. Things that have deep and lasting impacts for us, for the world, and for democracy.

For what I’m quite sure is the first time in history, we have a presidential candidate, running for election in one of the leading democracies in the world, that is blatantly and repeatedly challenging the very foundations of democracy as a whole. That is disregarding democratic values as if they’re mere suggestions.

For what I’m quite sure is the first time in modern history, we have a Presidential Candidate openly stating he would put his opponent in jail if he could.

We have a Presidential Candidate segregating our population based on race, gender, and wealth.

We have a Presidential Candidate openly and publicly evading taxes.

We have a Presidential Candidate making sexually inappropriate comments towards women, and openly using his position of power as an excuse for his sexual harassment and sexual assault.

We have a Presidential Candidate who has openly and directly associated all refugees coming into the US with ISIS.

We have a Presidential Candidate who believes nuclear weapons and hard power should come first, and negotiation and communication second.

We have a Presidential Candidate who has claimed that the media is against him, and has openly questioned and degraded the foundation of Free Press.

And lastly, we have a Presidential Candidate who has very clearly stated on several occasions that he might not accept the results of this democratic election if he does not win. That he will ‘decide in the moment’. As if this was a choice about what to order at a restaurant. As if this was even a viable choice at all.

Now, I have spent a decent amount of my time in academia learning about the United States’ foreign policy, and about its attempt at “spreading democracy” around the world. What is astounding to me is that the country that the above “horrifying” acts are occurring in is the same country that has repeatedly intervened in countries with despotic and corrupt rulers, under this guise of “spreading democracy”.

It has actively worked to unseat the governments engaging in these exact same behaviours.

The US, and many other western countries for that matter, have repeatedly, publicly, and consistently criticized and aided in unseating governments who: violate their citizen’s human rights based on ethnicity, gender or religion; who evade paying taxes and who corruptly manage their finances; who jail their opponents; who condemn free press; and who refuse to abide by the results of a legitimate and fair democratic election.

I am by no means an expert in US Politics, and I don’t claim to have a solid background in democratic theory, but even I can tell that this is challenging not only the integrity of this current election, but also the integrity of the democratic process as a whole. How can we allow a Presidential Candidate to make such comments? How have there been such few consequences for him?

Trump’s real danger to Canada – and the world as a whole – is this incredibly dangerous precedent he is setting.

Not only is he modelling that sexist, racist, and degrading commentary is okay if you’re in a position of power, he’s also blaming, isolating, and degrading entire sections of the population based solely on their gender, ethnicity, and religion. He is scapegoating some of the social and economic problems of our time onto segments of our population that are different from him, and blaming them for the nation’s problems. Does that sound familiar?

When I look back on defining moments in our history, I’ve often wondered how an anti-Semitic, hate-filled, corrupt man rose so quickly to power in such morally wrong ways, and why so many people – good people, with solid values and a strong moral compass – followed him so diligently. Turns out, all it takes is silence. All it takes is passivity. All it takes is compliance.

Nicole Esligar is a Masters of Arts Candidate in Political Science at the University of British Columbia.