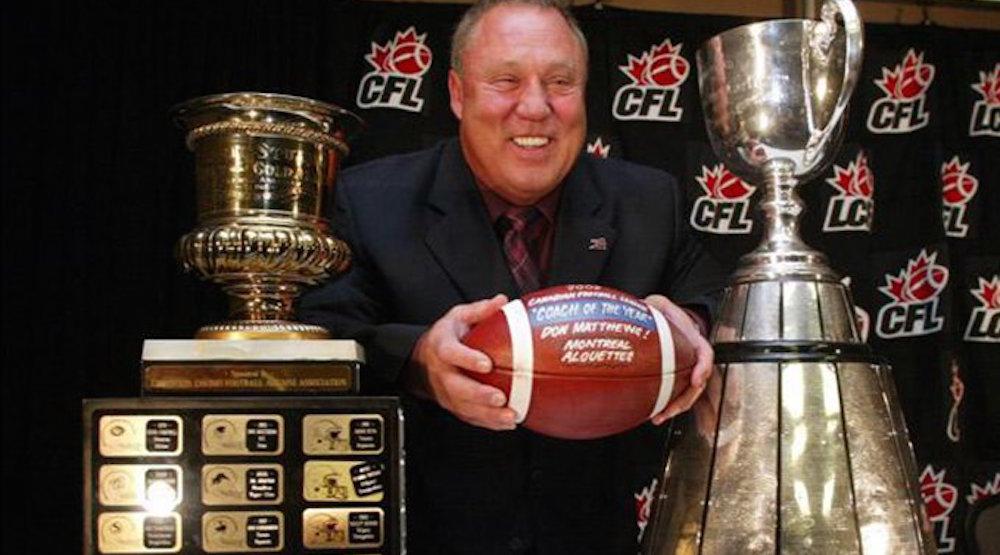 It’s a sad day in the CFL, as Hall of Fame coach Don Matthews passed away at the age of 77 on Wednesday.

Matthews was a CFL legend, coaching the Toronto Argonauts on three separate occasions, as well as the BC Lions, Saskatchewan Roughriders, Baltimore Stallions, Edmonton Eskimos, and Montreal Alouettes.

Beginning his CFL career in 1977 as a linebackers coach with the Eskimos, Matthews coached his last game in 2008 and retired as the league’s winningest coach with a record of 231-132-1. He currently sits behind only BC Lions head coach Wally Buono with the most career wins in the CFL.

Below is a statement from Jim Lawson, chair of the CFL’s board of governors:

Upon hearing of the passing of Don Matthews, the Canadian Football League family is both deeply saddened by this loss and grateful for his many contributions to our league.

The Don, as he was known, was one of a kind. He was a leader for so many of our greatest players and teams. He was a mentor to many of our current coaches. He was a charismatic star that loved to spar with the media at the same time he commanded the spotlight.

The record book is filled with his accomplishments. He won five Grey Cups as a head coach, with Toronto (2), Montreal, Baltimore and British Columbia. That ties him for the most ever, with three other legends (Wally Buono, Frank Clair and Hugh Campbell). He was a head coach in nine Grey Cups in total, tying him for the most ever. He won five more Grey Cup rings as a defensive coordinator, all with Edmonton. He won 231 regular season games as a head coach, which made him the winningest coach in CFL history until his total was eclipsed just a few years ago.

His defences and his teams inevitably took on his persona: they were bold, brash, confident. And like him, they were winners. A Canadian Football Hall of Famer, Don Matthews had style and swagger and a passion for life as well as football, and the CFL was more colourful, more compelling and simply better because he was part of it.

Our thoughts and prayers are with his family, all those who knew him and loved him, and the countless fans who will long remember him.