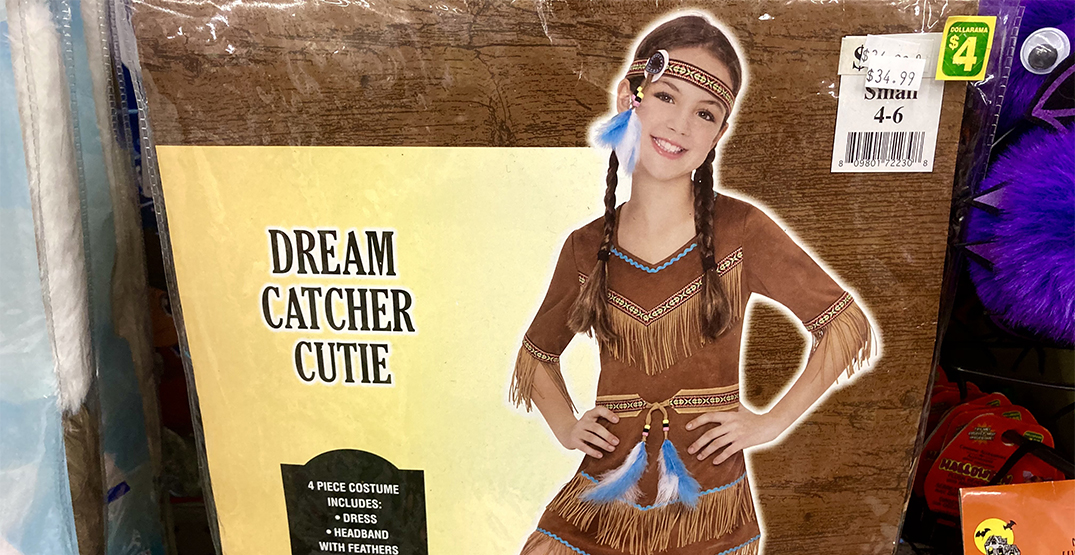 This costume was for sale at a Scarborough Dollarama on Monday, October 4, 2021. (PJ Boyd/Submitted)

People are calling out Dollarama for selling an objectionable Indigenous-themed Halloween costume on the heels of a summer when thousands of bodies were discovered in unmarked graves at residential school sites across Canada.

The costume in question is called “Dream Catcher Cutie” and shows a girl wearing a cartoonish version of traditional Indigenous clothing. At least two Ontario stores were selling the costume, and it may have been available at more locations across the country.

“I was outraged,” Bobby Bonner, who is Metis and Ojibway, told Daily Hive. “It must have passed through several hands before hitting the shelves, and no one in the chain of people thought it was a problem.”

Bonner was shown a photo of the costume by friend Patrick Boyd, who saw it at the Kennedy Commons Dollarama in Scarborough on October 4, which also happens to be the National Day of Action for Missing and Murdered Indigenous Women and Girls.

“To see that little girl’s outfit on the day when we’re supposed to be taking action to help young girls, I just found it out of touch,” he said. “Just horrible to see.”

Dollarama spokesperson Lyla Radmanovich told Daily Hive that the chain did not intend to purchase the Dream Catcher Cutie outfit, saying it inadvertently came in a shipment of assorted costumes.

“I can confirm we are removing it from store shelves wherever it was available,” she said.

Dollarama did not answer questions about which stores stocked the costume, but another customer spotted it at a location just outside Ottawa and denounced the company on Twitter.

“Less than one week after the first National Day for Truth and Reconciliation, you still sell racist Halloween costumes in your stores,” Eric Barrette tweeted from Hawkesbury, Ontario.

Seriously Dollarama!! Less than one week after the first National Day for Truth and Reconciliation, you still sell racist halloween costumes in your stores! Seen in Hawkesbury, Ontario pic.twitter.com/O0pDVxaisO

“I fail to understand why any organization, be it Dollarama or anyone else, would think it would be appropriate to be selling these types of things,” he said.

This incident speaks to the need for more education and compassion about residential schools and the genocide Canada committed against Indigenous people, Bonner added.

He found the costume offensive not only because it misused feathers (considered sacred in many Indigenous cultures) but also because it fell into a long history of romanticizing and appropriating Indigenous culture while actual Indigenous children were punished for speaking their language or wearing traditional clothing while at residential schools, he said.

“These types of things were taken from children and they were not allowed to wear them … and today there’s a costume with a little white girl saying Dream Catcher Cutie.”

Bonner wants people to widely recognize how wrong costumes like these are, and for mistakes such as these to stop being made.

The costume is still for sale on Amazon.