Vancouver dog owners want to be able to take their four legged friends onto the SkyTrain. It has been something that has been discussed before but has never really come to fruition. Thank goodness.

Imagine, you are on your way home from a busy day at the office, the SkyTrain is crammed and someone walks onto the train with their little shih tzu. Not only is it dangerous for the dog because someone could step on it, but what happens if it decided that it was going to relieve itself all over your killer shoes?

Sure, maybe dogs could be permitted on the train during non peak hours, but it still doesn’t solve the clean up problem. It’s not like I have anything against dogs. My problem is I don’t trust most Vancouver dog owners.

There is this new phenomenon in the city when it comes to cleaning up dog poo. While walking their dogs, some owners scoop poop, put it into a little bag, tie it up, and just throw it onto the ground and walk away.

I know I’m not the only one that has seen this mind boggling act. In fact I took a picture of it. I found this little treasure at a local playground. 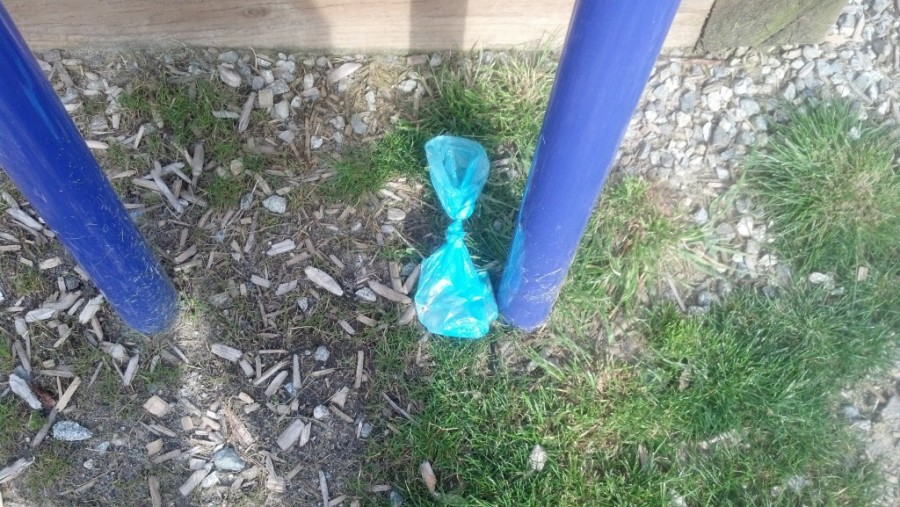 This dog poo, bag tossing is all the rage and it’s not just happening in Vancouver but throughout the Lower Mainland. Recently, Coquitlam mayor Richard Stewart was on Global News addressing the stinky issue as he was finding more and more of these mystery bags in local parks.

“It’s a terrible practice…They’ll wrap it in plastic and throw it in the bush,” Stewart told Global News. “It produces an awful lot of dog poop in certain areas of the park and it can really damage local streams. We need to educate people, we need people to understand that this dog excrement attracts rats, it produces all sorts of disease within our forest.”

Most people who have dogs aren’t really this dense. Before I get the hate tweets let me go on record by saying most dog owners are very respectful and reasonable. However, there seems to be some people out there that need to be reminded of proper etiquette when it comes to cleaning up Fido’s  poo and where to dispose of it.

It is recommended that you don’t put dog waste in the garbage can. In fact most municipalities encourage you to put it in a compost or flush it down a toilet.

It’s not just dog doo-doo that is the issue but sometimes the pee can cause damage too. For instance, in my Strata complex there is a grassy area that is meant for kids and families to use. There is a clear sign that says no dogs.

The reasons being are some dogs dig and destroy the grass and landscaping, and female dog pee destroys grass due to high levels of nitrogen in their urine. It’s also not a lot of fun playing soccer with your kid and having to scrape off dog crap from the bottom of their shoes.

Some people ignore the no dog signs. When you confront them on the issue, they do the “Oh I didn’t know” routine as they stand right next to the clearly marked sign.

A lot of owners feel like they are entitled or at least their furry little friends are. I have seen dog poop on people’s front lawns and the owner just keeps walking as if it’s all natural and they don’t have to clean it up.

Vancouver and the surrounding area have many pet owners but there seems to be a growing number of dog lovers who just don’t give a flying poodle about proper K9 protocol.

Since we are on the subject of pet manners, many have experienced the dog that yaps all night or first thing in the early morning. Putting your dog on your patio or in the back yard and allowing it to bark at all hours of the day should make it free game for target practice. I kid. Kind of.

If your dog has behavior problems or barks at everything including the wind, it might be time to either invest in obedience school, a muzzle, or keep it inside.

Speaking of muzzles, why do people who own pit bulls or other dogs of that ilk think that allowing them to run around in a playground or park, unleashed and with no muzzle, is a good idea?

Breeds like pit bulls get a bad rap from time-to-time, but as sweet as “Chomper” may be, the people around you aren’t comfortable having a misunderstood predator running around who, on a bad day, might decide to snap, putting other dogs and sometimes kids in danger.

Having any dog run around without a leash is stupid. That includes the little yappie ones that get beat up by cats. Honestly, those rats on strings aren’t cute. Did someone break one of the three rules and feed the mogwai after midnight?

What about the people that drive around in their cars with those toy dogs on their laps? Make sense of this, talking on a cell phone while driving is considered illegal, but having little “Mitsey” on your lap while doing mach ten down the highway is apparently cute.

Don’t get me started on the outfits. Does a dog need a sweater, hat and matching boots? 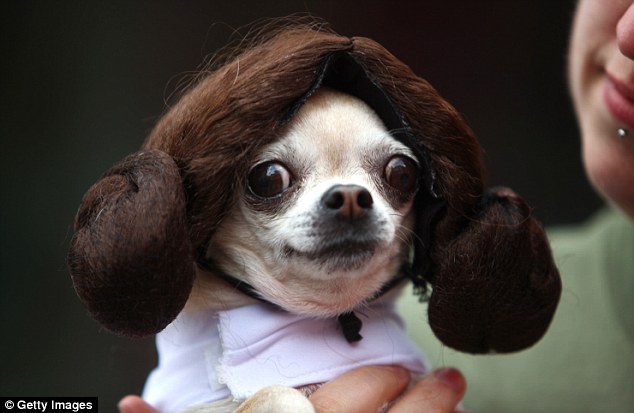 I get this column is going to ruffle some dog hair, but some of you dog lovers out there give the good ones a bad name.

I could go on about dog owner stupidity. For example leaving pets in hot vehicles or keeping them tied to parking meters for long periods of time. We are all aware of how horrible that is and remember the tragic story about the six dogs who died in the back of a dog walker’s van this last Summer.

People actually wanted to raise money to build a memorial for the dead dogs, which I never understood. Why not raise the money and give it to the SPCA? Do we need a dead dog memorial? But I digress.

Last but not least, why do some people call dogs their children? They are not kids. Not even close. Okay sometimes I feel my little guy is like a dog from time-to-time with the “No!” and the constant yell of “Come here!” that I find myself screaming in grocery stores but there is a big difference between dogs and kids.

Unless you mated with a chihuahua, you did not have puppies to call your children. It’s people who don’t have kids that are the ones who do this. Trust me, as soon as you have little ones in your life you quickly realize that kids are a lot more work and so much more rewarding than a pet.

Nothing erks me more when I hear, “Come here to mommy!” Who loves you? Mommy loves you!” while the dog licks your face. Is it wrong for me to answer, “he looks so much like you?”

If you are that obsessed with your pet that you have to call it your child, then maybe we should treat kids and dogs the same. The first thing I will do is to make sure I take my toddler’s dirty, stinky, poopy, diaper to the nearest park, roll it up, and just leave it there on the grass. It’s natural.

What say you? Are most dog owners in Vancouver oblivious to proper dog etiquette?

Feel free to comment below, or tweet at @VancityBuzz or me @TrevDueck. Give us your thoughts, but stay classy Vancouver.