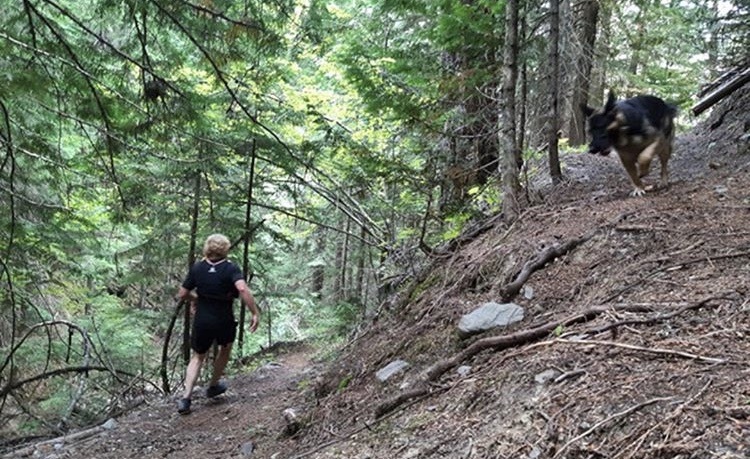 Non-profit group The Fur-Bearers is offering a $1,000 reward to find who is responsible for leaving poisoned meat on a trail after a beloved German Shepherd ingested it — and died soon after in her owner’s arms.

The Fur-Bearers Spokesperson Michael Howie said in a phone interview with Daily Hive Vancouver that it happened when Andrew Stolz was out for a run with a friend and his dog, Topaz late last month, north of Kitchener, BC.

Howie said he can’t put into words what Stolz had to experience. “To carry your loved one in your arms as they are violently seizing — as they are literally being tortured to death by a chemical — and then to watch them die, and having the ability to do nothing about it,” he said.

Howie said it’s been confirmed that the baited meat pile was laced with the illegal (in BC) poison Strychnine, a form of euthanasia — calling it an “act of poaching” and a threat for domestic and wild animals.

He said this comes after another dog was likely poisoned in the same area, but survived because it got to a vet fast enough.

“It is exceptionally frustrating to know that someone is out there putting out a poison that will at the very least cause suffering to every animal who ingests it or potentially ingests another animal who has ingested it,” Howie said, calling it plain cruelty.

Howie said it’s disturbing to know there are people in the community that think it’s acceptable to go out into the wilderness to plant this poison in efforts to kill animals in mass numbers.

“We don’t even know why, I mean there’s a lot of guesses, we can speculate until we’re blue in the face, but ultimately someone made that decision and we know someone knows what’s going on — you know, the ability to keep a secret is very difficult in small communities,” he said.

“You can’t just get strychnine, you don’t just go out and lay out bait piles in an area where there’s a lot of recreationalists, where we know there’s been some hunting activity — someone knows something and this is the time to… regardless of your stance on wildlife, regardless of your stance on ecosystems, the environment, the policies surrounding all of them, your politics, this is the time to come out and say ‘that is always unacceptable.'”

Howie said that’s why the group is putting the reward forward, hoping it will put it “in frame of mind that this has occurred and that someone has that information” so they can provide investigators with leads to identify and convict the person(s) responsible — and to see justice.

It is very worrisome

Investigating Officer James Barber said the CO is taking the case very seriously: “It’s just one of these troubling events that we would like to come to some conclusion.”

Barber said the investigation is ongoing, which included seizing evidence from the scene, located about 14 kilometers north of Kitchener in the backcountry.

“This was a road that had been ploughed from snow, all the other roads in that area were knee deep in snow, so you couldn’t drive, you’d have to have a snow machine, this was road access so somebody. This was a planned event.”

Barber said he knew the dog owner and Topaz, “and it is very troubling to see somebody so hurt. Being a dog owner myself, it is very worrisome.”

“People in the Creston area value their backcountry, they love recreating in it: they camp, they horseback, they mountain bike, they jog, and they take their pets with them,” said Barber.

“I’ve had numerous people tell me that they just feel taken hostage — they’re very, very worried about their pets and going into the backcountry.”

Barber said the COS wants the support of the public, “if anybody does see any suspicious activity in the backcountry to really, you know, take the time, don’t assume anything… that it’s nothing, just phone our RAPP line and let us, the Conservation Officer Service, sort that out — every call’s important and that if people do see stuff to tell everybody — don’t make any assumptions, just phone and if it’s nothing, we’ll figure that out — but if it is something, it’s very important.”

If you have information about the investigation, or wish to remain anonymous, you’re asked to contact the Report All Polluters and Poachers (RAPP) line at 1-877-952-7277.