Your dog isn’t being lazy, you are.

Similar to the wildly popular trackers for people like Jawbone Up, Fitbit and Nike + Fuelband, pet activity trackers monitor your dog’s progress in real time, all while collecting and analysing the data in hopes of making a positive change in their activity level and health.

They’re wildly popular, according to Elliott Chun of Future Shop, who says the devices are flying off store shelves.

It makes total sense for a city like Vancouver, where residents are both dog and exercise crazy.

“The majority of pet owners consider their fur-babies a close family member and, as such, they want to take as good care of their pets as they do themselves,” Chun tells Vancity Buzz.

They can also keep your pet safe. The new Tractive GPS ($199) monitors your pet’s location via global positioning and Smartphone-enabled maps, making it easy to find them if they get lost. You can also set location boundaries within the app, and be notified via text message if your dog goes outside of that area.

You can also preorder a FitBark ($129) ahead of its March release. It comes in an array of colours.

I tested the Tractive MOTION, which retails for $99, and is arguably the most popular. The light bluetooth-enabled tracker is housed within a 7 gram waterproof housing that snaps simply onto a collar. It’s very light: my mutt terrier Seymour weighs 15 pounds, and he didn’t notice it at all.

After downloading the Tractive Smartphone app, you set a daily activity goal. I chose 4,000 “Pet Points” a day, which they say is appropriate for a medium active dog. It doesn’t really give you any guidance on what to choose, so I went to the mid-range. The points represent steps, movement and overall playtime and they’re monitored through motion and brightness sensors, and something called an accelerometer. 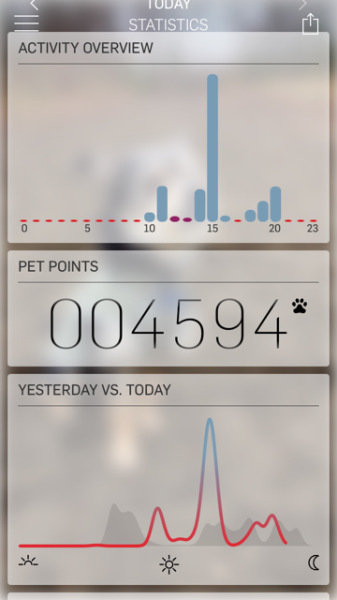 Having a newly rescued dog with pretty high separation anxiety, a fascinating feature of the app is seeing your pet’s activity in real time, broken down hour-by-hour. I could see a spike in his activity at 8 a.m., when I leave for work, but then none again until I return.

That’s when I learned my dog literally does nothing all day.

Chun tells me this is one of the features that customers appreciate the most.

“Animals are often left home alone during the day when owners are at work and usually aren’t active, so it’s a nice way of keeping track of their exercise and making sure they get enough when you get home,” he said.

The app gives you a detailed breakdown of your pet’s activity for the day, comparing it to the rest of the week or month to see how you’re doing. That activity is broken down into percentages for lazy, active and dynamic. 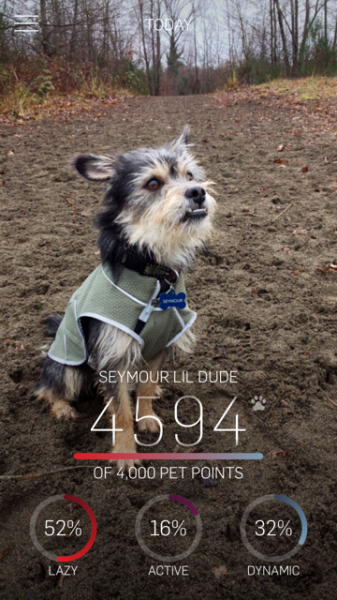 One minus: battery life. Despite the promise of a week-long battery, the Tractive would hold a charge for one day, but never two days in a row. It sometimes meant it crapped out in the middle of a walk, and you lost part of a day’s exercise log. It has to be plugged into the wall to recharge.

A plus: As a proud dog owner, the technology does bring out your competitive spirit. After setting the daily goal, however arbitrary, I felt a weird sense of letting down the Tractive — and my dog, obviously — if we didn’t meet our daily goal.

It meant if we were short 500 points, we would do another lap around the block before bed.
You’re also rewarded every time your dog hits a milestone, like reaching 10,000 pet points or hitting the goal five days in a row. 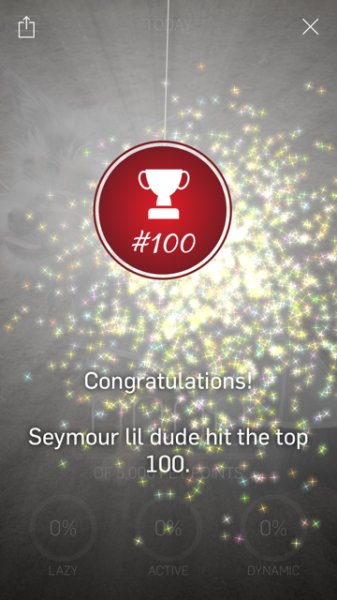 There’s also real time rankings that pit your dog against other app users. Seymour made it to the 84th top user worldwide, which signals he’s either kicking ass in terms of exercise (doubtful), the people who use the app don’t jog with their pooch as much as I do (plausible) or there just aren’t that many pet owners on board (most likely). 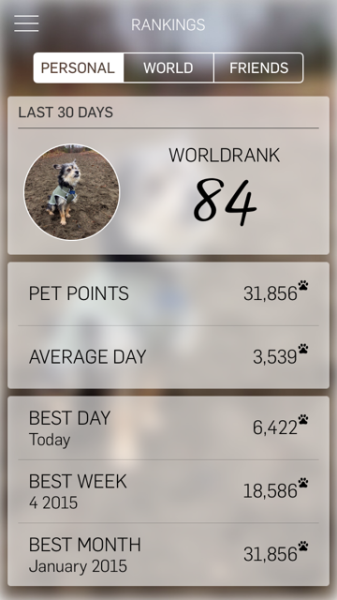 At the end of the day, there are a lot less lazy dogs out there than pet owners who choose to be sedentary.

So if we’re being honest with ourselves, most pet owners are acutely aware of how much exercise their dog is — or isn’t getting — and their fitness level is 100 per cent dependent on what they give to their furry companions. My dog has never turned down a walk, hike or trip to the park.

If you’re truly interested in improving the health and fitness of your pet, I’d suggest investing in one of the many great activity trackers geared at improving human health.

And next time you lace up your joggers and head to the seawall, grab Fido’s leash on the way. You’ll be better for it, and your dog will too.