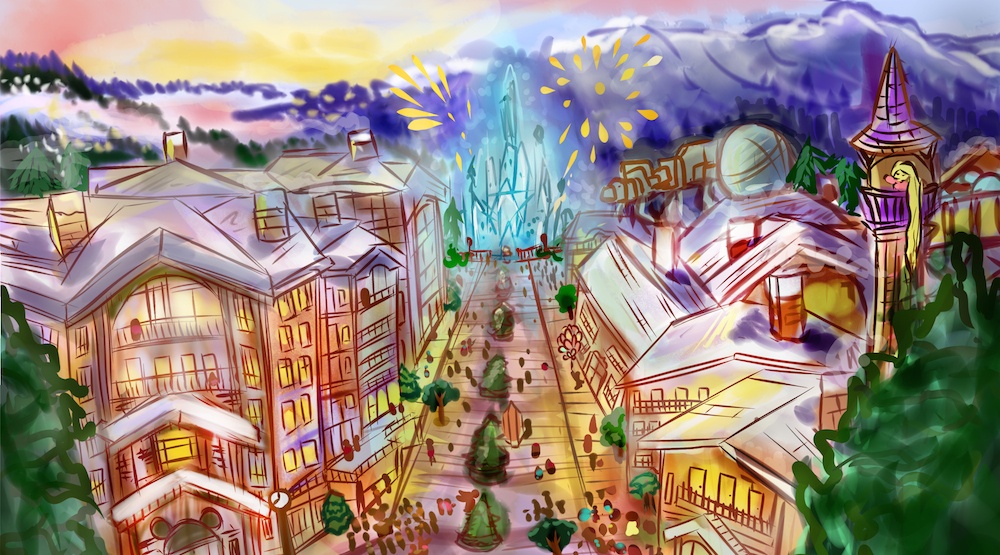 Although Disney is well known for its theme parks and hotel properties, this will be the company’s first foray into designing and operating a ski resort.

“An experience only Disney can deliver”

“This is an exciting new venture for the Walt Disney Company, and we will be bringing our very best to this global tourist destination to provide guests from around the world with an experience only Disney can deliver,” said Elias Oliver, chairman of Walt Disney Parks & Resorts, in a statement. “This ski resort immerses all visitors into the magical worlds of some of their favourite stories and allows them to meet their most beloved characters.”

“This is, indeed, a magical location for our first ski resort property, with vistas of the fjord below. We look forward with working closely with the local community on making this their own ‘Magic Kingdom’ as well.”

The ski resort will be built on crown land between Alice Lake Provincial Park and Garibaldi Provincial Park. Plans include 124 ski runs over 3,000 acres of terrain, six gondolas, 24 chairlifts, and four lodges on the mountains.

But of course, this is no ordinary ski resort as any Disney project is accompanied with the Disney magical stamp of approval: The design for Garibaldi by Disney’s team of Imagineers will leverage some of Disney’s most beloved and successful franchises.

Life-sized statues of some of Disney’s most famous characters will provide directions on the slopes, and ski runs, gondolas, and lifts will all carry references to names from the Disney universe.

But this resort is much more than just about skiing and snowboarding; the winter season is naturally focused on skiing while the summer season will revolve around sightseeing, outdoor recreation and entertainment, and dining. Disney is planning to make Garibaldi a highly-sought year-round attraction with tree-top ropes courses, a mountaintop suspension bridge, a gravity-fed mountain roller coaster, and 16 ziplines, including a two-kilometre-long line.

A large main village at the base of the ski resort will revolve around “Main Street, Canada” – an area with 70 international retail stores, 30 restaurants, four spas, a dozen entertainment venues including movie and show theatres, and an audio-animatronic Country Bear Jamboree attraction.

There will be four Disney-operated hotels, each carrying a unique theme, for a total of 5,000 hotel rooms. This includes a flagship, 12-storey hotel with architecture that replicates Queen Elsa’s castle from Frozen, complete with a large inner courtyard that freezes over during the winter for outdoor ice skating.

A 5,000-person capacity plaza in front of the castle will host special events, such as concerts, and provide an optimal viewing location for seasonal nighttime castle lighting shows and pyrotechnic displays. 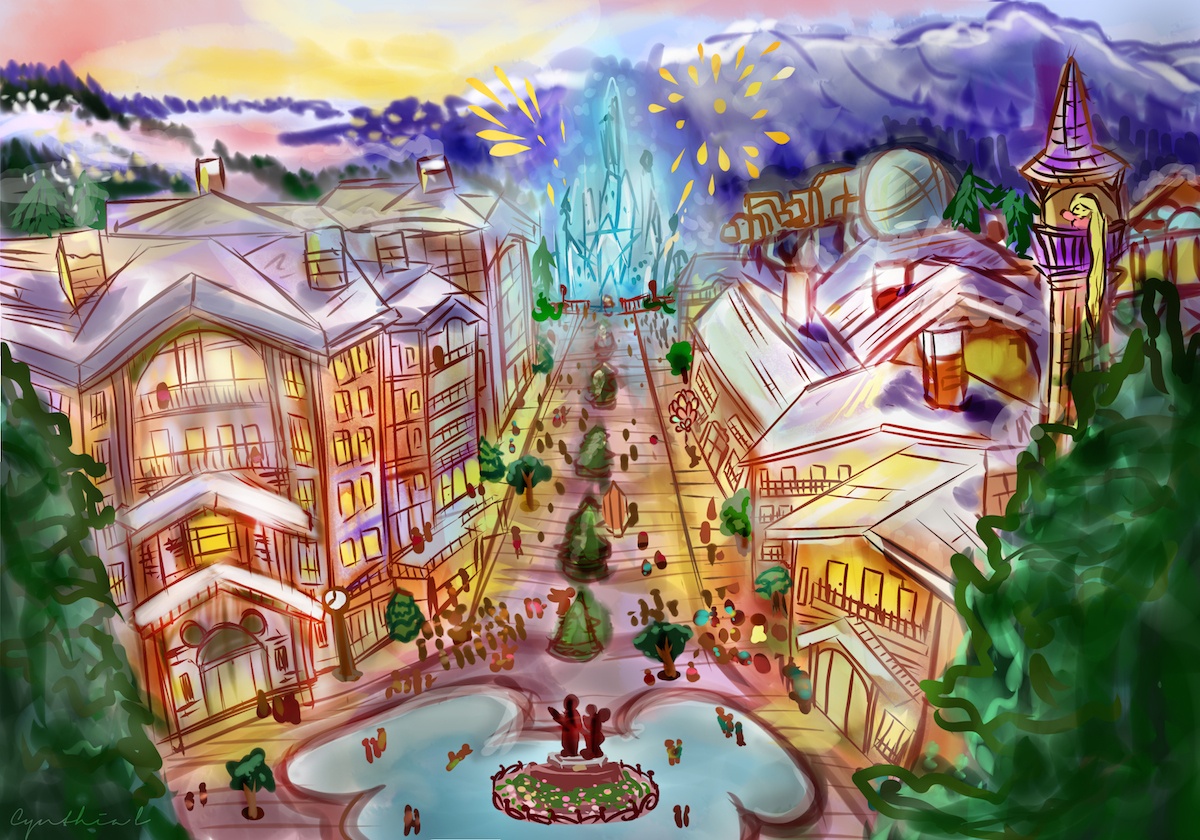 There are also plans for a 200,000-square-foot Toy Story-themed indoor water park within the village, with a prominent entrance from Main Street, Canada. The water park will consist of water slides, a wave pool, deep water surf simulator, hot and cold pools, bowling, cliff jumping, and rock climbing experiences.

Plans initially proposed by the Aquilini Investment Group to include two championship golf courses and a 12-court tennis facility are revived under the latest iteration of the project.

With hotel and housing units combined, Garibaldi could accommodate as many as 35,000 people at any one time.

Apart from an access road for maintenance crews, first responders, and freight, Garibaldi is planned as a car-free, fully-pedestrianized resort that is only accessible by a high-capacity gondola with a capacity to carry 5,000 passengers per hour per direction. The gondola will have a running route from the downslope parkade next to the Sea to Sky Highway to the village centre.

Residents, overnight hotel visitors, and non-overnight visitors will access the resort by parking their vehicles downslope at a seven-storey, 8,000-car capacity parkade next to the Sea to Sky Highway.

A large covered bus exchange next to the parkade, served by public transit buses and a fleet of Disney-operated buses, will provide both public and privately-operated bus connections to the Horseshoe Bay ferry terminal, downtown Vancouver, Lonsdale Quay’s SeaBus terminal, and Vancouver International Airport. Sightseeing excursions to other attractions in Howe Sound will also depart from this bus exchange.

The base station for the gondola to the main resort area will be located next to the parkade and bus exchange.

Self-sustaining infrastructure for the resort will be built next to the parkade, such as a small, contained sewage treatment plant and water storage tanks.

The Aquilini Investment Group says its partnership with Disney is highly strategic as it differentiates Garibaldi from other local ski resort experiences, particularly Whistler one hour north on the Sea to Sky Highway, as well as all other top ski resorts around the world.

“With our partnership with Disney, we are proud to push the boundaries of creativity and innovation for the ski resort concept. The partnership has been many years in the working, and we are thrilled to see it proceed to the next phase of planning,” said John Brian, Vice-President of Development with the Aquilini Investment Group. “This will be a standout world-class and high-tech ski resort, and it will elevate Vancouver into becoming a diverse global tourist destination.”

Construction on Garibaldi could begin in 2019 for a completion in time for the 2025-2026 ski season. Up to four million annual overnight and non-overnight visitors are expected by 2030, and activities spurred by the resort and its visitors will add $2.5 billion to the province’s economy every year by 2035.

When all attractions, amenities, and services are fully built, it will create 4,500 full-time jobs once operational. Additionally, up to 10,000 direct and indirect jobs could be created during the construction phase.

With Vancouver becoming one of Disney’s major global bases, the company will significantly ramp up its Disney Cruise Line sailing offerings from Canada Place in downtown Vancouver. Up to two Disney Cruise Line vessels could call Vancouver its port of call throughout the late-spring to early-fall months, with dozens of sailings to Alaska and Hawaii.

Leading up to his sudden death in 1966, Walt Disney had a plan to build a ski resort in Mineral King Valley in California’s Sequoia National Park. But plans fell apart after his death as the company, later led by his brother Roy, instead decided to focus efforts on their Florida theme park project – Magic Kingdom – which would eventually grow into Disney World.

The project was completely cancelled in 1978 when the US federal government turned the Mineral King Valley site into a protected national park.

“Garibaldi will fulfill Walt’s dream of a recreational getaway and entertainment kingdom in the snow,” said Oliver. “He once said, ‘All dreams can come true, if we have the courage to pursue them’. We haven’t forgotten, his dream will be realized half a century later.”

Some of the concepts for Garibaldi borrow from Disney’s plans for Mineral King Valley, including a car-free resort accessible only by a railway.

The audio-animatronic Country Bear Jamboree show at Magic Kingdom and Tokyo Disneyland were originally designed for the Mineral King Valley resort, and a version of it will be built at Garibaldi.

The Parks & Resorts division of the Walt Disney Company is leading the company in revenue growth. Revenue in the division rose by 6.4% to US$4.6 billion in the latest quarter.

This division consists of 12 theme parks around the world, dozens of hotel and resort properties, and Disney Cruise Lines, and generates roughly one-third of Disney’s overall US$52-billion annual revenues and one-fourth of its US$15-billion operating income.

To date, Disney’s largest hotel and resort property at a non-theme park location is Aulani, a beachside Disney hotel and resort at Oahu in Hawaii. Aulani opened in 2011 at a cost of $800 million and includes 359 hotel rooms, 460 vacation club villas, 16 suites, and a large volcano-themed water park.