In a city as grey and glassy as Vancouver, the nooks and crannies adorned with brightly-hued paint show the caricatures of a rebellious and artistic undercurrent that saturates the alleys and stairwells. That is the scene of street art in Vancouver, a hush-hush and often anonymous practice of plastering over drab walls with sometimes meaningful and sometimes irreverent pieces of art.

In the world of street art, there are few artists as well known as Banksy, the distinctive stencil artist whose work has inspired walking tours, documentaries and books. He has also laid foundation to a booming street art phenomenon that has established a respect and admiration for the colourful galleries hidden around cities.

In Vancouver, like most urban cities around the world, spotting an impressive piece of street art or graffiti can be gratifying. It is that little bit of secrecy and hidden appeal that is somewhat thrilling, finding something tucked away just barely within sight. It’s like finding $20 in your pocket.

For those wandering the streets of Gastown and East Vancouver, that thrill may be lurking just inside an alley or on a vacant wall. But the thing that makes street art so unique is that you might not know it when you see it.

There are several different styles of street art and graffiti, and all of them can be spotted in Vancouver. The most ubiquitous, and most irksome for property owners, is tagging. According to Web Urbanist, tagging is the simplest form of graffiti and is typically the artist’s signature spray painted in one colour. Spraying a tag on top of another tag is a sign of disrespect. Vancouver has seem some highly bizarre examples of tagging over the years, including one artist or group of artists who scrawled “John Cusack” over dozens of blank canvases in East Vancouver in 2013. 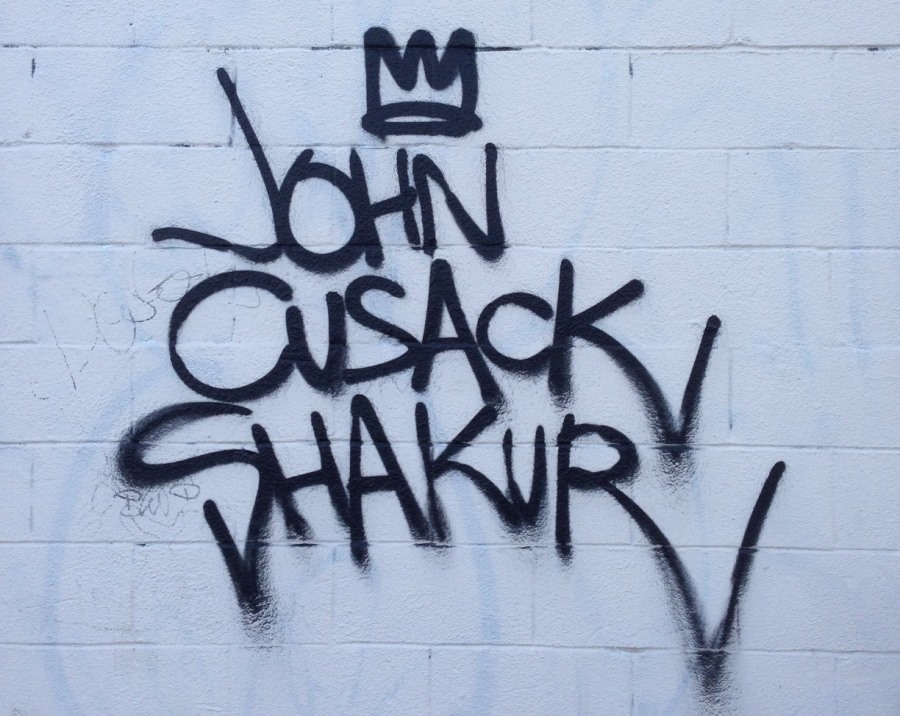 Before the famed movie actor’s name hit East Van walls, it was the anonymous Mohinder. The name was childishly scribbled on doorways, buildings and even awnings in 2013, and as we pointed out then, the artist was no Banksy.

But the more elaborate types of street art are the real masterpieces. Due to Banksy’s popularity, stencil art is largely in fashion and Vancouver’s top street artist iHeart knows how to master the technique. iHeart’s “Nobody Likes Me” piece in Stanley Park (now painted over) was named the second most popular street art piece in the world in 2014 and shared by Banksy himself on social media, and the artist has dozens more cropping up around the city. 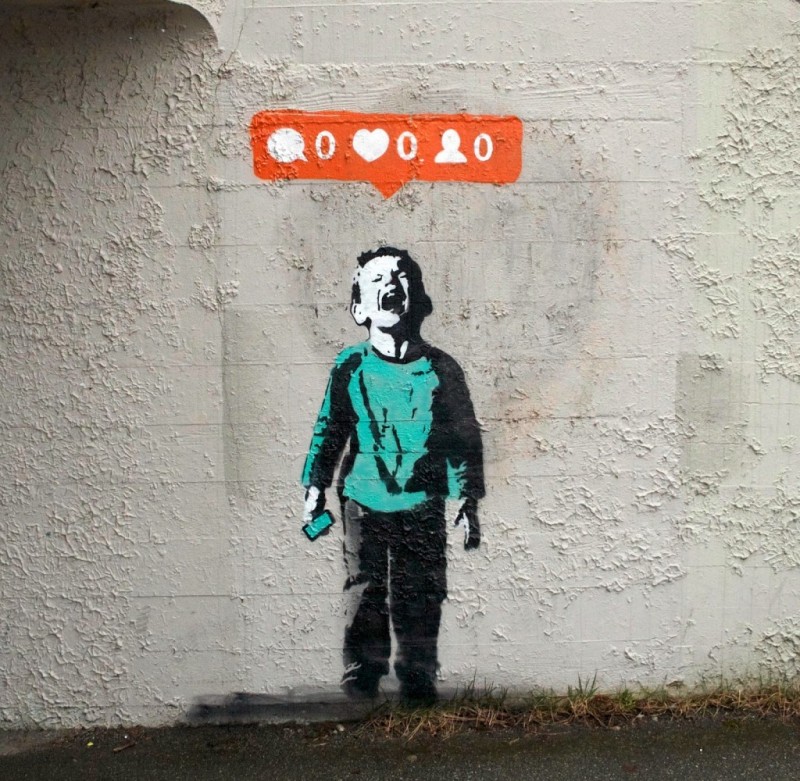 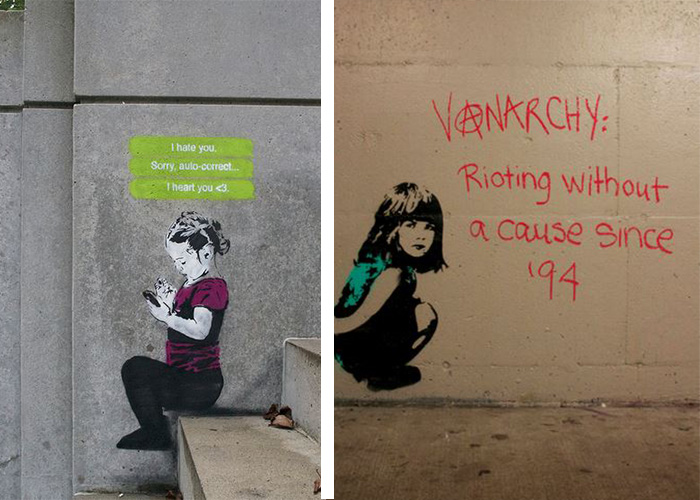 Walking around Downtown Vancouver, it is tough to spot a quality stencil piece, but some made from seemingly little work pack a lot of punch. One sidewalk stencil on Cambie Street just across the alley from Revolver Coffee is a serious reminder to passers-by of Vancouver’s homeless population. “I once lived here” is painted in a dingy corner sandwiched between dumpsters, but its simple message is shouted much louder than the cars roaring past and the nearby construction. 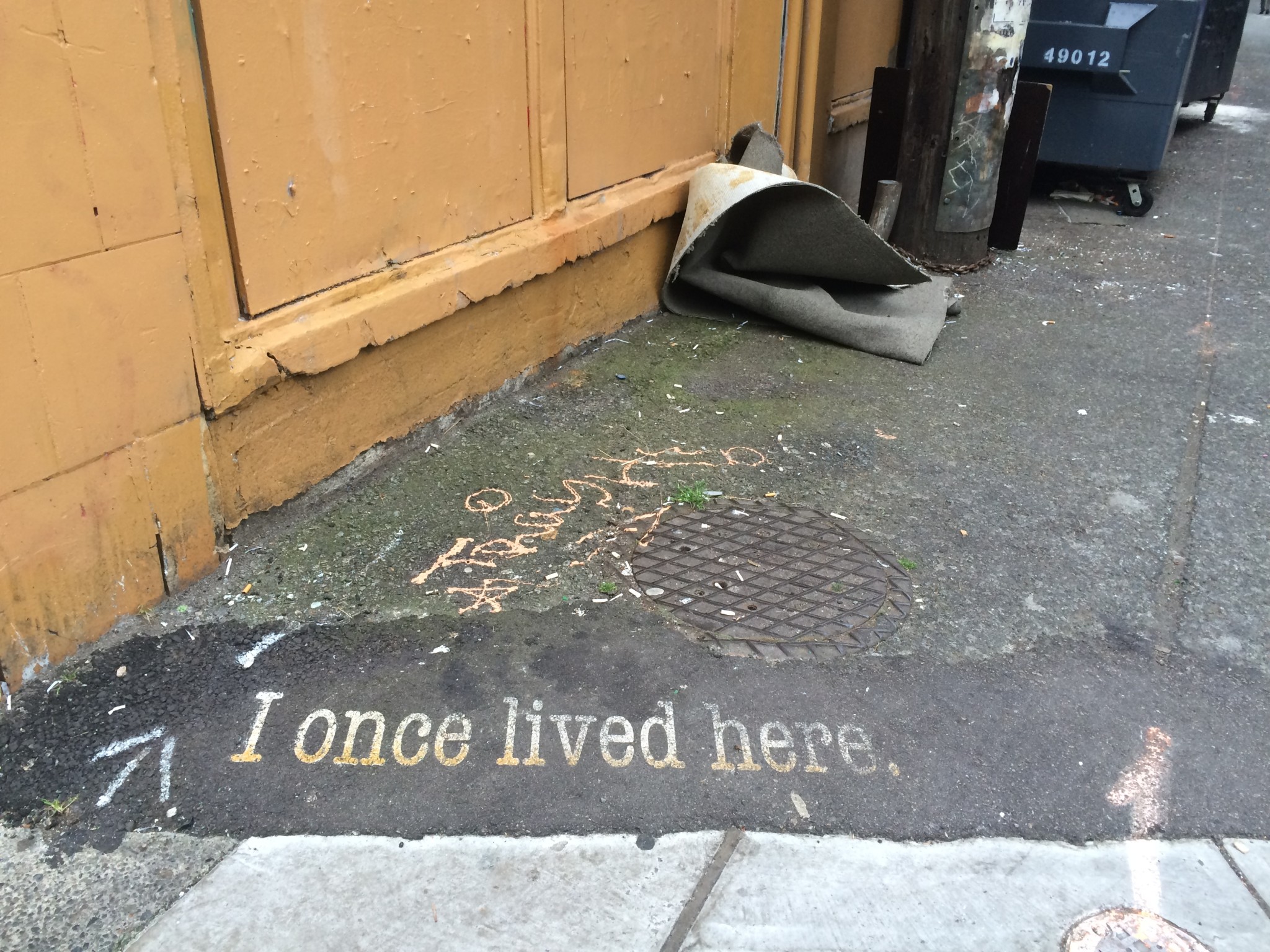 And then there are the truly complex pieces, the big and bright paintings splashed over large walls. Not to be confused with commissioned murals, the “piece” style graffiti is wholly unsanctioned but well respected. Because these pieces take much longer to complete, the artist has to work harder to evade being detected, thus creating a higher level of distinction for the piece.

An alley off of Richards Street just below West Hastings is saturated with this type of art. Amidst scrawls of big block letters and colourful scenery are real gems, such as one Vincent Van Gogh portrait. 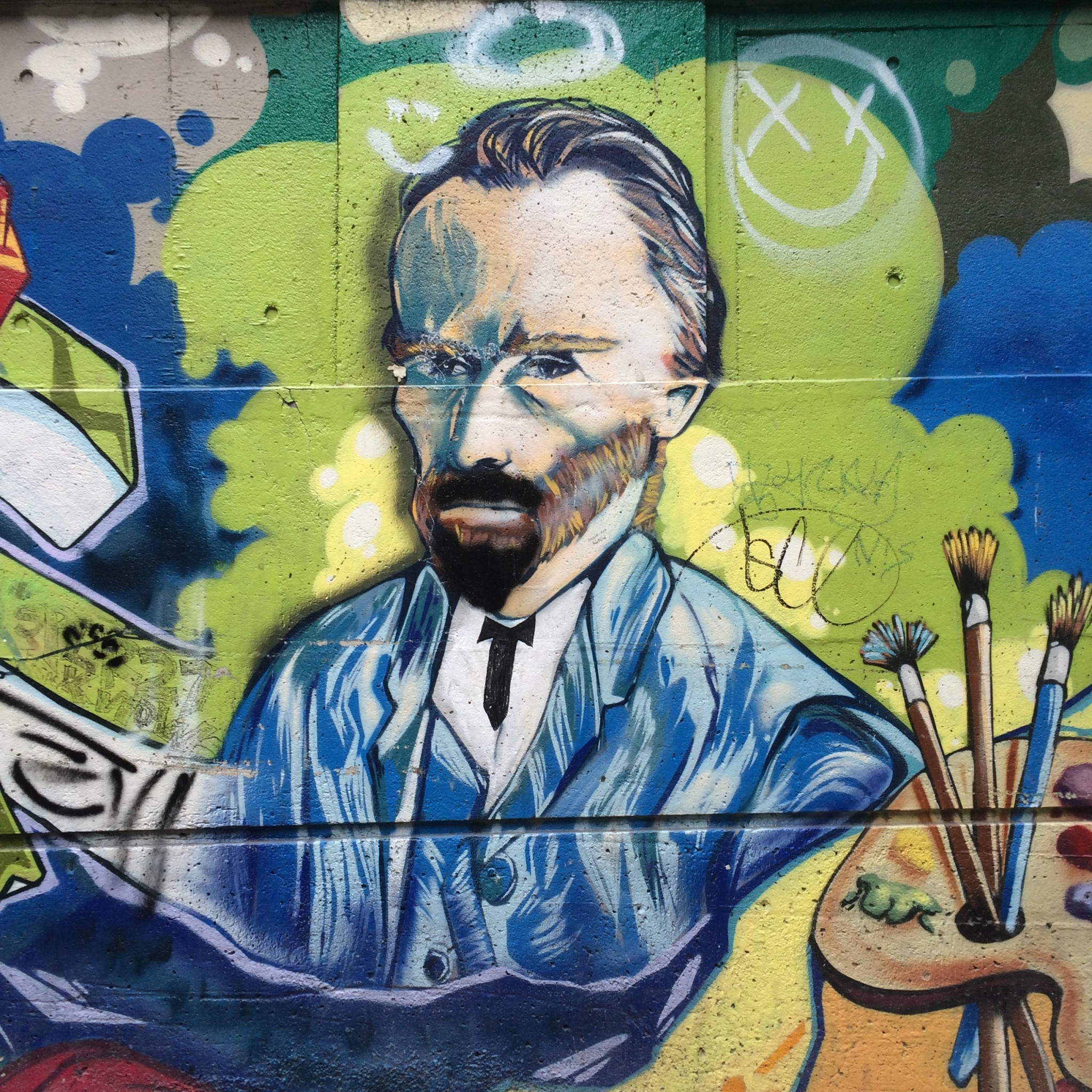 Another alley just behind the Amsterdam Cafe on West Hastings gives a less appealing image of graffiti in Vancouver. Three walls of a parking lot are painted block letters, one on top of another, creating a blurred mess of seemingly meaningless art. The style is aptly named “Throw-Up” because of its quick and easy application, similar to tagging but slightly more elaborate. 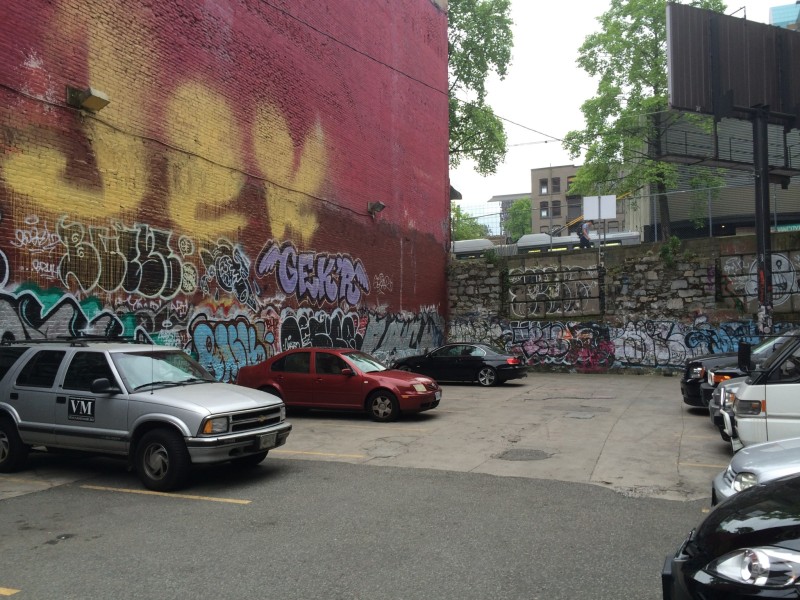 But between the tagging and “throw-up”, there are little nuggets of art. These ones found just around the corner from the above parking lot are moderate examples of the one-off pieces that can be found hiding just about anywhere. 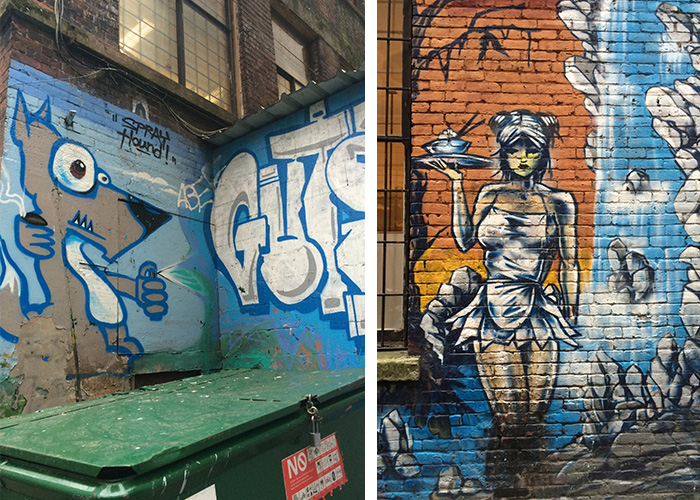 Few and far between there are the pop culture references that don’t go unnoticed. Several ‘Breaking Bad’ stickers by artist wRK(lESS) were found close to the series’ ending in 2013, and some still remain, though heavily vandalized. Bryan Cranston himself, star of the prolific AMC series, visited Vancouver and found a piece depicting his character. His ensuing tweet got almost 6000 retweets and almost 9000 favourites.

Did a double-take on this guy this morning on the streets of Vancouver. Tried to get him to tell me the ending of BB. pic.twitter.com/9ELAOnXCoL

Some pieces of graffiti seem to come without cause, but do catch eyes. One found this week on Alexander Street just past Columbia made a strange observation about colour schemes, for example. Who knows, this could be the next tag that takes over Vancouver. 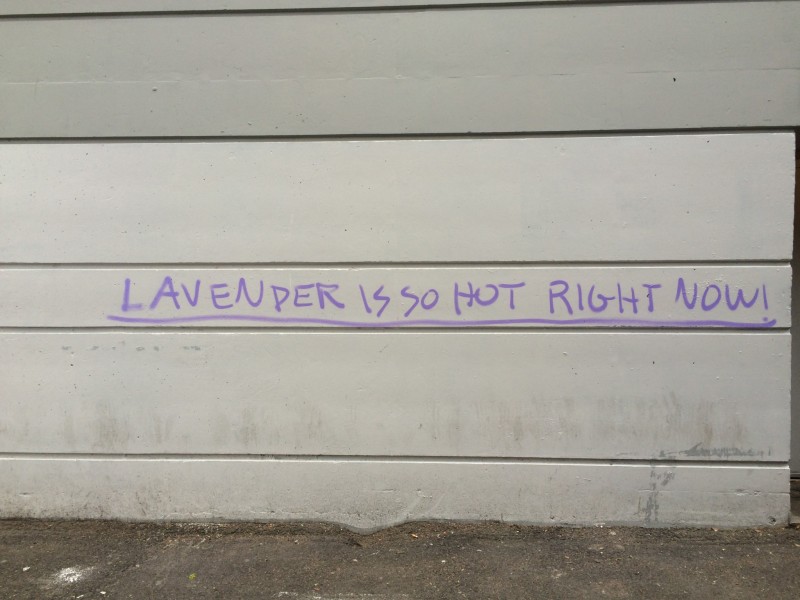 While Vancouver’s street art scene isn’t nearly as large as Toronto, San Francisco or New York’s and minute compared to the scenes in London, Bristol, Poland and Berlin, it continues to grow in size and popularity.

A recent app developed by three Vancouverites, Curb, maps where the street art is in numerous cities. In an image gallery style, users can view pictures of street art and find their exact location on a map.

Whether one goes with or without a map, wandering the painted alleys of Vancouver is an easy way to experience the vibrant and rebellious art culture our city holds close to its identity. Even more, it’s worth the thrill of spotting a new masterpiece few have seen before.