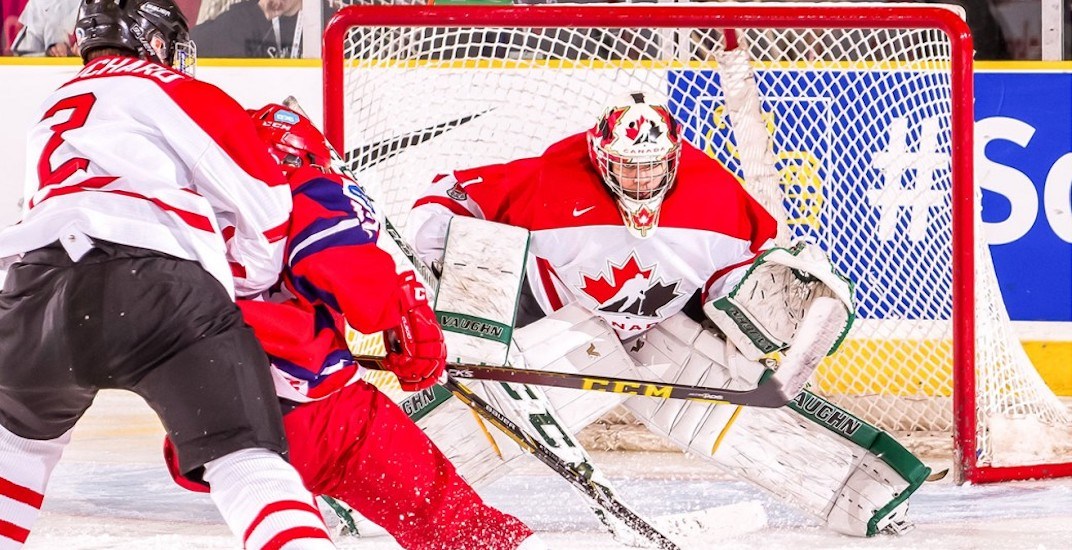 Michael DiPietro is mature beyond his years.

The 19-year-old Canucks prospect, one of Team Canada’s netminders at the IIHF World Junior Championship in Vancouver and Victoria this year, unveiled his goalie equipment this week.

Sporting a sleek red and white Canadian maple leaf design with a throwback feel, his fashion game will be on point.

But it’s the more subtle design that shows his maturity.

On the outside of DiPietro’s catching glove is the inscription of the Humboldt Broncos.

“It’s just something I wanted to do.”

This isn’t the first time that DiPietro has paid tribute to the Broncos, whose tragic bus crash last spring left an entire country in mourning.

Though he didn’t have a personal connection to anyone in Humboldt, DiPietro felt it was important to put the Broncos logo on his Canucks mask in training camp this year.

“Ever since the crash happened, it’s on all of my gear,” DiPietro said in an interview with TSN in Victoria this week. “I did it in Windsor to start the season. It’s just something I wanted to do, I really didn’t tell anyone about it. It’s just something that I have in my glove.”

After parts of four seasons with the Windsor Spitfires, DiPietro was traded to the OHL-leading Ottawa 67’s shortly before he joined Hockey Canada’s World Junior Selection Camp this month.

“Hockey’s a sport that brings people together, through good times and bad. Obviously, it was a tragedy that happened. It just reminds me of why I play hockey. Being with the guys, spending time with them.

“Even though I really didn’t know those individuals that passed away, we’re all Canadian and it’s something that I wanted to do this year and I might do it throughout my whole career now.”

The final goalie cut from last year’s team, the Amherstburg, Ontario native will share the net with Maple Leafs prospect Ian Scott. DiPietro is expected to get every opportunity to be the team’s starter, though nothing is guaranteed in a short tournament.

Though Scott has better numbers in junior this season, DiPietro has big game experience, having won a Memorial Cup in 2017. The OHL’s Goaltender of the Year in 2017-18, Hockey Canada brought DiPietro to the IIHF World Hockey Championships last May along with Connor McDavid and a host of NHL players, to give him extra experience.

Driven by his disappointment from last year, and buoyed by an unexpected trip to #IIHFWorlds, @miketendy is ready for another chance at the #WorldJuniors. pic.twitter.com/tYjhTgGUCZ