I should probably start by saying that Dinner by Bayan isn’t exactly for everyone. For example, there are folks that look at a Jackson Pollock painting and see an abstract work of art while others wonder who spilled the paint on a perfectly good canvas.

Or, on one hand, you have folks that think Raiders of the Lost Ark is a masterpiece in every way possible and on the other, you have crazy people that are wrong. 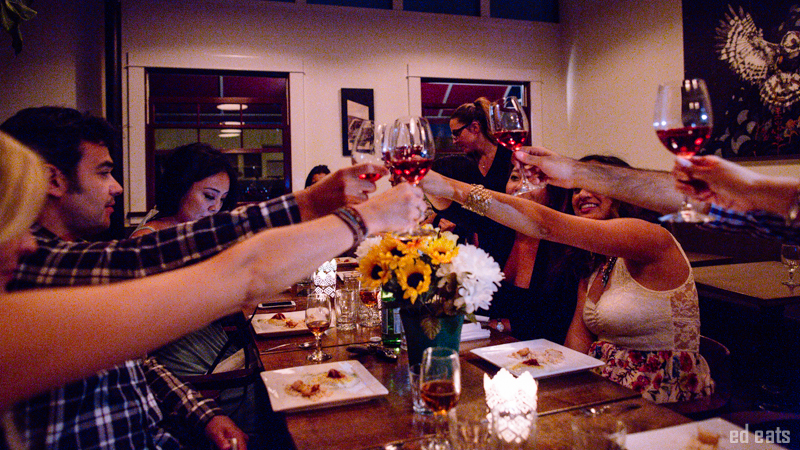 My point is – a tasting menu dinner like this, where you eat small portions of nine different courses (at least) over three hours (at least, in this case, almost six) isn’t going to be everyone’s idea of fun. The small plates are by design so that you can taste a lot of different things without getting full three courses in. True, you can get bigger portions for less money but maybe, like with a Jackson Pollock, you’d like to experience something you probably wouldn’t anywhere else. 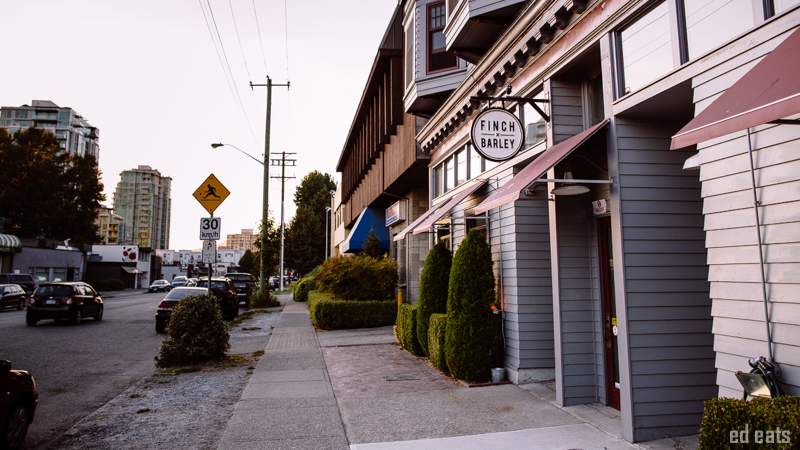 Dinner by Bayan is a pop-up dining event currently at Finch and Barley, a neat little restaurant and gallery in North Vancouver that closes early on nights that Chef Bayan is putting on a show. That’s what I ultimately think tasting menus like this are: a performance piece by a chef. There are no menus, no choices for the diner to make – just sit back and experience whatever the chef’s creativity has to offer. 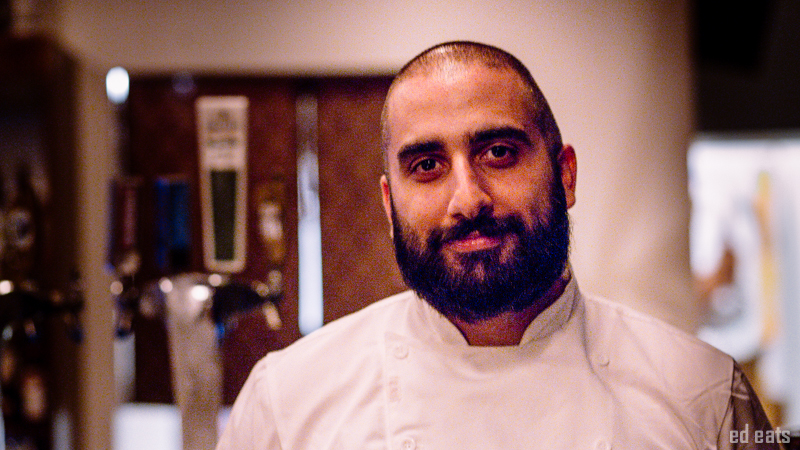 Chef Bayan Ghadrshenas’ dinners are his way of dipping a toe into the local Vancouver food scene to test the waters. He’s worked all over the place and you can see distinctly Asian (Japanese in particular) influence in many of his dishes. 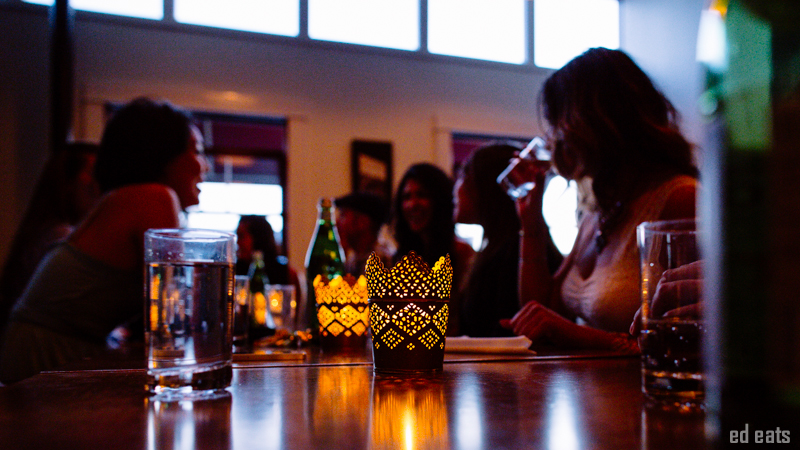 Although this is quite squarely in the realm of fine dining, Dinner by Bayan is a rather casual event. There’s no dress code (although most diners take the opportunity to fancy it up) and the atmosphere is relaxed. Chef Bayan picked a soundtrack that has equal parts Jay-Z, Justin Timberlake and Austin Powers-era pop ballads. I know that might sound like a strange combination but I heard quite a few people say how much they enjoyed the choices in tunes.

Everyone eats at the same long table so hopefully you’re comfortable eating with strangers. I had a great time with the people around me and while obviously you’re not required to make conversation, there’s probably no better place to meet new friends than sharing a meal at the dinner table. Plus everyone that goes to something like this likes food so you all have that in common. 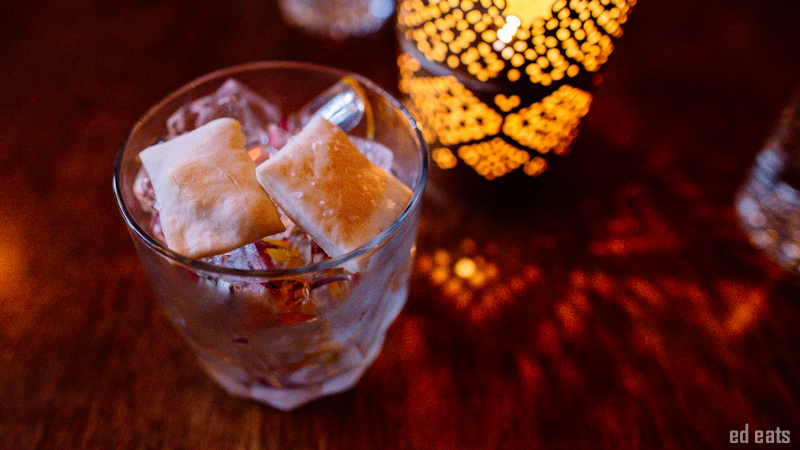 We kicked things off with a cup of “cheese and crackers”, an aged cheddar inside a bit of pastry. The cheese is sharp and strong but at the same time, they’re “cheese and crackers” so there isn’t a lot to say. I couldn’t figure out why they were on ice and I forgot to ask at the end of the meal. What I can tell you is that the “cracker” was crisp despite sitting in ice – but again, cheese and crackers. 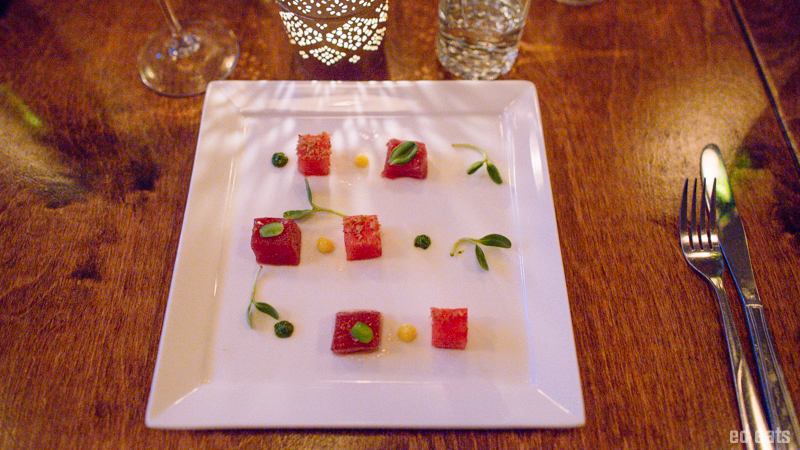 Next…well, we were already getting interesting. This is a plate of tuna and watermelon with dabs of lemon confit and coriander pesto. When faced with a dish like this, I like to taste each component by itself and then all together in one bite. All in one bite is the way to go here. I never thought of tuna and watermelon as a good combination, but it works. The textures go great together and are accented by the myriad of flavors that come with the lemon and coriander. Fresh, bright and seasoned perfectly. 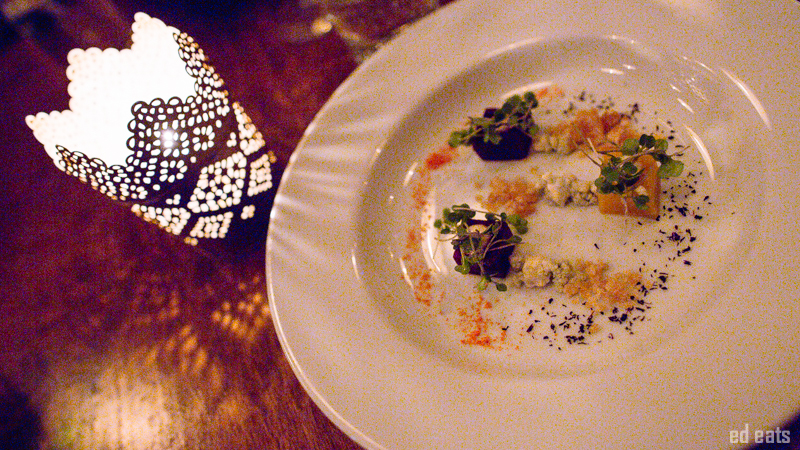 I usually don’t like beets. I just don’t, but in this case, this dish just sort of works. This is a combination of beets, blue cheese, horseradish, and sugar cane. If that sounds like a strange combination of ingredients, that’s probably the intention. Put together, though, it’s a potent, harmonic combination. The sugar cane is sweet, the horseradish is spicy, and the blue cheese gives you that rich funk that just bad in such a good way. You also have a very different set of textures among each component. The creamy blue cheese mixes so well with the beets and the bit of crunch from the crystallized sugar cane. I could eat plenty more of this and I don’t even like beets. 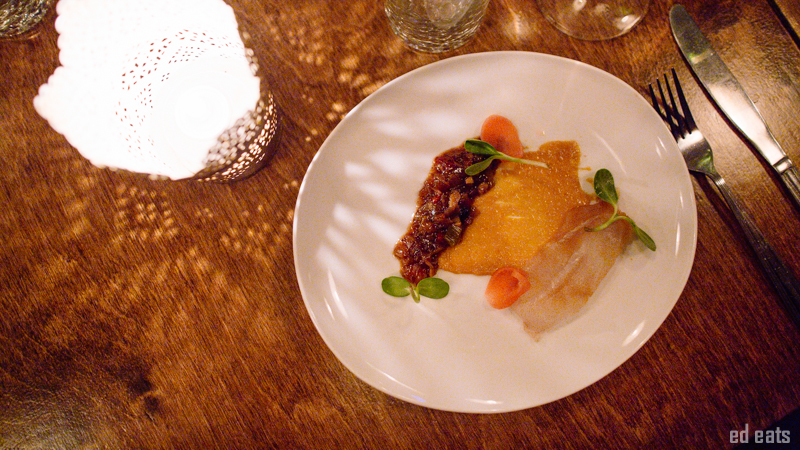 On this plate is halibut served with miso-mustard and Chinese preserves, which is another combo I probably wouldn’t have thought of but strangely works. The Chinese preserves remind me of ja jeung, which is a bean sauce (I think) commonly mixed with noodles. That’s why stuff like this is exciting. If you look at, for example, a steak on a menu, you could probably put together what it’ll taste like in your head by reading the description but this – I mean, this is just altogether new to me. 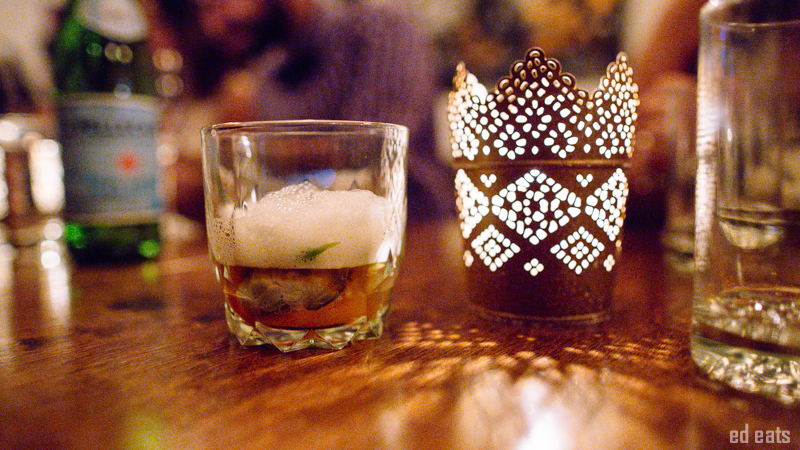 A glass of beer and ginger with an oyster in it was also served up. I love oysters, I love beer but I really, really dislike the flavor of ginger so this wasn’t one of my favourites of the night. 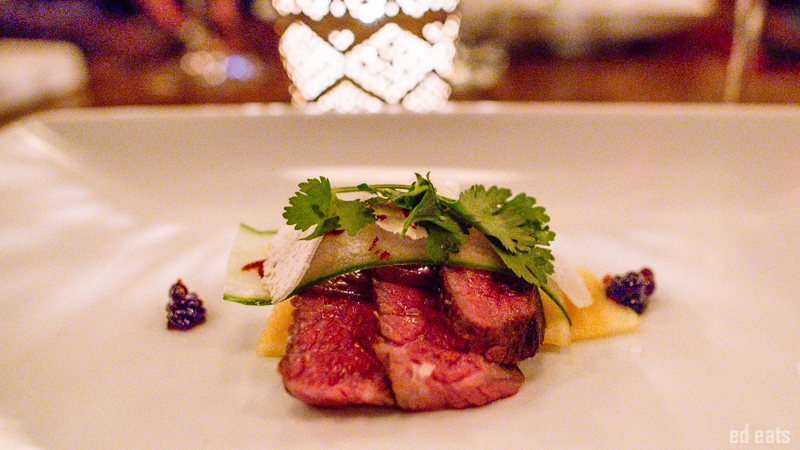 The steak is served rare on top of thin slices of cantaloupe, cucumber, soy pudding and what Chef Bayan calls “citrus sugar.” Those white flakes are made of sugar infused with lime. My steak was perfectly cooked and delicious although I didn’t think it was better or worse with the melon. The lime sugar, on the other hand, was interesting and added another dimension to the flavour. Necessary? Maybe not but certainly interesting. 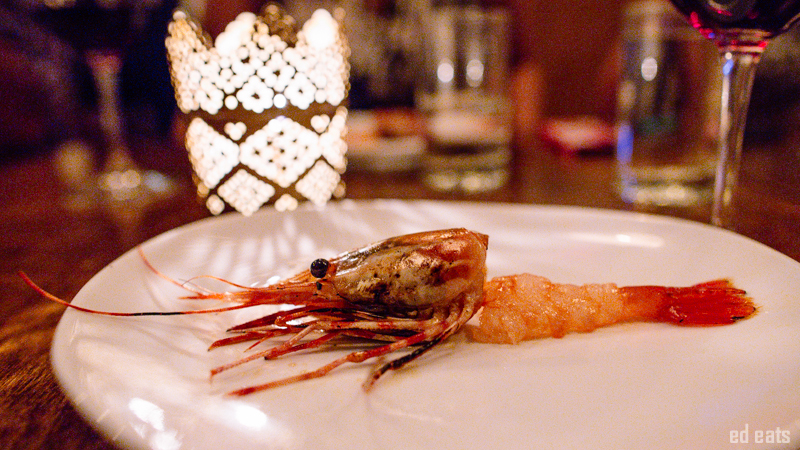 The spot prawn sashimi is actually a single spot prawn served two ways. The body is just simply a fresh spot prawn and carries all the delicious flavors associated with eating prawns raw but the head is charred, delivering an amazing, concentrated smokey prawn flavor when you suck out all those delicious, delicious brains. If you decide going zombie on some spot prawns isn’t for you, I’m sure you can hand it off to someone else at the table who knows what’s up. 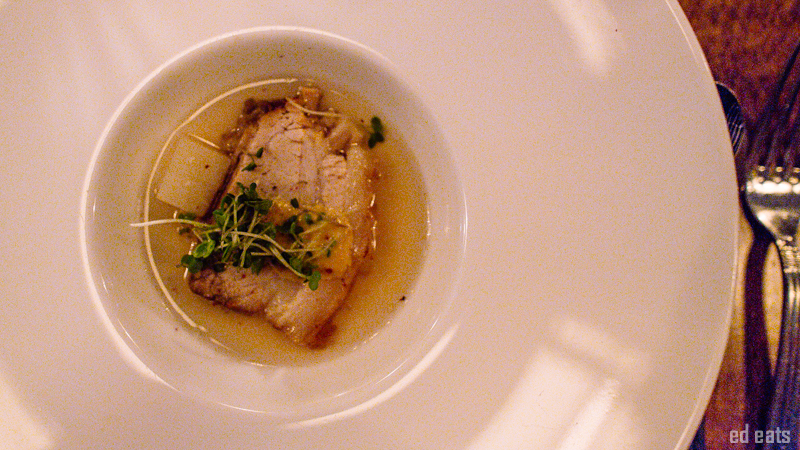 Chef Bayan next served a heavenly piece of tender pork belly served in a dashi broth and Japanese mustard. The richness of the pork belly is mellowed by the broth and spiced up with the mustard. I finished mine entirely too quickly and considered heading to the kitchen with my best Oliver Twist impersonation. 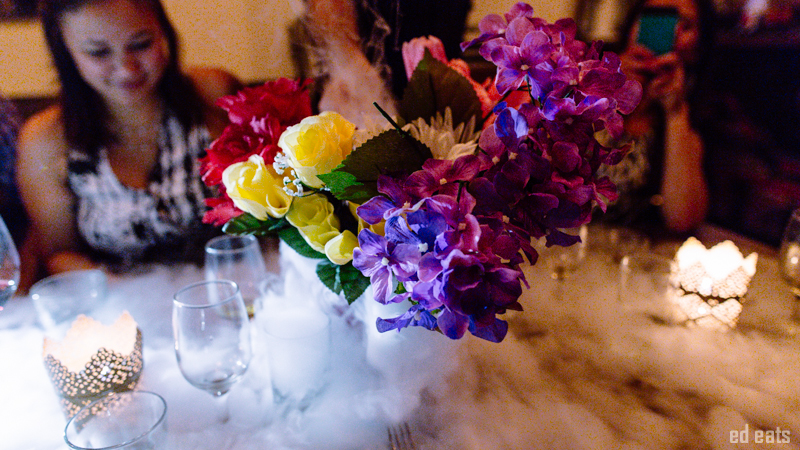 Our next dish was a little more theatrical than the rest. Our servers brought out vases of flowers packed with dry ice, which made the table look like we were getting ready for Pink Floyd. 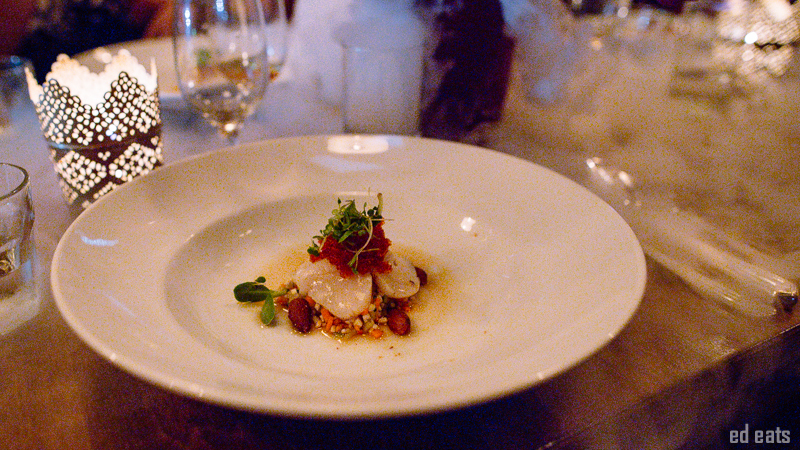 The fog perfume smells sweet and refreshing, meant to accompany the next course: a scallop sashimi with ponzu, sake and a fish roe. Raw scallops are one of my favourite things, like bright concentration of a briny sea. However, I found the diced veg underneath the scallops too raw and crunchy to go with the delicate taste of scallops. I understand not wanting to overwhelm them but I didn’t think they went very well together. 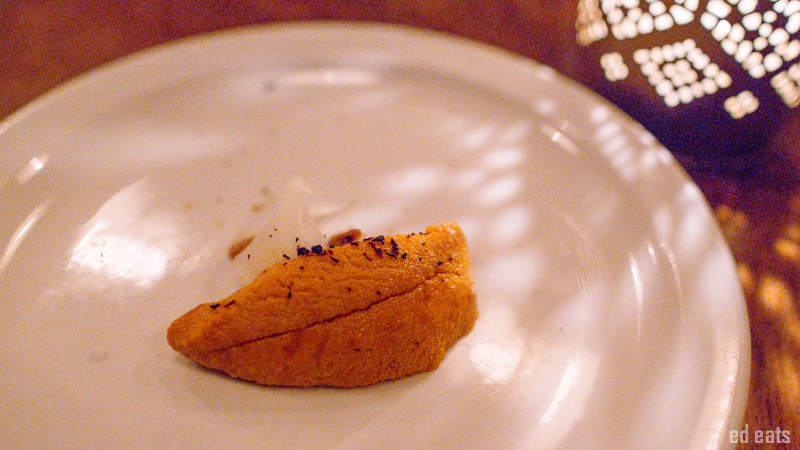 Uni is one of those things where you just wonder “who the heck thought of eating this first? Was it on a dare?” Seriously, have you ever seen one of these things before they hit the table? They look like rocks covered in spikes and cracking one open results in these weird, goopy yellow things that don’t look very appetizing.

But sea urchin is one of the pinnacles of seafood. If a scallop tastes like a light salty sea mist, uni is like Poseidon punching you in the mouth with the Loch Ness Monster. It’s another flavour you can’t quite describe but when you taste it, you know it’s something from the ocean. 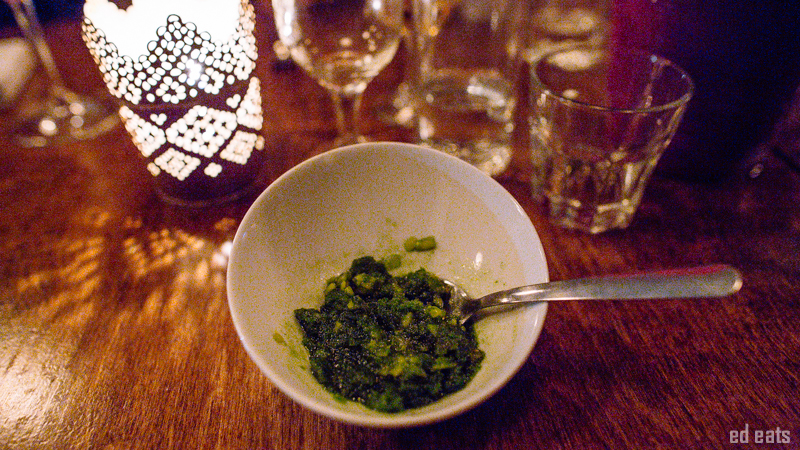 Chef Bayan and I talked about one of his most experimental dishes after the meal. While I’m glad to be a guinea pig, this “frozen salad” of kale, spinach and other greens with red wine vinegar and mango didn’t work.

You might like this if you’re one of those people that enjoys green smoothies. It’s not only overwhelmingly sour but ice cold and just an uncomfortable experience. I can see where he’s going with this but it needs to have other flavours than sour. 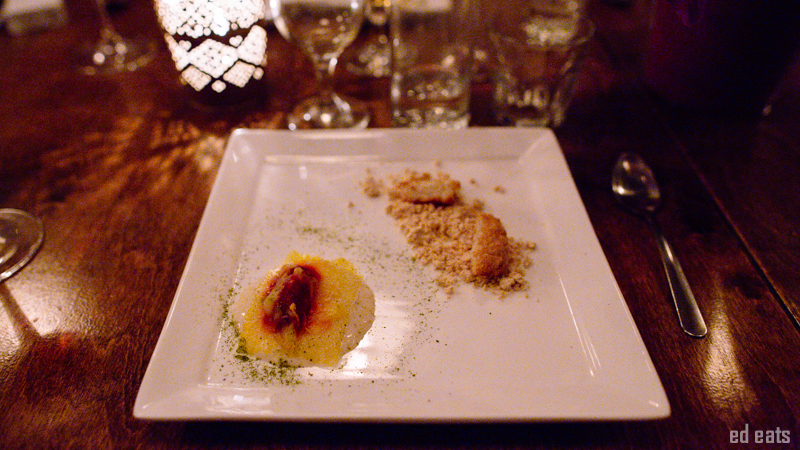 At about 11 p.m., almost five hours after we started, we got to our last course, a dessert of coffee panacotta and peanut butter powder. A nice, light way to end the meal. 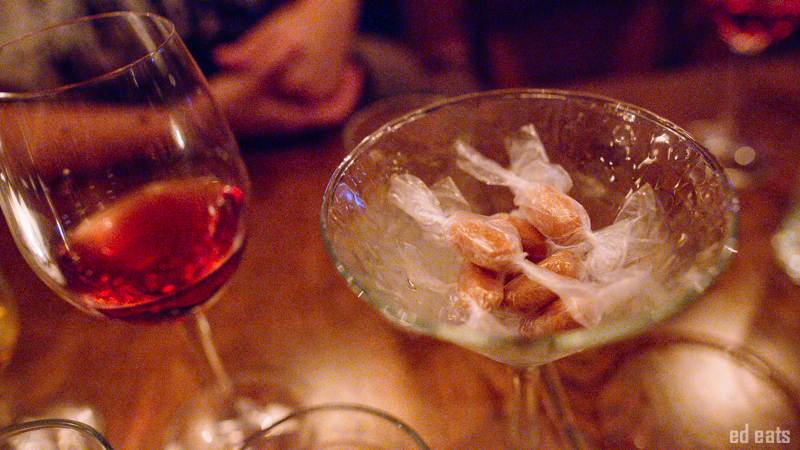 As the guests say their goodbyes and head for the door, we’re presented with one last little treat: salted caramels wrapped in rice paper. You can eat these wrapper and all as the rice paper dissolves quickly in your mouth, which may remind you of the White Rabbit candy that pulls off a similar magic trick. As far as salted caramel treats go, these are delicious, although you’d have to try very hard to make a salted caramel that isn’t delicious. 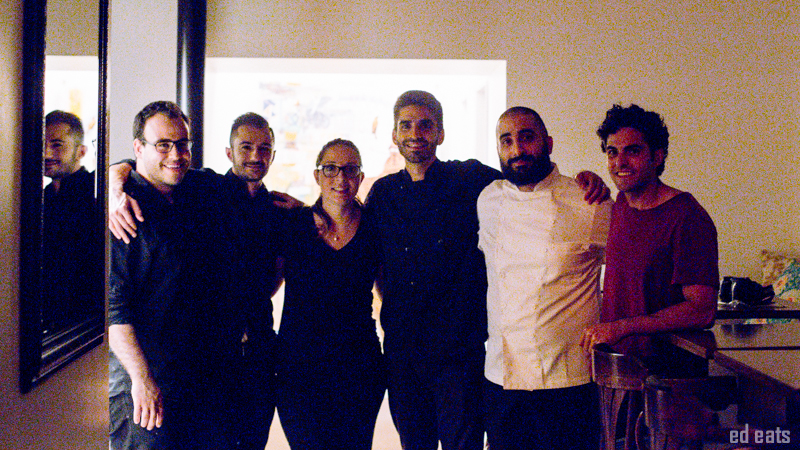 Dinner by Bayan isn’t something you’d go to every day. It’s an event. A unique experience to plan a night around and the staff do their best to make it as special as possible. Absolutely flawless service by a very friendly and personable server group. Professional and attentive without overdoing it.

Bigger eaters amongst us might not be satisfied but most of us will leave not hungry. The word isn’t really ‘full’ but rather that you’re just okay for now and will inevitably want a sandwich a couple hours later. You’re left wanting at each plate (except that salad). There’s never enough to get used to the flavours nor enough time to get bored of them. The menu is never quite the same either.

But again, a meal like this is less about sustenance than it is a means of expression through food. Yes, Burger King is a much better value but you already know what that tastes like before you even eat it. The point of this meal, on the other hand, was to try something you’ve never had: flavour combinations that can only be dreamed up by those who cook for a living.

This kind of tasting event may not be for everyone; $95/$140 is quite in the higher end of restaurant prices but on par with a lot of Vancouver’s fine dining establishments.

Chef Bayan told me he wanted to do something a little bit different and I don’t think he has to worry. I don’t think I’ve ever had a meal exactly like this one. The flavours, the textures, the progression of the courses – you taste the sum of Chef Bayan’s travels and skills.

Hours: Look for future seatings at their websites. Dinner usually begins at 7 p.m.