Seismologists with the federal government say the Devil’s Mountain Fault Zone (DMFZ) stretches over a distance of more than 125 kilometres from the Cascade Range foothills, running through Whidbey Island, and to the Salish Sea – coming just five kilometres south of the city of Victoria. The entire fault system, a series of faults, is entirely situated on the North American tectonic plate, according to study released by Natural Resources Canada.

While thrust (reverse) faults are most common in the region, the DMFZ appears to be a wrench fault, also known as a strike slip fault which releases energy from horizontal compression.

The potential energy and destruction from a rupture of the DMFZ is being compared by seismologists to the two earthquakes that hit Christchurch, New Zealand in 2010 and 2011. The first earthquake had a magnitude of 7.1 and occurred 25 kilometres away from the city, but no deaths were recorded given that it occurred during the early morning hours. It did, however, create NZ$4 billion (CAD$3.6 billion) in damage.

The second earthquake less than five months later in 2011 was highly devastating with 185 deaths and an estimated damage of NZ$40 billion (CAD$36 billion). It happened during the noon hour when people were highly active and had an epicentre just five kilometres away from downtown Christchurch. Many historic buildings were severely damaged, to the extent that the structures had to be demolished.

The existence of an unfamiliar fault line south of Victoria and north of the Seattle region has been researched and speculated for years, but its presence was confirmed only by recent work performed by Natural Resources Canada and the U.S. Geological Survey. Further research is needed to determine whether the DMFZ merges with the San Juan Fault and Vancouver Island’s Leech River and Survey Mountain faults.

However, the potential seismic output from the DMFZ should not be confused for the long-anticipated “Big One” – when a powerful earthquake, up to a magnitude of 9.0, is generated by a significant slip of the Juan de Fuca plate under the North American plate.

The epicentre of this “megathrust” earthquake would have a destructive impact not only on Vancouver Island but also in Metro Vancouver and the Seattle region. As well, in addition to the powerful tremors, a tsunami similar to the waves that hit Japan after the 2011 Tohoku earthquake is possible.

Map of the Devil’s Mountain Fault.

Map of known geological faults in the South Coast of B.C. 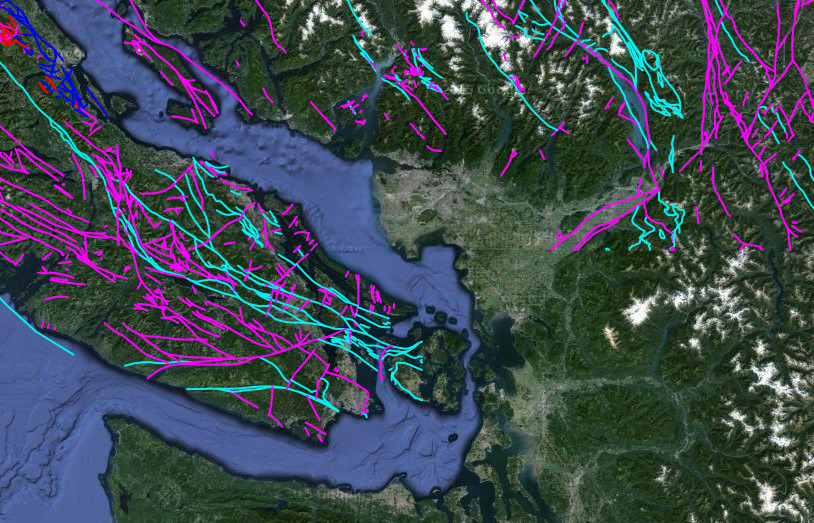