Are you there, Madonna? It’s me, Rob. I’m your number one fan, but not in a creepy Kathy Bates in Misery kinda way. I’m way cuter than her, and definitely not as menacing.

Anyway, you once said in an interview that your “heart belongs to a man who can write beautiful letters”, so I’m a little puzzled as to why you haven’t answered any of my texts. So I thought I’d try to get through to you this way, before your Rebel Heart Tour invades Vancouver later tonight. I’ll be the young(ish), bearish gentleman in row 3, seat 14 who promises to dance and sing and get up and do my thing.

Yeah, that’s from one of your songs.

My love affair with your music started when I was just a kid. It was 1985 and you were still a kid, too. My sisters used to steal all of your records (this was years before Napster was a thing), so I grew up in a house with “Like A Virgin” and “Borderline” playing non-stop. We’d play those suckers so loud that our basement lights would flicker, much to the chagrin of my poor mother who always assumed we were behind on our utility bills.

My sisters eventually moved on to stealing records by Guns N’ Roses and Milli Vanilli, but my love for you never wavered – again, much to the chagrin of my poor mother. She never got the whole BOY TOY thing or the underwear-as-outerwear craze.

In an attempt to set me “straight”, so to speak, I came home from school one day to find her wearing a bra over her “My Friends Went to Bermuda And All I Got Was This Lousy T-Shirt” t-shirt. It was her clever way of showing me how ridiculous the whole “Madonna thing” was, but I was unfazed. In fact, to this day, when I tell that story to friends, I end it by saying “and that’s when we realized that Mom was starting to slip a little bit…”

At the ripe old age of 11, I got a paper route and hid my collection money from my sisters to buy Madonna memorabilia. I had the ITALIANS DO IT BETTER t-shirt from the “Papa Don’t Preach” video, even though I was too young to really know what the “IT” referred to. I had the “Vogue” promotional poster with you in the negligee that I cleverly hid behind my Kirk Cameron poster.

I even had the “Justify My Love” videocassette that you released for sale after those prudes at MTV banned it, despite being way too young to legally buy it – special thanks to the folks at Sam The Record Man for sneakily selling me a copy. Of course, my copy was hidden inside my Shanghai Surprise VHS box as I knew there was no way my parents would accidentally discover it (that movie really was a piece of crap, even though your hair and makeup were flawless).

Let’s jump to 1991, when your Truth Or Dare concert documentary came out. I was 13, five years shy of being able to buy a ticket to see it. So I went to the theatre every week for eight weeks, bought a ticket for Robin Hood: Prince of Thieves and snuck in to see your movie every time. I guess I owe you a little bit of money for that – again, I’ll be in row 3, seat 14 Wednesday night if you wanna swing by and collect.

I devoured every article about the film months before seeing it and found myself in the theatre opening night, dreading that kiss between your male dancers that I’d read so much about. When it finally happened, most of the audience erupted into boos and jeers except for four brave souls in the front row who leapt to their feet and applauded. I saw their courage, and your courage for celebrating the kiss in your film, and for the first time this gay kid felt okay. Better than okay in fact. I felt alive, knowing that I wasn’t alone.

1991 was a very different time – there was almost no gay representation on television or in mainstream movies, and for a lot of us kids back then who struggled with our sexuality, all we had was your music and your videos. You were a champion of the gay community years before it was “cool” or whatever, and I really hope you know how much we appreciate it.

In fact, you pretty much did everything before it was “cool” or whatever. You dry-humped the stage at the first-ever MTV VMA ceremony, years before it was mandatory for every female performer to hump it. You dated Tupac Shakur (AND VANILLA ICE!) long before pop stars dated rap stars in hopes of boosting their street cred.

You even made musicals cool again (sorry Moulin Rouge fans – Madonna did it first). Your turn in Evita was simply the best, and you’re the only actress to ever portray Eva Peron with vulnerability. Yeah, she was ambitious and calculated and worked her ass off to get to the top, but there was a real heart beating underneath that tough exterior. Sounds like someone else I know.

In 2008, I dragged my boyfriend – now husband – Tim to his first Madonna concert in Paris and it was tohu-bohu (that’s French for “pandemonium”). I know that boys who save their pennies make your rainy da-ay, but we spent like a year’s rent on killer seats and you  certainly didn’t disappoint. The show was dynamite and the energy of the crowd was frenetic – Tim almost lost an eye when the drag queen next to him was vogueing too big, but he was so stoked to be in your presence that he couldn’t have cared less.

I gotta tell you, it’s not always easy being married to a huge Madonna fan but I think I’ve worn Tim down. When I told him about my great idea to line our office walls with six dozen Madonna magazine covers (most of which I bought with my paper route money), it was he who drove across four provinces to buy up every black picture frame that Michael’s had in stock. It was totally worth it though – I can’t tell you how many friends have taken selfies in front of that thing. You can see it on Instagram.

I’m dragging Tim to yet another one of your concerts tonight, when the Rebel Heart Tour finally hits Rogers Arena. We had the honour of catching the show a few weeks ago in Chicago and you killed us softly with all of your songs. Your vocal chops on tracks from this year’s Rebel Heart album sounded amazing live, and you somehow managed to reinvent your classic hits in ways that even your die-hard fans could ever dream possible. I’ve included a setlist preview below so everyone attending can practice their lip-synching in advance.

Oh, and I managed to take some pretty decent photos at the Chicago concert, and one of them even found its way to you! You re-posted my pic on your Instagram, Facebook and Twitter feeds but much to the chagrin of my poor mother, you captioned it saying “I believe this man is molesting me!” (the “man” you were referring to was not me unfortunately – it was one of your dancers). No big deal. I still had Kinko’s print me a life-sized copy of our pic and it’s now plastered over my aforementioned Kirk Cameron poster.

I believe this Man is Molesting Me!😂🎩. ❤️#rebelheartour

Alright, I guess I should start getting ready for the concert…I hope you’re doing awesome and I can’t wait for our paths to cross again in a little bit. Oh, and be sure to check Vancity Buzz on Thursday morning for my review of what’s sure to be a killer show. Again, I’ll be the dude in row 3, seat 14 with the Keith Haring tattoos and will do my best to keep my shit together. Unless you bust out “Cherish” on your ukulele – then all bets are off. 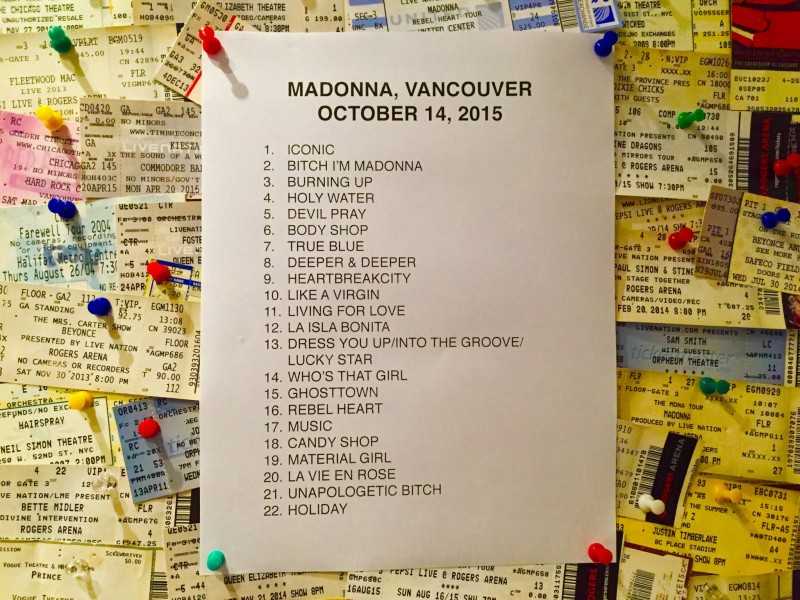