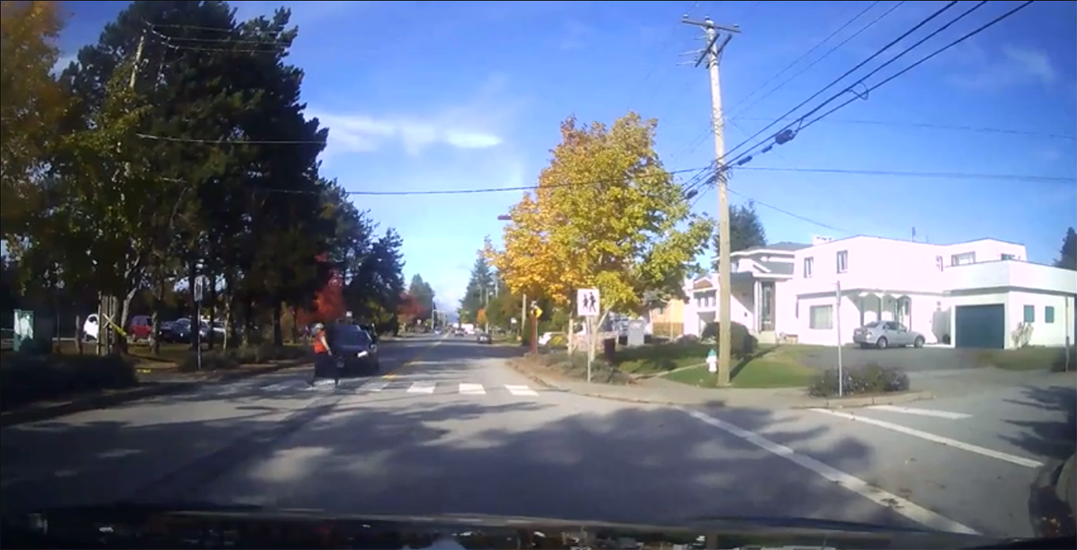 Police are crediting a pedestrian’s awareness after avoiding a potentially serious injury.

Dashcam footage was recently submitted to the Delta Police Department (DPD) showing an incident that took place on Tuesday afternoon on the 9100 blocks of 116th Street, near Delview Secondary School.

A pedestrian narrowly avoids getting hit after a driver rear-ends a vehicle that was already stopped at the intersection.

“The pedestrian left the scene — uninjured thankfully it seems — before police could arrive, but we want to commend them for doing everything right,” said acting-Sergeant Vince Neudorf, of the DPD’s Traffic Unit in a release. “They’re wearing bright clothes, crossing at a marked crosswalk, and waiting for vehicles to stop.”

“Most importantly in this case — the pedestrian was also very alert, and managed to quickly get out of the way when another vehicle slammed into the car that stopped for them.”

The driver who had already stopped at the intersection received minor injuries, with significant damage to their car.

Police say that the driver responsible for the crash was issued a $368 ticket and six points for driving without due care.

“Even at low speeds, when a pedestrian is hit these can be very serious or fatal, particularly when children or the elderly are involved,” says A/Sgt. Neudorf.