UPDATE: Murder suspect Daniel Paul has been arrested by Vancouver Police after one month on the run.

Shortly after 7 p.m. on April 1, VPD apprehended Paul after officers recognized him riding a bicycle on West Broadway near Yukon Street. He was taken into custody without incident.

Paul is alleged to have killed his 36 year-old girlfriend, Rose Paul, in March.

Vancouver Police are seeking the public’s help for any information leading to the arrest of Daniel Alphonse Paul, who is wanted in connection with the murder of his girlfriend, Rose Paul – and are offering a reward of up to $10,000.

On March 3, the body of Rose Paul, mother of five daughters, was found in the basement suite of a home on East 22nd Avenue near Main Street.

Daniel Paul, 42, has been identified as the primary suspect in the case. 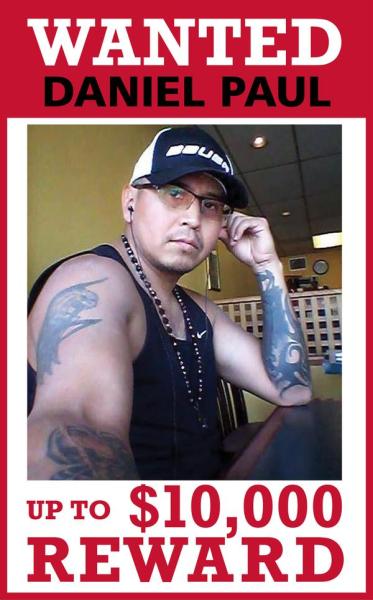 “Daniel Paul remains on the run after numerous pleas by the police to have him turn himself in,” VPD spokesperson Sargeant Randy Fincham said. “Daniel is to be considered dangerous and anyone who knows his whereabouts is asked not to approach him and call 9-1-1.”

Paul is Aboriginal, 5’8″ tall, with a medium build, brown eyes and short black hair. On his left arm are tattoos of an eagle, rat, knife, skull and buffalo. On his right arm he has tattoos of a skull with a rose and a heart.

“This man is very dangerous,” said Howard Paul, Rose’s uncle. “He needs to be taken off the streets before he hurts or kills another woman. Rosie loved and trusted this man. He was supposed to protect her, but instead he took her life.”