Raven Spirit Dance Society shares contemporary dance from a distinctly Aboriginal worldview. Earth Song, containing Northern Journey, Frost Exploding Trees Moon, and Spine of the Mother, deeply spoke to the connections individuals have between the Earth, their identity, and themselves.

Northern Journey, choreographed by Michelle Olson in collaboration with performers Jeanette Kotowich and Brian Solomon, was a simple work that allowed the bodies to carve through space while fluidly moving around the stage. Wearing matching costumes and having similar general appearances, Kotowich and Solomon graced the stage with a powerful awareness and embodiment of the work. 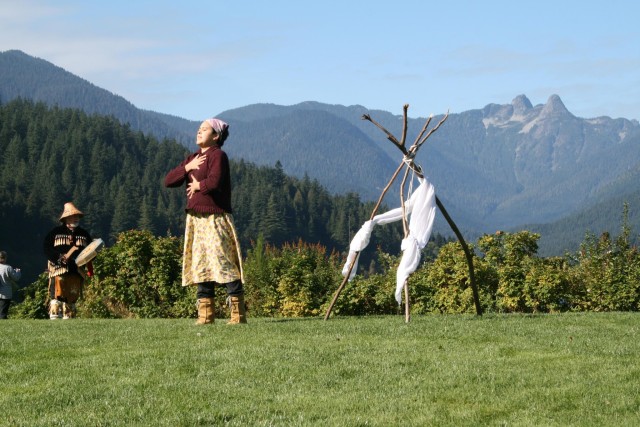 The second piece in Earth Song, Frost Exploding Trees Moon, a solo work by Michelle Olson, used a modest movement score based off the body positions of Indigenous hunting cultures. Where hunting is stereotypically associated with masculinity, Olson created beautiful images based on femininity and womanhood. The temporary nature of hunting was reflected in the attention Olson paid to her breath and environment she created on the stage.

While each piece had a slow pacing that often asked for an active attention instead of naturally grabbing attention, Earth Song was tied together by the importance of the connection between the individual and the nature they co-exist in. The three pieces maintained a similar, raw quality that emphasized the importance and beauty of Indigenous culture in Vancouver within the expressiveness of contemporary dance.