On Tuesday, the Dallas Stars and Carolina Hurricanes unveiled new home and away jerseys for the upcoming 2013-14 season.

For Dallas, a new jersey design has been a long time coming. The classic “star” jersey was tragically put to rest in 2007 when a league-wide jersey redesign took place to match a new Reebok template (the same time Vancouver introduced its Orca/Stick-in-rink lovechild jersey). 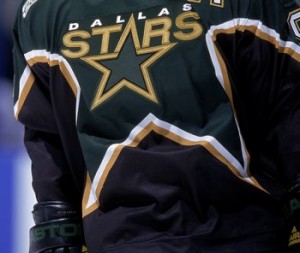 This original idea was replaced by what could arguably be called an uninspired concoction, with the Star’s own logo being relegated from the jersey’s chest. 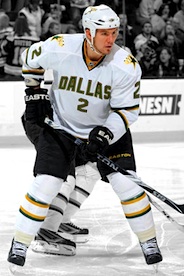 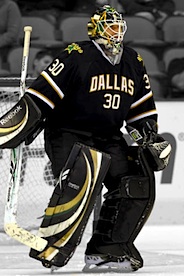 Then on Tuesday, the Star’s organization presented these:

Out went the gold trim, the heavy use of black, and the traditional logo. In came emerald green, a Dallas Cowboys star with a “D” thrown in, and silver. After all, owner and part-time stargazer Tom Gaglardi said that “…if you look in the sky and look at a star, it’s more silver than gold,”.

As long as he likes it, and just enough jerseys fly off the shelves, these green sweaters will be a mainstay in the new Central division.

Carolina also presented “new” jerseys, but unless you’re an equipment geek, or a die-hard fan of the ‘Canes, you might not be able to tell the difference between this: 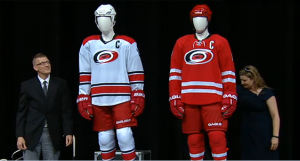 Some reddit users of r/Hockey even pointed out, using Eric Staal as a model for each of them, that the new Carolina jerseys bear a striking resemblance to those that Hockey Canada have used since 2008.

Do you think the Stars or Hurricanes made the right moves? If you abhored these decisions (as I do), then you can at least be thankful that we don’t have to see these jerseys more then three or four times a season.

Vyas Saran is Vancity Buzz’s Canucks Columnist. Follow him on Twitter for more Canucks news and NHL updates via @vyassaran.