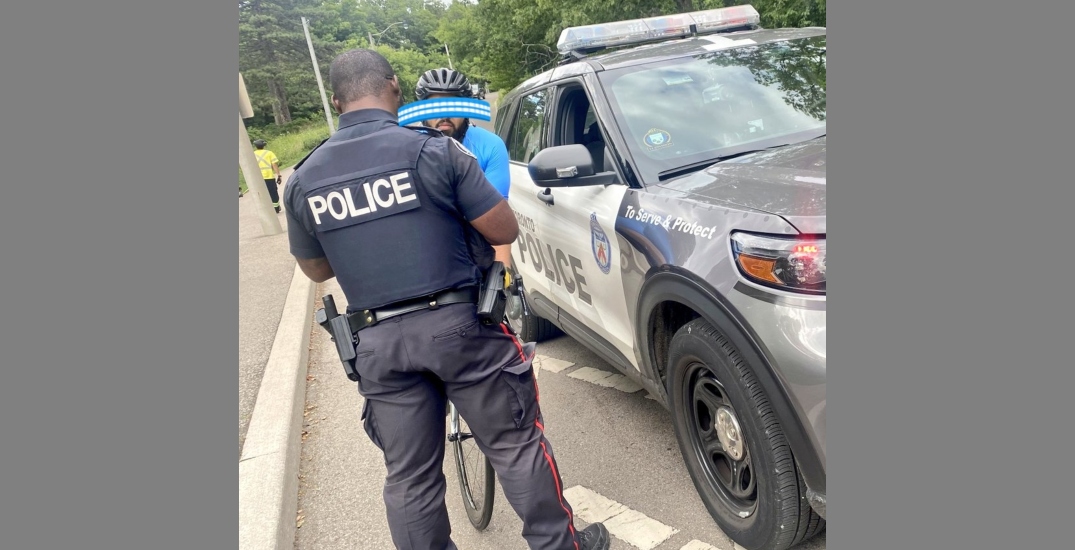 In a photo posted on Twitter on July 25, a cyclist can be seen wearing a blue T-shirt and a black helmet as he watches a Toronto police officer give him a ticket for riding his bike six kilometres above the 20-kilometre limit.

“Armed Toronto police officers continue to harass cyclists in High Park,” wrote Dave Shellnut. “This person was ticketed for going 26 in a 20. All I feel is rage.”

Shellnut is the founder of The Biking Lawyer, a group of personal injury lawyers “for injured cyclists and vulnerable people, deeply committed to the betterment of our communities.”

The post already has 632 likes and a lot of angry comments from equally frustrated cyclists.

This should make us all angry. We should not accept this. For example, on Lansdowne between Bloor and Dundas there has never been any enforcement – while cars and trucks speed excessively every day – all day. Fix this! @anabailaoTO @TorontoPolice https://t.co/ezXpnlUfK6

“The police are not just handing out tickets, they are using their SUV to give chase while breaking the speed limit in the park, on car-free day with no lights or warning signals. Which is something I observed,” wrote one commenter.

To which another Twitter user responded, “Not only is that nuts, it’s such a pointless waste of resources.”

Another pointed out the double standards, stating, “Cops won’t even look at a driver going less than 15 over. This is just anti-cycling, pro-car bullshit.”

Twitter users pointed out that since bikes don’t have to be equipped with speedometers, it’s unfair for law enforcement to expect cyclists to know how fast they’re going.

Daily Hive has reached out to Dave Shellnut and Toronto police for a comment.