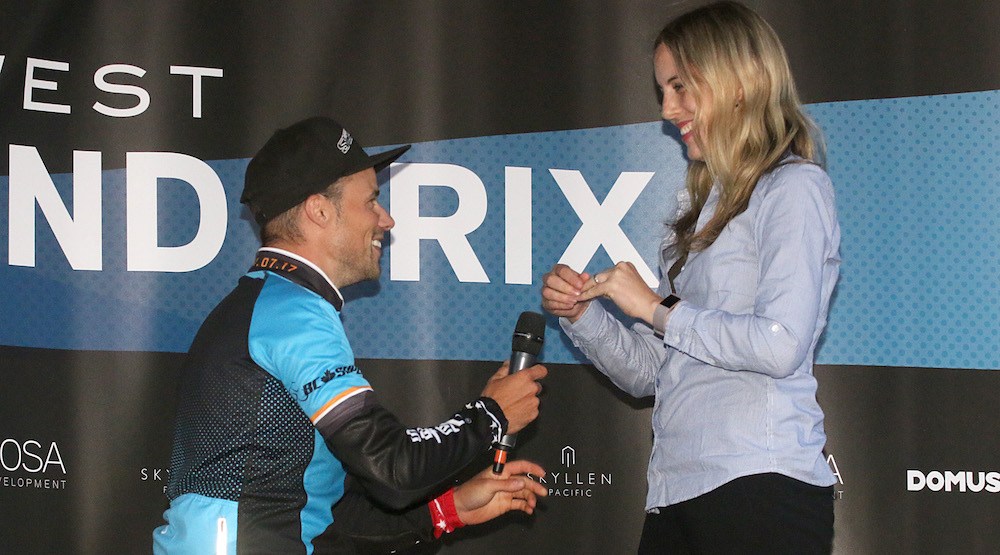 It was like a scene out of a movie.

Florenz Knauer, peddled his way to victory at the inaugural New West Grand Prix on Tuesday.

Knauer finished the 50-lap circuit in one hour, four minutes, and 17 seconds. The 28-year-old cyclist has had a lot of success at the BC Superweek series, with multiple podium appearances over the years, including a third place finish in Friday’s MK Delta Lands Criterium and Tuesday’s win.

Then came the movie scene.

With microphone in hand after the podium presentations, in front of a crowd of people, Knauer got down on one knee and popped the question to his longtime girlfriend, Alisha Lundgren.

“I want to ask you, Alisha, will you marry me?”

She said yes, of course, and Florenz put a ring on her finger and planted a kiss on her lips.

But the BC Superweek connection doesn’t stop there.

Florenz and Alisha met when the cyclist arrived in Vancouver for BC Superweek in 2012. Like many racers, he relied on host housing during his stay.

Alisha was the daughter of the woman who ran the host housing program.

They maintained a long distance relationship for three years before Knauer left his life in Germany and moved to Vancouver last year.

Proposing at a BC Superweek event made perfect sense, although, he initially intended to pop the question after the more high profile Gastown Grand Prix on Wednesday.

“Actually, I had it planned for Gastown tomorrow, but after the win today, I had to do it,” said Knauer. “Tomorrow I might have crashed or something.”

A bird in hand is worth two in the bush, right?

“I was more nervous for the podium presentation than the entire race. It kept me awake the last couple of days too, I was trying to sleep, but kept thinking about it. It’s a big step for me, but it’s definitely the right one and I’m glad she said yes!”