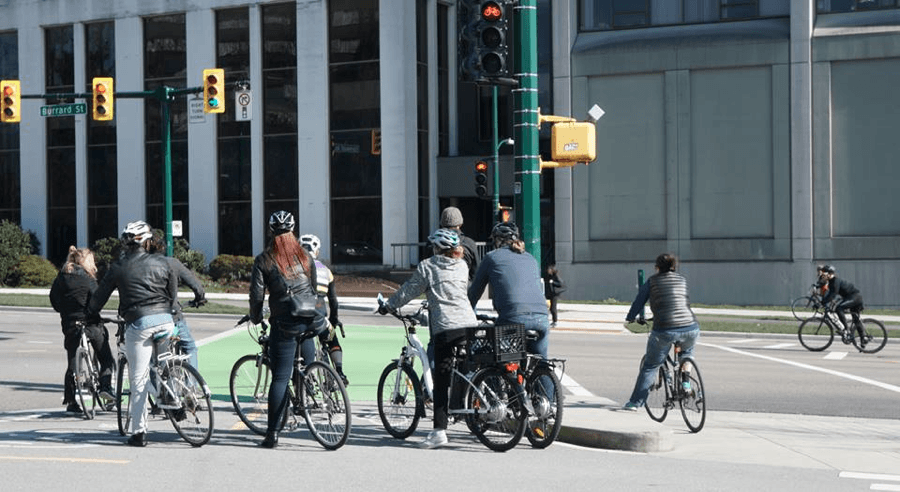 Whether at the office or a social function, mention to a colleague that you happened to cycle there, and you’ll get a familiar reply: “I’d love to ride my bike more, but I just don’t have the time.”

As a riposte, HUB Cycling’s Acting Executive Director Laura Jane likes to flip that logic on its head. “I usually explain to them that I don’t have time not to bike,” she says. “I work full-time and also study part-time. I enjoy spending time with my family and friends, travelling, and hiking. The last thing I want to do is spend my life stuck in traffic or working even longer hours to pay for a private car.”

To debunk this myth, for the past nine years, HUB has hosted an annual Rush Hour Challenge.

“It’s a friendly competition between people cycling, people on transit, and people driving,” Jane says, “To see who can get downtown during rush hour in the fastest, most enjoyable, and most affordable manner.”

Since the event began in 2009, one mode has ruled supreme in terms of speed.

“People on bikes have beaten their car-driving counterparts more than two-thirds of the time,” Jane says. “A lot of people are surprised by that, because they don’t realize how fast and convenient cycling for transportation can be.”

This is confirmed by a 2017 study from the German Federal Environmental Agency, which determined that–in an urban setting–bikes are faster than cars for trips up to five kilometres. As it turns out, drivers vastly underestimate time spent sitting in traffic, searching for parking, and walking to their final destination. 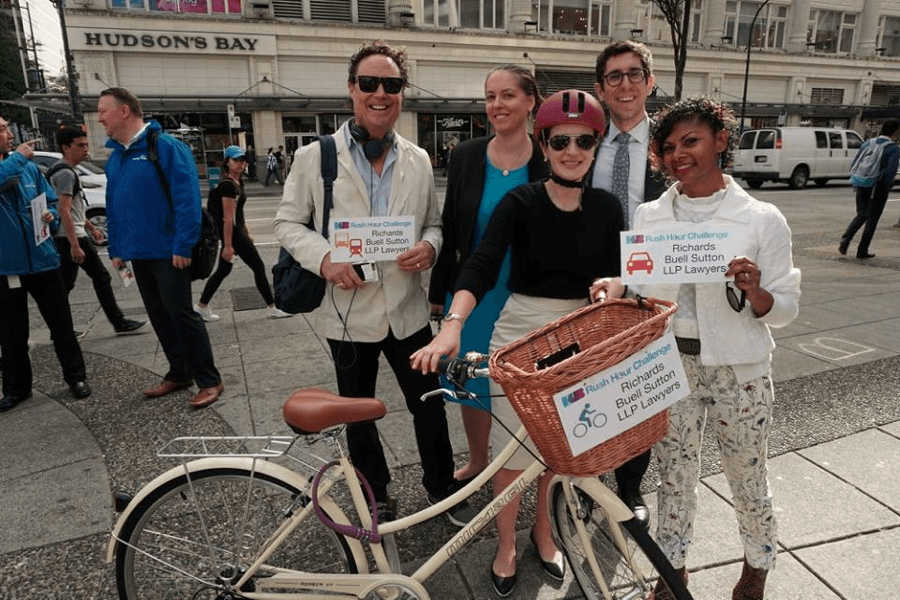 Richards Buell Sutton LLP had a team in HUB Cycling’s 2017 Rush Hour Challenge. Most of the people who biked arrived before their car-driving colleagues (HUB Cycling)

Many drivers also neglect the time devoted to owning and maintaining their car, including the amount of work time spent paying for it. When those additional hours are taken into consideration, an average trip speed of 30 km/hr is reduced to an effective speed of just 12 km/hr. Whereas the bicycle, taking into account all of the same variables, averages an effective speed of about 17 km/hr.

With all that said, there are still a number of things one can do to simplify their cycling routine, and making those time savings add up even more.

“My advice is not to overthink it,” Jane says. “As soon as you start believing you need a bunch of gear, your trip becomes a bit more time intensive.”

By pedaling at a slower pace on an upright city bike, wearing her regular clothes and shoes and putting her purse in her bike basket, Jane arrives where she’s going without the need for a shower or change of outfit.

In recent years, she has even gotten in the habit of locking her bike outside her apartment building, rather than dragging it in and out of the basement each day.

“I did the math, and I figured it took me an extra eight minutes a day to get my bike from downstairs. That’s almost an hour a week,” she says. “Having an inexpensive bike with a really good lock means you can park it in the most convenient of places, and not worry so much about it getting stolen.”

Jane recognizes not everyone is fortunate to live in proximity to their daily destinations, and sees opportunities to combine cycling with transit to make longer commutes more convenient. She also sees the rise of electric-assist bicycles as one way to level the playing field, where bikes can suddenly compete with cars for trips between 10 and 20 km.

“There’s huge potential for e-bikes here,” she says, pointing to resources like the Momentum Mag Bicycle Lending Library, which loans e-bikes to anyone interested in taking one for a test drive.

“People can try them without necessarily committing upfront,” she says. “They’ll see firsthand if it makes it faster and more convenient for their lifestyle, which hopefully will encourage them to bike more often.”

HUB Cycling, a registered charity that works to get more people cycling in Metro Vancouver, is celebrating its 20th anniversary in 2018. #20ReasonsToBike is a HUB Cycling initiative sponsored by Modacity and multiple media partners, including Daily Hive. Throughout 2018, HUB Cycling will be publishing articles showcasing the many reasons why more people cycling makes happier, healthier and more connected communities. For more information visit bikehub.ca or check out #HUB20.