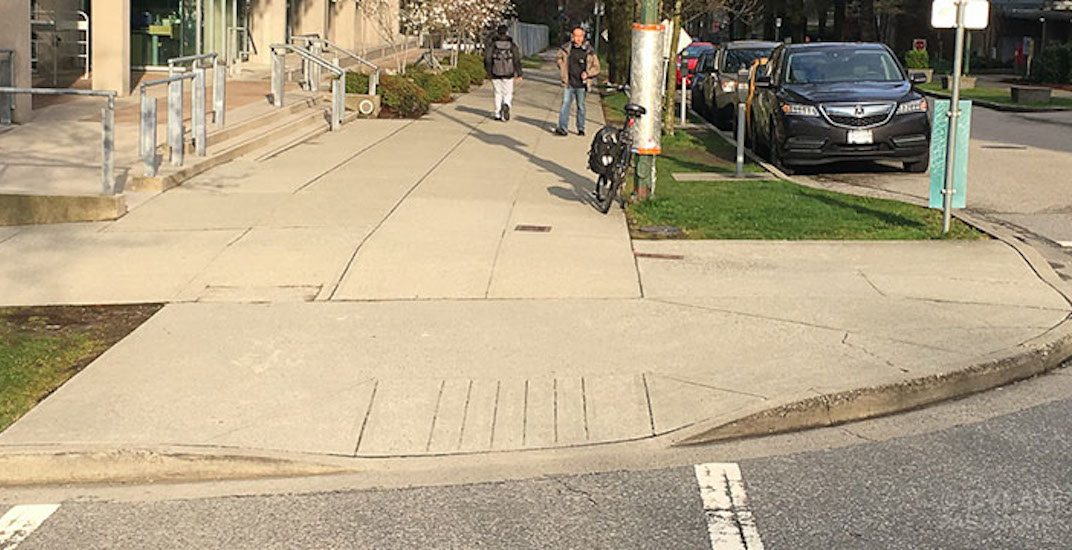 Curb ramp on a Vancouver sidewalk. (City of Vancouver)

The City of Vancouver says it will be installing over 140 additional curb ramps on sidewalks across the city over the coming months.

This new initiative is supported by funding from TransLink’s Walking Infrastructure to Transit program, with a focus on walking routes near schools, hospitals, senior and community centres, and are within 400 metres of the Frequent Transit Network.

“Transit is key to the success and livability of Metro Vancouver, so we want to ensure it’s accessible for everyone,” says Geoff Cross, Vice President of Planning and Policy at TransLink, in a statement.

“We are currently in the midst of a much-needed and unprecedented expansion of the transit system. Partnerships and projects like this one reflect that investments are more effective when we consider the door to door journey, including safe, accessible and convenient sidewalks.”

Construction will occur beginning in September through the end of the year. This is in addition to the 100 to 200 curb ramps that are installed by the municipal government in a typical year.

“Curb ramps make sidewalks accessible for people using strollers, wheelchairs, walkers, canes, and other mobility aids,” said Jerry Dobrovolny, General Manager of Engineering Services. “It’s important to us that all residents are able to participate fully in the community regardless of ability. As engineers, building streets and sidewalks to be accessible for everyone is one way that we can facilitate that participation.”