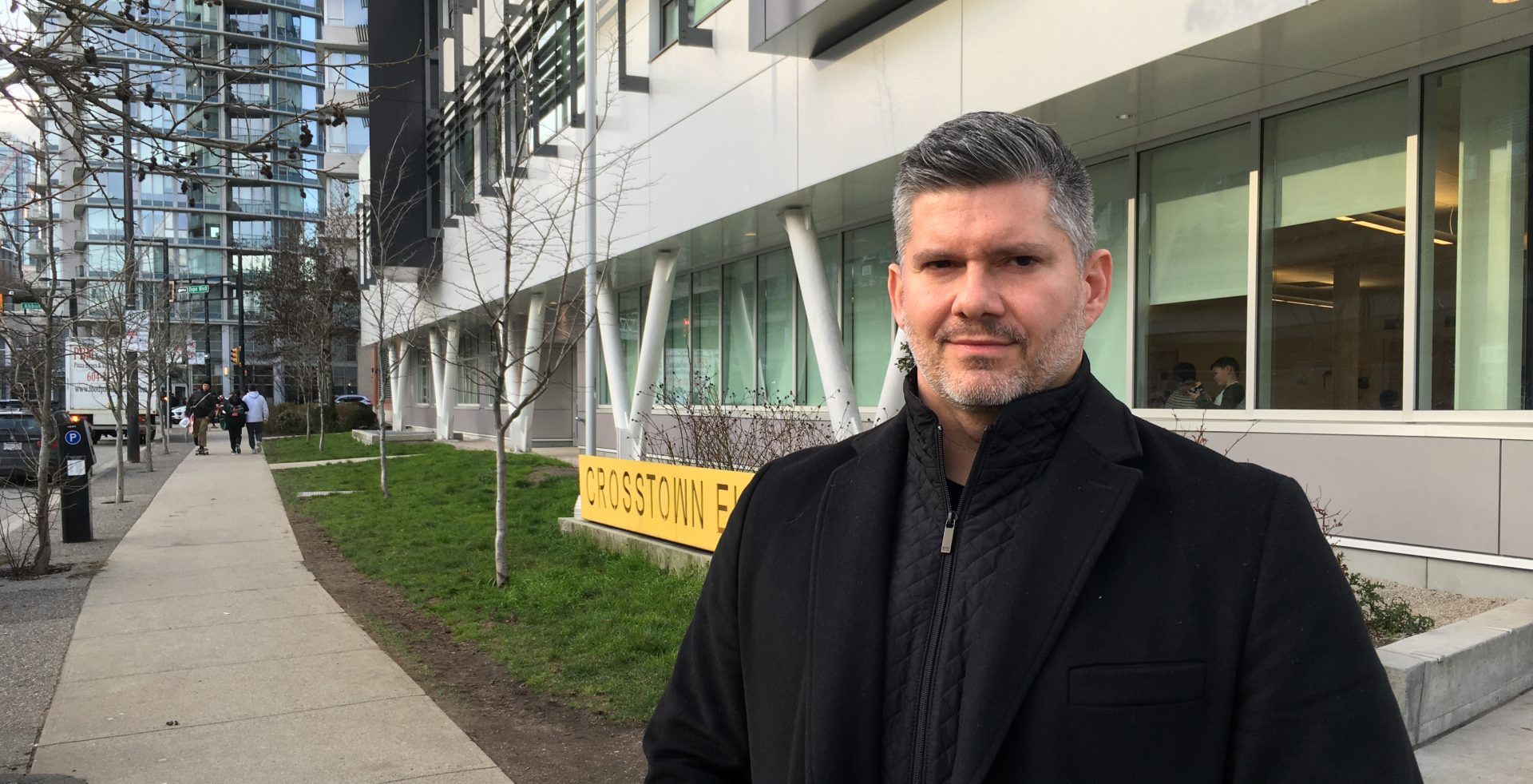 Brent Toderian is a long-term thinker.

He’s Vancouver’s former chief city planner who’s married to another urban planner. It’s natural for them to make meticulous arrangements so their future pans out.

That’s why the family moved to Abbott Street in downtown Vancouver 10 years ago. The car-free lifestyle and short, active commutes in the downtown core appealed to them, and their home is across the street from Crosstown Elementary — a primary school that opened three years ago.

They can see the school out the window, and always thought their kids would attend it. But that hope was dashed this week when Toderian found out his five-year-old son lost in a lottery for a spot in the kindergarten class.

“We moved literally across the street from the school, so, ironically, we are the furthest away from the next school. We are the worst impacted by not getting in,” he said.

The way Toderian sees it, the outcome is a “result of bad planning, and I don’t mean by our family.”

Public school enrollment is declining in Vancouver as a whole, according to a statement from the Vancouver School Board. But 12 schools are full, including Crosstown Elementary.

To be fair to families, in-catchment students at full schools are offered spots based on a lottery system. Students with siblings already at a school are given priority before spots are awarded to the rest of the kids at random.

Daily Hive asked how many kids were in the Crosstown Elementary lottery versus how many got in, but the VSB did not answer the question.

For Toderian, the situation is frustrating. He’s seen leadership from City Hall to make downtown Vancouver friendly to families, and is disappointed the lack of neighbourhood schools is derailing that vision.

He’d like to see more creative solutions to full schools, such as renting out office space to use for classrooms (similar to how suburban schools use portable classrooms).

What’s an “urban portable?” With vertical urban schools there isn’t the land to plop a portable down. As I’ve said in every media interview this week, find available office space or shopping mall space nearby to lease. For Crosstown Elementary, Tinseltown Mall is right next door. pic.twitter.com/g5HKPtruJw

BC’s Ministry of Education said it understands concerns from parents who want their children to attend school in their neighbourhood, but said school districts are responsible for reviewing enrollment, catchments, programming, and setting their own capital expenditure priorities to make sure families’ needs are met.

The VSB wants to build new schools in Coal Harbour and Olympic village. Those projects have been on the district’s capital priority list “for some time,” their statement said. A Coal Harbour school has been approved, and could be complete as early as 2023.

But Toderian thinks the school district is moving too slow, waiting to see the “whites of kids’ eyes” before committing to additional space. He  wants to see more proactive planning to keep families downtown.

“Much of the blame goes to the funding model and the attitude and culture around school decision making,” he said, acknowledging there are limitations on school board budgets, flexibility, and creativity.

He added he’s willing to lend his urban planning experience to the district and Ministry of Education pro bono to tackle the problem of school space in downtown Vancouver.

I help smart, creative cities & governments all over the world. I’d be willing to help @vsb39 @Rob_Fleming, @janetrfraser @RobSchindel QUICKLY RETHINK the approach to school space in downtown Vancouver, FOR FREE, IF there IS SERIOUS commitment to the process & to REAL solutions.

In the meantime, Toderian’s family needs to decide whether to send their son to a further public school (and perhaps buy a car to drop him off), or pay tuition at a downtown private school.