Have you ever dreamt of being on the TV show “Friends”? How many of your friends say you are a “Joey” or a “Phoebe”?

Well, one local man is trying to make that dream become a reality.

Anil Patel posted a Craigslist ad looking for a crew of people who can play each character from the show and meet periodically at a coffee house or their apartment.

In the ad, he says he is looking for an apartment that’s similar to Rachel and Monica’s (complete with purple walls) and that he would play Chandler.

Anyone applying to be Chandler will not be considered. Patel adds that Gunthers need not apply.

Cellphones are strictly forbidden since the recreation is “loosely based” on season four in 1997 and he wants to keep the experience authentic. 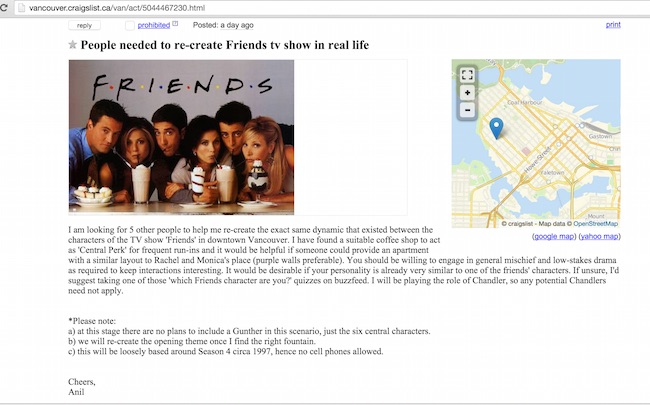 Vancity Buzz caught up with Patel to find out more about his crazy 90’s-themed experiment.

Vancity Buzz: First off, everyone wants to know: is this a joke, or are you serious?

What prompted you to want to recreate “Friends?”

I’m a big believer in community, so I thought what more efficient way is there to create community?

I have a couple of locations already scouted. At the moment it is a race between Melriches on Davie and Delaney’s on Denman, it really depends on which owner is willing to let me move my three-seater couch into their shop.

Why not “Seinfled” or another zany 90’s sitcom? Why “Friends”?

“Seinfeld” had too many secondary characters (Soup Nazi, Frank Constanza, Newman, etc) so casting would be a nightmare, while “Dawson’s Creek” involved too many walking sequences and crying. “Friends” perfectly captures what we all strive for- working full-time while never actually being at your job.

What do you hope to get out of this experiment?

What’s the response been like? Do you have any characters lined up?

So far the response has been pretty interesting and far exceeded my expectations. A lot of people think they’d make a good Ross, which makes sense for the West End I guess. Phoebe has also been popular one. I think the real challenge will be finding a good Monica, as we all know she is the ‘glue’ in the TV show.