A few weeks ago Karm, the co-founder of Vancity Buzz, asked a fairly innocuous question during a routine meeting. He asked someone to help research and report on the craft beer community in Vancouver. While I am sure he had something more professional in mind, my passion for a good laugh and couple of pints made me the fastest to react.

Three weeks later I found myself at ‘The Butcher & Bullock,’ a well known Donnelly Group joint, for a ‘Beer Drinkers Tasting.’ At first, I thought it was an elaborate hoax. Surely enjoying some Ninkasi craft beer along with a well rounded meal can’t be considered work? Fortunately, the elegant menu in front of me confirmed it to be true. Three craft beers supported by four courses, including a Canape which, in all my sophistication, I determined too small to count but too big to ignore. 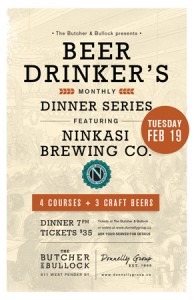 Thankfully however, I found myself beside Rick Green, the self professed ‘Evangelist’ of Vancouver Craft Beer Week. While I was able to confirm all the big things with insightful terms like ‘delicious’ and ‘more please,’ Rick was there to confirm the small ones, like how the hoppyness of the ‘Believer Double Red 6.9% Ale’ beautifully complimented the salt of the hazelnuts and slight bitterness of Chef Alvin Pilllay’s perfectly made Chocolate Ganache, which I hurriedly confirmed.

As the night progressed, and we began to settle in, so did my appreciation for what the good people at Ninkasi Brewing Company are doing. I am never one to shy away from a craft beer but Kurtis Sheldan, along with founder Adam Henderson, seem to genuinely value what they do. They are working to create something authentic and anyone who has had the good fortune to have the right beer at the right time at the right place can attest to the value of that.

While it may be some time before I am in Rick’s league of understanding, I can impart two bits of wisdom on you. First, 35 bucks at a Donnelly tasting gets four courses, three pints, a bit of a beer drinker and foodie education and hopefully a couple of laughs. Second, from the Oatis Oat Stout to Total Domination IPA, the people at Ninkasi know how to make a damn good beer.

If you would like to invite me out to enjoy the fruits of your labour or want to connect, you can follow me at @danno_go or check out my personal website Urban Sherpa.