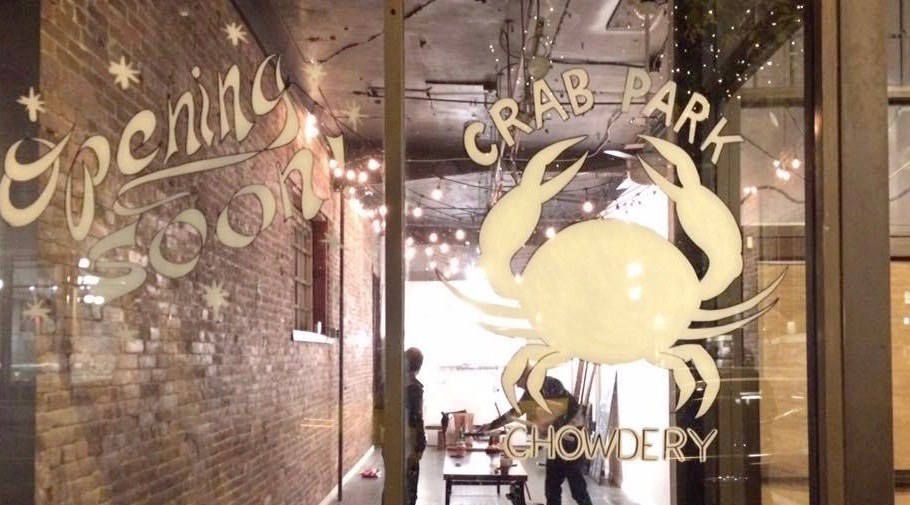 The Crab Park Chowdery is open and ready to give Vancouverites a taste of San Francisco right here in YVR.

The eatery, which opened mid-January, currently offers a handful of comforting favourites including classic clam chowder, vegan chili, loaded baked potato soup, and last but not least, a smokey tomato soup served in a sourdough bread bowl lined with American cheese – yes, essentially a built-in grilled cheese with your soup.

Along with these staple items, Crab Park has a rotating ‘Chowder of the Day’ (currently corn chowder), and a selection of craft sodas available.

The concept for this spot was inspired by owner Ashton Phillips’ childhood trips to San Francisco, where he remembers devouring hot chowder served in bread bowls on the pier with his family.

“I always used to go to Pier 39 and places around the wharf that had clam chowder and chowder bread bowls,” says Phillips.

Just over six years ago when Phillips moved to Vancouver, he saw the absence of chowder in the culinary scene, so he decided to team up with Crab Park investor Patryk Drozd to develop the concept and business plan for the venture.

Drozd comes with a ton of experience in the industry, as he is also the owner of The Cobalt, The Boxcar, The American, and Good Company Lager – which Crab Park will be serving once its liquor license gets cleared in a few weeks.

The new Gastown restaurant is operating in a 750-square foot space located at 221 Abbott Street. This space was the previous home of The Capilano Tea House cafe. Phillips told Daily Hive via phone that the competition for this particular lease was stiff (we’re talking 14 offers), but Crab Park came out victorious, and he and his team couldn’t be more pleased with the final location and menu.

“The location is near the Lamplighter, The Flying Pig, and a lot of the other established restaurants and bars in Gastown. We’re the new kid on the block just trying to make really, really good chowder,” says Phillips.

All of the recipes at the chowdery were developed by Phillips’ cousin, Chef Patrick Hennessy of Kissa Tanto. Hennessy has previously worked in premier restaurants in Vancouver and around the world such as Michelin star restaurant Eleven Madison Park in New York.

“It’s been pretty exciting to have people tell me this is the best chowder they’ve ever had. Whenever that happens I call Patrick and give him a virtual pat on the back” says Phillips.

Crab Park doesn’t have a full-service kitchen in the restaurant space itself, so the chowdery uses commissary kitchens in order to help produce their recipes and dishes.

The restaurant’s space is very simple, exposed brick and wood details serve as the backdrop for the long bar that wraps around the space. With seating for about 16 people, a TV mounted on the wall for guests to enjoy, and good music bumping all day long, we predict this cozy spot will become a favourite Gastown hangout in no time.