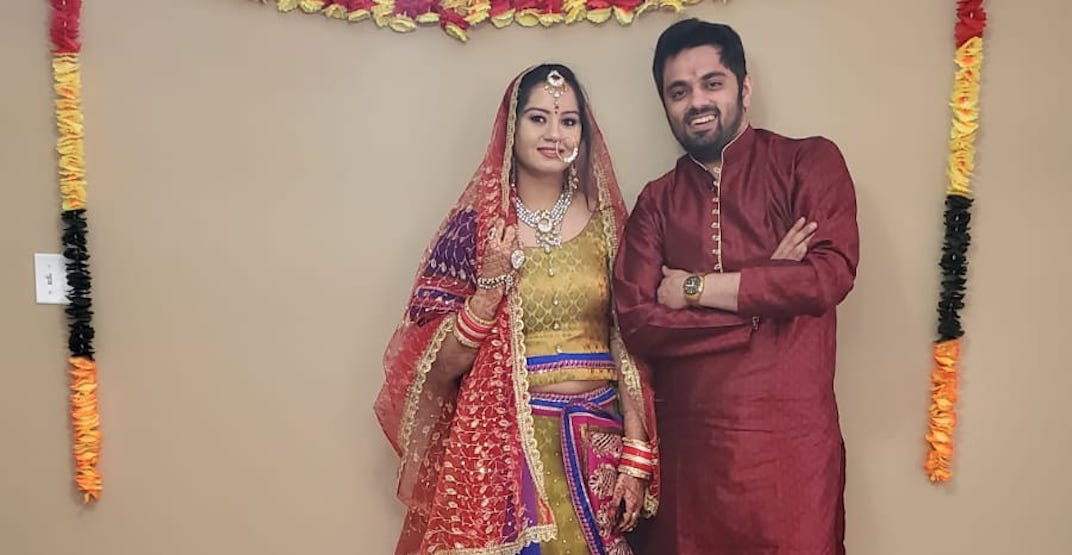 Nearly 500 guests attended the traditional wedding of a couple from Edmonton, Alberta, even though the ceremony wasn’t held the way the couple had originally intended.

Megha Sharma and Gaurav Sapra had initially planned a multi-day wedding celebration to take place in Delhi, India, where the couple is from, but due to the COVID-19 pandemic, they were ultimately forced to cancel.

“The initial plan was to travel to India on March 30, and we had booked our tickets and we had also done all the venue reservations in Delhi,” said Megha Sharma in an interview with Daily Hive.

“The date we had decided for was April 17, and we had a sagan ceremony, which is a ceremony where the couple’s family’s offer blessings for the couple, scheduled on April 15.”

Photographers, musicians, bungalows for out-of-town guests, henna artists, makeup artists, and wedding outfits had all been pre-planned by the couple ahead of their wedding.

“As the date got closer, and we were approaching March 30, we realized we are not able to travel to India because of flights being cancelled, and if people were able to make it, they would have to quarantine for two weeks,” said Sharma.

The couple’s families came to the conclusion that they did not want to postpone the wedding and decided the couple should at least get legally married.

“On April 14, Gaurav and I went to one of the Edmonton registries and we got the marriage certificate, though they were asking us, ‘Are you sure you want to do the wedding in COVID?’ And we said, ‘Yes, we are going to do it,'” said Sharma.

“Our elders said its really inauspicious to postpone the date, and Gaurav and I haven’t been to India in almost four years. I haven’t even met Gaurav’s family, but my parents went to India to meet his family a while back.”

After the couple got their marriage licence, Megha’s sister, Swati, and brother-in-law, Anurag, came up with the idea to plan a virtual wedding to take place the same day as their original wedding in India.

“My sister said, ‘If you’re doing a legal wedding, then why not get the rituals too, because right now we have everyone healthy and safe around us, and we cannot predict the future,'” said Sharma.

In three days, the couple and her sister and brother-in-law got everything necessary to host a traditional Indian wedding, including the pre-wedding ceremonies and rituals that would have taken place in the presence of family. 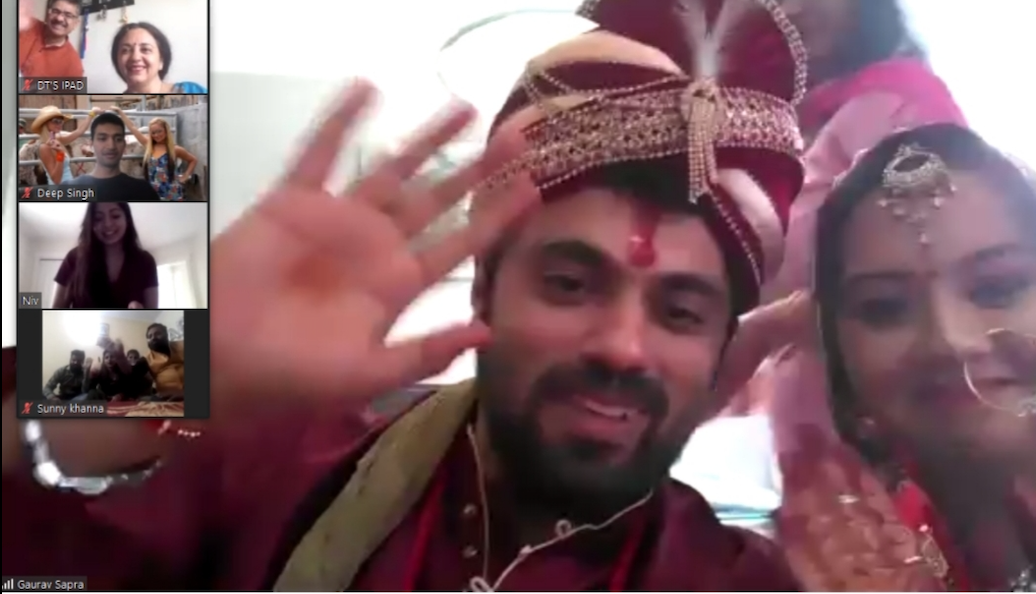 They contacted a priest from Edmonton’s Hindu Temple, and after confirming both the priest and the couple’s family had been safely quarantined and self-isolating for over a month, they went ahead with the ceremony at Megha’s sister’s and brother-in-law’s home.

Anurag and Swati were the wedding event planners, organizers, hosts, photographers, and chefs.

“We went to a nearby Indian grocery store, where we were able to find the things needed to carry out the wedding and ceremonies,” said Sharma.

“My sister applied henna tattoos on my hands and my feet, and Gaurav has his cousins and relatives living nearby, and they dropped a package as a gift for me at the door, including henna cones.” 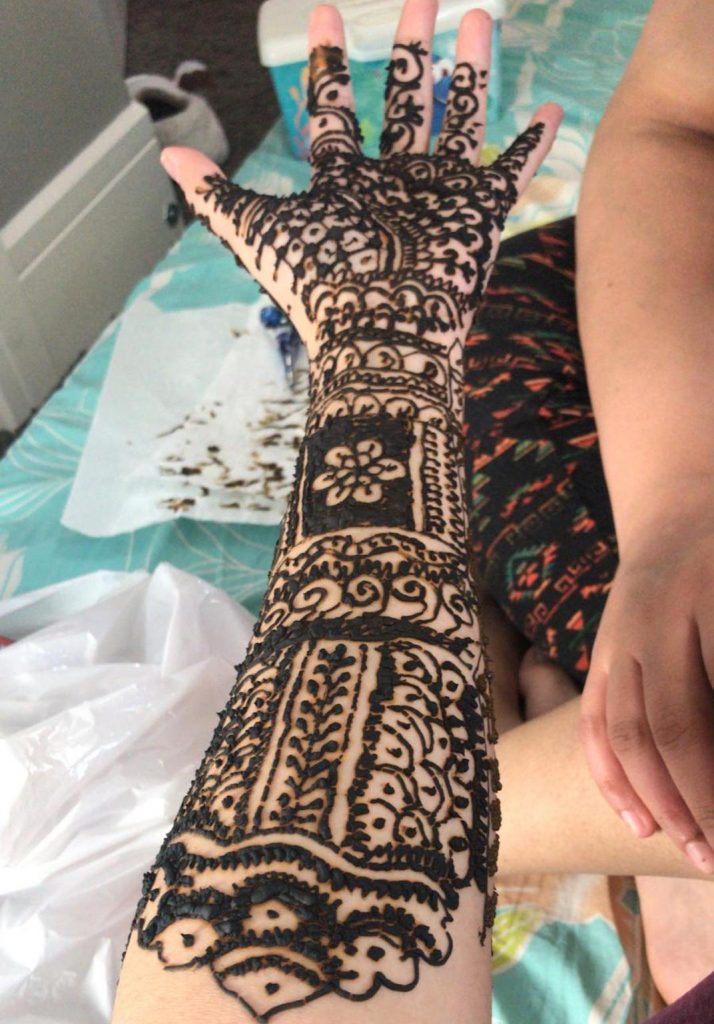 On the big day, Megha woke up extra early to get herself ready, while her sister and brother-in-law finished preparations for the wedding ceremony.

“I did my own hair-do, my own makeup, the best that I could do. I woke up almost around 5 am to get myself ready all by myself,” said Sharma.

The couple dressed in traditional clothing, which luckily, they had on hand, with Megha wearing a lengha she had purchased years prior, and Gaurav wearing a kurta pajama gifted to him by Megha’s parents.

On the day of the wedding, hundreds of the couple’s relatives and friends were well-dressed in traditional clothing for the virtual party, dancing to music in their own respective homes with feasts they had cooked for themselves.

“We had three laptops and three zoom accounts. One laptop was dedicated to Gaurav’s parents and brother in Delhi, and it was connected to one big TV screen in the living room so that he could feel that his family is right there with him,” said Sharma.

“On the second laptop it was all of Gaurav’s relatives and friends connected, and on the third laptop, we had my family, friends, and relatives connected from all over the world.”

The couple, who met in 2015 while they were both studying at MacEwan University, said that married life is going great, even given the current circumstances. 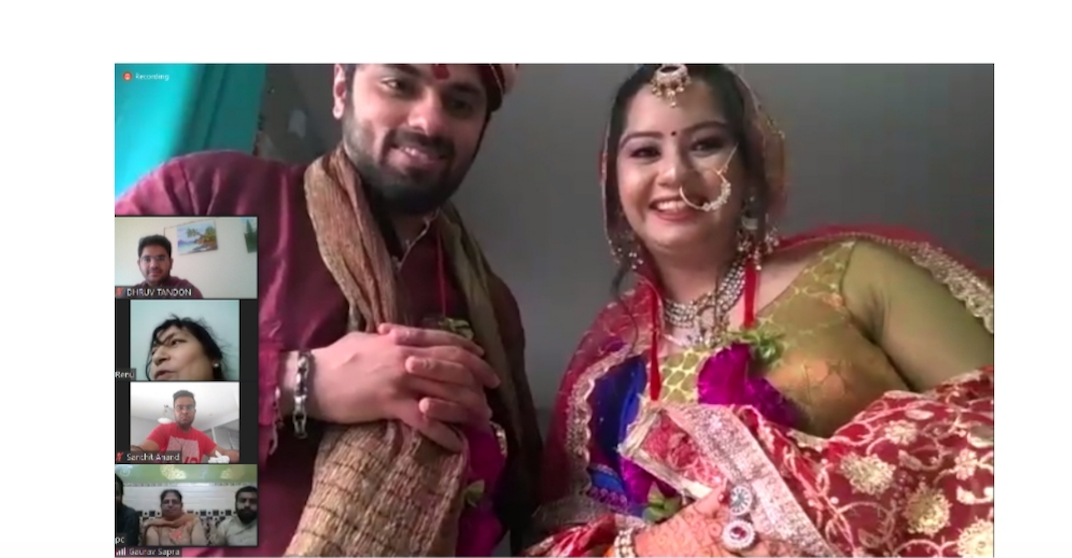 “It’s been a week and a half, and it’s going really good … because we are getting to spend a lot of time with each other,” said Sharma.

“One of the rituals in the Punjabi weddings is that until the bride’s henna fades away, the family doesn’t allow her to do any household work. Gaurav is taking very good care of me: he’s not letting me work in the kitchen, and he has learned to cook Indian Punjabi delicacies for me.”

The couple is happy with their decision to get married and are looking forward to continue enjoying each other’s company in married life.

“We are so happy we did not postpone the wedding. We really wanted to enjoy our current moment.” 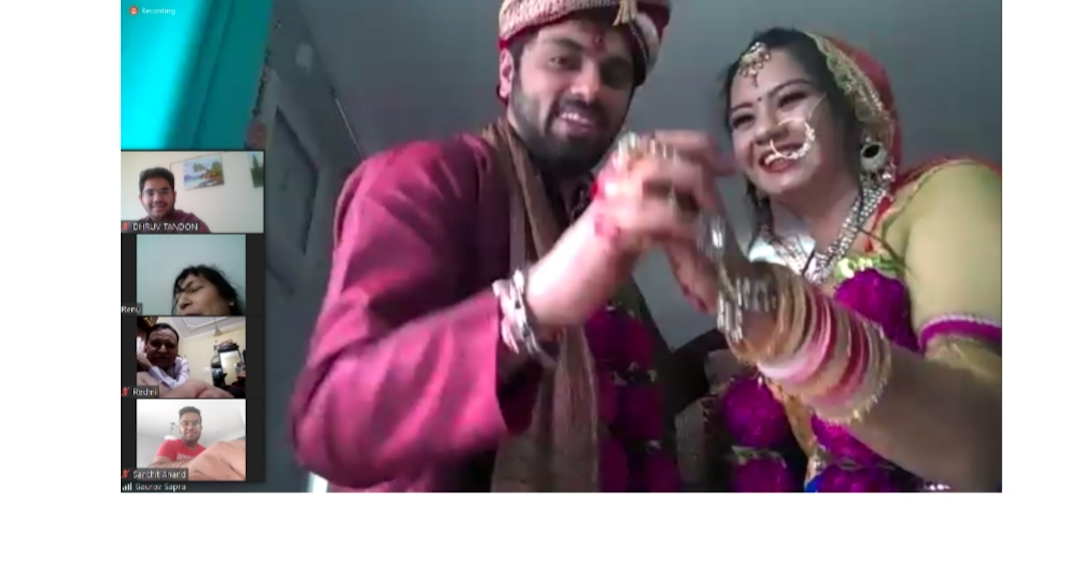