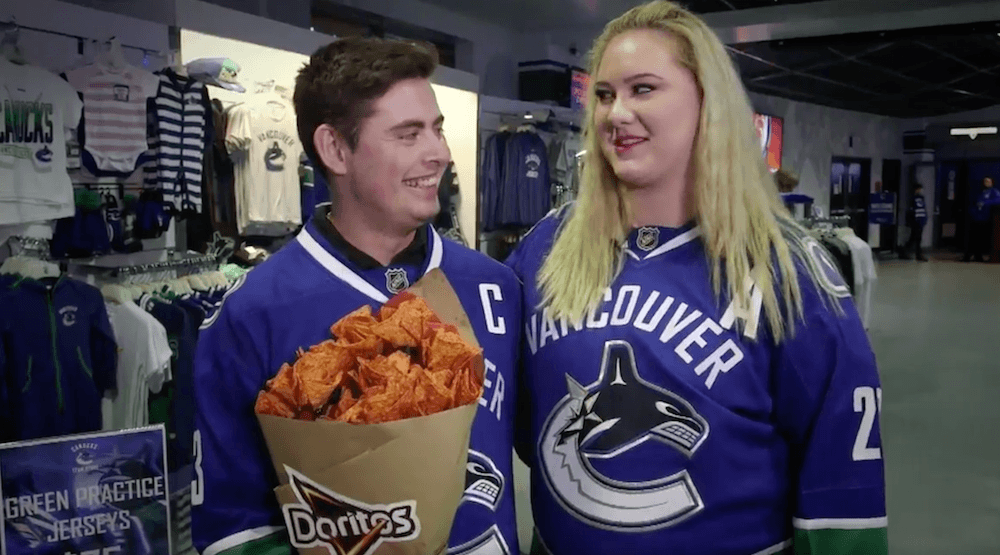 Brandon thought he was on his way to winning a mystery prize after being chosen to participate in the “puck shuffle.”

He got a prize, but not one he was expecting.

During a commercial break in the second period of Thursday night’s Canucks game, it was in-arena host Hannah Bernard who shuffled out of the way, while Brandon’s girlfriend Amanda shuffled into the scene.

“Brandon, will you marry me?” You couldn’t hear his response in the arena, as there wasn’t a microphone on him, so there was some confusion from some fans initially.

You could guess his response by his reaction, and a video released from the Canucks on Friday showed that not only did he say “yes,” he said it without hesitation.

A marriage proposal is nerve-wracking enough as it is (I’ve been there), I can only imagine the pressure on top of that by doing it in front of fans in an 18,000-seat stadium. Then on top of that, to buck tradition, by proposing as a woman? Pressure does not seem to faze Amanda.

Certainly, it shows a lot of confidence.

“A woman proposing to a man, you never know what to do, right? You can’t get them a big blingy ring. And you want it to be a bit different, anyways since you’re not following the traditional method of proposal,” Amanda said.

It’s 2017, and certainly women have every right to pop the question as their male counterparts. In fact, it’s even advantageous, due to the element of surprise.

Brandon, who first got to know Amanda as his manager at work, didn’t see it coming.

“No, I had no idea. I was very shocked and surprised. I’m still taking the time to catch my breath,” Brandon said in an interview with the Canucks moments after getting engaged. “Nothing but surprising.”

Going against tradition might not be for everyone, but Brandon appeared to be thrilled.

“He was a little bit more excited than I expected him to be, which is awesome,” Amanda said. “It’s great.”

“What’d you do last night?”

“Oh, you know, got engaged at the #Canucks game!” pic.twitter.com/3r0DzBxj1K