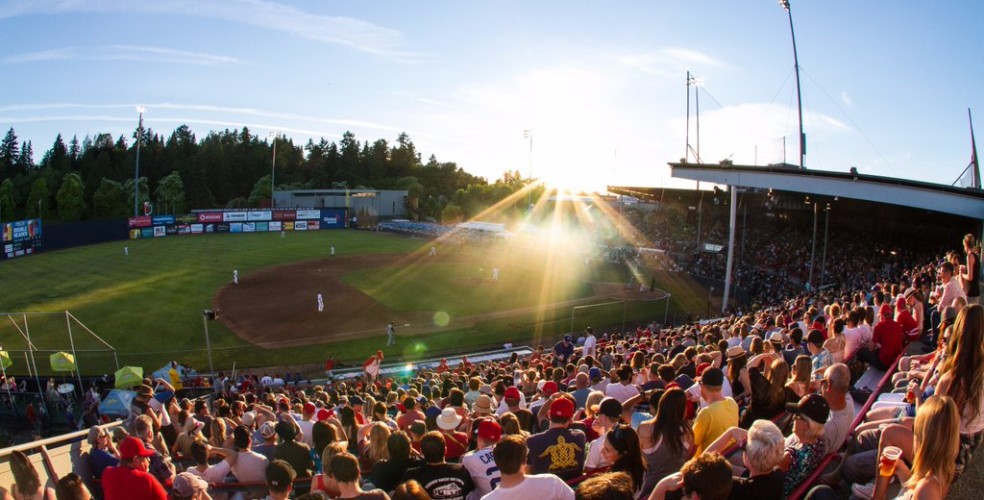 On the heels of Montreal successfully hosting two preseason Blue Jays games on the weekend, talk of baseball returning to la Belle Province is once again at the forefront.

Sold out Big O for a spring training game. Montreal is a baseball town. pic.twitter.com/OmwBYL6cNu

Bringing baseball back to Montreal – either through expansion or moving the Tampa Bay Rays – makes a lot of sense. I mean, if people in Montreal are willing to go to Olympic Stadium for preseason baseball, they must really want baseball back.

But what about Vancouver?

With the start of the regular season Sunday and the sun shining in Vancouver at this time of year, you have to think it would be a smash hit, at least at first.

Still, Manfred cautioned that the timeline for expansion is “not immediate.” He’s acknowledged that the process can’t begin until stadium issues are resolved in Oakland and Tampa Bay. For that reason, we’re five or six years — at the very earliest — from seeing the inauguration of new MLB franchises.

Baseball has not expanded since 1998, when Tampa Bay and Arizona were awarded franchises. The last time a team relocated was in 2005 when the Expos moved from Montreal to Washington.

Ironically, Montreal is now rumoured to be in hunt for a team while Tampa Bay may be the team most in danger of relocating.

Vancouver is very likely behind Montreal in the pecking order for a team, but after that you may be surprised.

This part made my ears perk up:

Former Blue Jays assistant general manager Bart Given — now managing director of TORQUE Strategies, a Vancouver-based strategic marketing agency — listed a number of reasons to believe in the city as an MLB market…

“When I first relocated here, I wasn’t confident Vancouver had a substantial enough density in population nor corporate headquarters to sustain 81 home dates of an MLB campaign,” Given said in an email. “This market is bigger than just the Vancouver Canucks . . . I’m gaining confidence Vancouver would embrace MLB beyond the traditional new franchise honeymoon phase.”

Vancouver is the second largest market in Canada and the United States without a Major League Baseball team, second only to Montreal.

With an urban population of approximately 2.3 million people, the Vancouver area ranks 25th in Canada and the United States in size. That puts Vancouver ahead of MLB cities like Cincinnati, Cleveland, Kansas City, and Milwaukee. Vancouver is only slightly smaller – less than half a million fewer – than St. Louis, Tampa Bay, Baltimore, Denver, and Pittsburgh.

When Vancouver was awarded an NBA basketball team in the mid-1990s, one significant disadvantage this city had was a lack of basketball culture.

That wouldn’t be the case if Vancouver got an MLB team. Vancouver has supported minor league baseball teams for the better part of a century, including the Vancouver Mounties and Vancouver Canadians.

A baseball culture already exists here. People have grown up with the game.

There was a noticeable buzz in the city when the Toronto Blue Jays were in the playoffs last season, even though a sizeable portion of Vancouverites are Seattle Mariners fans.

Of course, the challenge of convincing MLB executives that Vancouver is a viable Major League Baseball market is not without challenges.

BC Place is not an ideal baseball stadium, although it can be configured for it. The capacity of 54,500 would make it the second largest stadium in the league, and the small skylight means that most of the stadium is in the shade.

The old mushroom top roof is gone, so that’s a plus, as outfielders complained of losing streak of pop flies in the white roof.

BC Place would work initially, but long term I think Vancouver would need a baseball-specific stadium, along the lines of Safeco Field in Seattle.

The second challenge facing MLB in Vancouver is something that every city struggles with: filling a stadium for 81 regular season home games a year.

Major League Baseball has the longest schedule of any sport. Is there the money and passion to get around 30,000 people to games every day?

If a 40,000-seat baseball stadium is built, people would go crazy for it.

As long as the team isn’t Vancouver-Grizzlies-bad, they’ll get strong support. The fact that baseball season doesn’t compete with hockey season – something the Grizzlies had to do – is also in Vancouver’s favour.

Expansion to Vancouver and Montreal would make a lot of sense if commissioner Rob Manfred wants to move to four divisions within each league. The regional rivalries between Toronto/Montreal and Vancouver/Seattle would be great. They could move Tampa Bay to the National League, which would allow for a natural rivalry with Miami.

Here’s how the four divisions could look in the American League:

And four new divisions in the National League:

Baseball to Vancouver is far from a home run, but it’s worth considering.

If it’s ‘big league’, by and large, Vancouver will support it. But it would need to be done right.