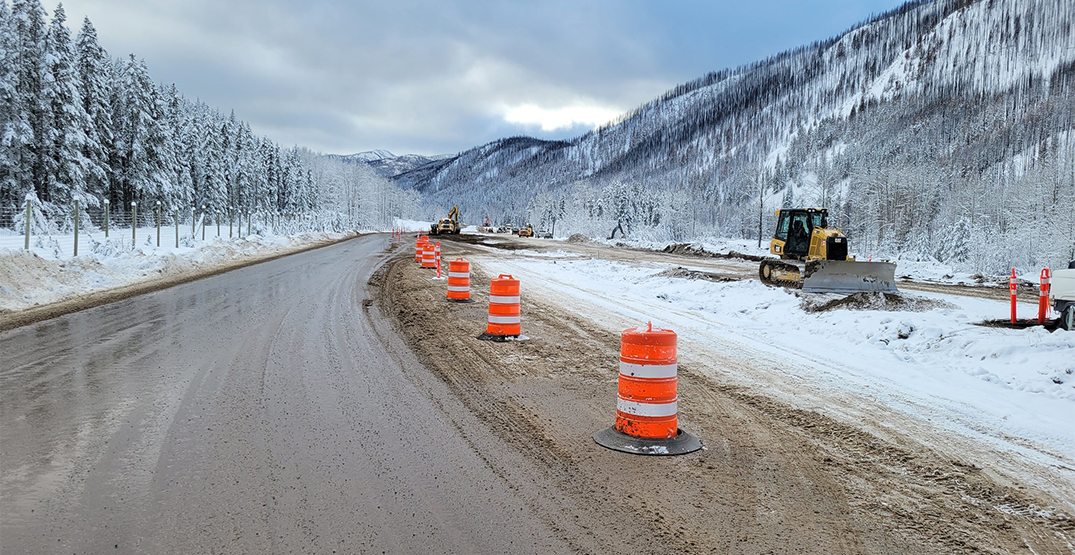 Paving work being done in the Murray Flats area of the Coquihalla Highway. (BC Ministry of Transport/Flickr)

The highway connecting the Lower Mainland and BC’s Interior has been closed ever since a devastating atmospheric river washed away huge chunks of the road in mid-November.

“The response by our maintenance contractors, subcontractors or engineers to get the Coquihalla Highway opened is as unprecedented as the storms that damaged it in the first place,” Fleming said. “They’ve been working around the clock in very challenging conditions.”

The highway won’t be the same as it was before the storm, though. There will be no electricity in many areas, leading to low lighting on mountain passes. Cellular service will also be reduced, and many washroom facilities remain closed.

Images of the destruction to the highway showed collapsed bridges and huge sections of highway broken off by mudslides. 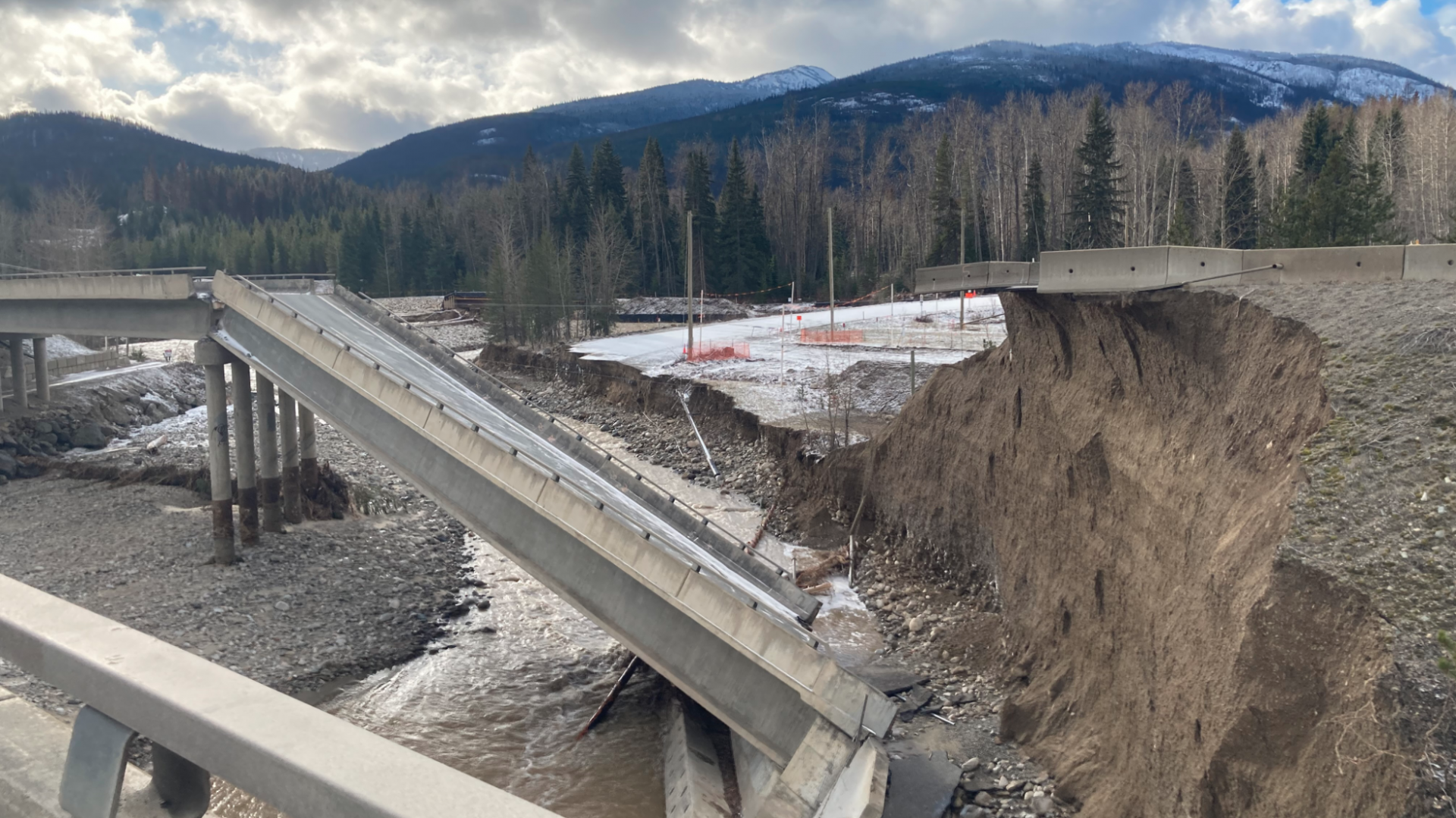 A severed portion of BC’s Coquihalla Hwy5 at Juliet is seen in a BC Transportation photo on Nov 17, 2021

Repairs are being done in two phases, with permanent fixed scheduled to take several more months. 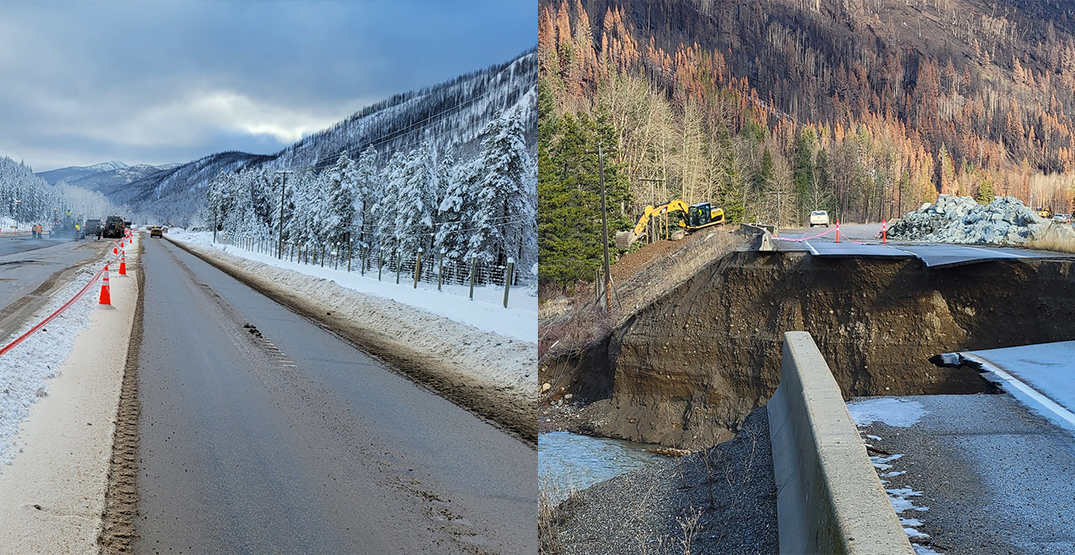 Before (right) and after (left) images of the Murray Flats area of the Coquihalla Highway. (BC Ministry of Transport/Flickr)

Who can drive on the Coquihalla?

The highway will be subject to an essential-only travel order when it reopens. Acceptable reasons to drive on the highway include:

Fleming said he wanted the Coquihalla to be the primary route for large trucks transporting goods, since it is faster than other routes.

Highway 3 and 99 to reopen to leisure travel

Once the Coquihalla opens for big rigs and other commercial transport trucks, the BC government will lift essential-only travel orders for Highway 3 and Highway 99.

Highway 3 will reopen to leisure vehicles approximately 24 hours after the Coquihalla reopens, which is a welcome update for people hoping to travel to see family over the holidays.

Fleming added a word of caution to drivers, saying Highway 3 is often difficult to navigate in winter conditions.

“People have to be paying attention to public health advice … and not travelling if not needed to,” he said.

Highway 99 is also estimated to reopen on the same day the Coquihalla reopens.

The Coquihalla is a key artery connecting the South Coast to the Interior, and many communities experienced supply shortages when they were cutoff from Metro Vancouver last month.

Right now Highway 3 is the only road route for commercial trucks between the Lower Mainland and the Interior.

Public Safety Minister Mike Farnworth said there is still no total monetary estimate for the cost of damage to BC’s highways during the storm.

However, federal Finance Minister Chrystia Freelance committed $5 billion to help BC recover from the devastating floods and landslides in November/

“While it will take time to recover, we will get there,” Farnworth said.