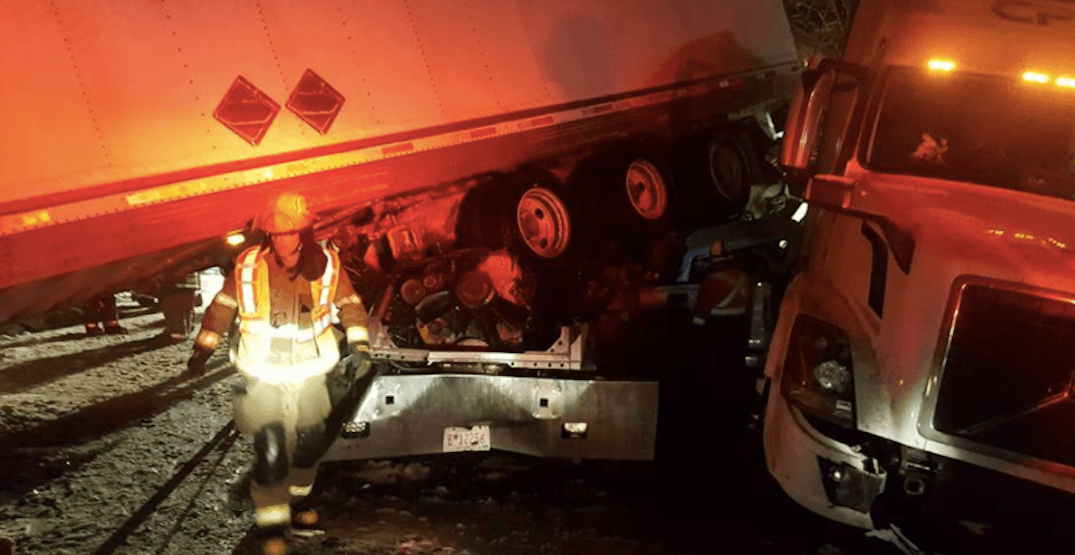 A serious crash on Sunday evening that involved cars, semi-trucks, and buses, resulted in an overnight shutdown of the Coquihalla Highway between Hope and Merritt.

CLOSED – #BCHwy5 in both directions between #HopeBC and #Merritt. Estimated time of opening is not available, alternate route via Hwy 1 or Hwy 3 and 5A

According to Hope Search and Rescue, three people in two different areas of the scene “had to be freed from the wreckage with auto extrication tools.”

While the crash left a total of seven people with serious injuries and nearly 30 people taken to hospital, there were no fatalities.

Final update on the #Coquihalla MVI: A total of 29 patients were transported to hospital by ground and air in conditions ranging from stable to critical. A total of 136 uninjured people were taken to a warming centre in Hope. We have now cleared the scene. #bcehs

“Multiple Emergency Services agencies responded to the collision and demonstrated excellent inter-agency cooperation in order to locate everyone involved and ensure that the injured received medical care,” said Halskov.

Winter driving conditions on the Coquihalla Highway are considered to be “a major contributing factor” in this collision, he added.

Investigation into the crash continues and police are once again reminding motorists to drive to the conditions, in vehicles that are properly prepared for winter roads.

“It is better to arrive at your destination late and safe than not at all,” he said.

The highway was re-opened in both directions on Monday morning.

OPEN – #BCHwy5 between #Merritt and #HopeBC. The road is now clear of the earlier vehicle incident.