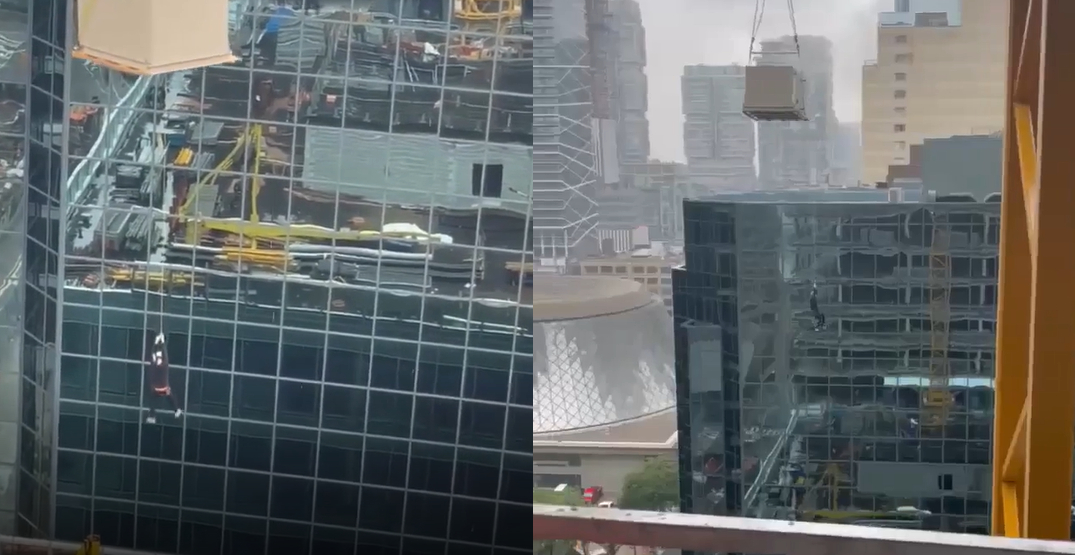 A video of an apparent construction worker holding on for dear life while dangling from a downtown crane has gone viral.

The video was posted on Instagram by a user named my_s1 on July 5 and has since been reshared by other Torontonians questioning if this incident was real or some sort of movie stunt.

As one user pointed out in a comment, the individual isn’t wearing safety boots like a regular construction worker would. They are seen wearing white sneakers and what appears to be a tool belt.

The people filming the incident can be heard shouting expletives in shock — “Oh my god, how the **** did this happen?” and “Holy ****ing Jesus Christ!”

Many comments on Indie88’s repost question if this was a stunt for a Tom Cruise movie or if the individual was perhaps just Arnold Schwarzenegger.

According to the user who shared the video on Reddit, the individual got their hand caught in the tag line and soared up to the 30th floor before the crane operator noticed. Apparently, they survived with “a few bruises on this thumb and a broken wrist.”

Toronto Police are aware of the video circulating the internet.

In an emailed statement, Caroline de Kloet, a media relations officer for the police, told Daily Hive they have not received any calls relating to this incident today or this past week.

“Toronto Fire also advised they did not receive a call for this either during the same time frame,” de Kloet says.