Conservative candidate and former mayor of Surrey Dianne Watts has been under scrutiny lately for a controversial flyer about “jihadist terrorists,” but she denies any fear mongering.

“There was no intention to fear monger,” reads a statement from Watts.

“Terrorism is a real and serious issue. The violence that has been inflicted on the families – the people and the children of Syria – Iraq cannot go unanswered.” 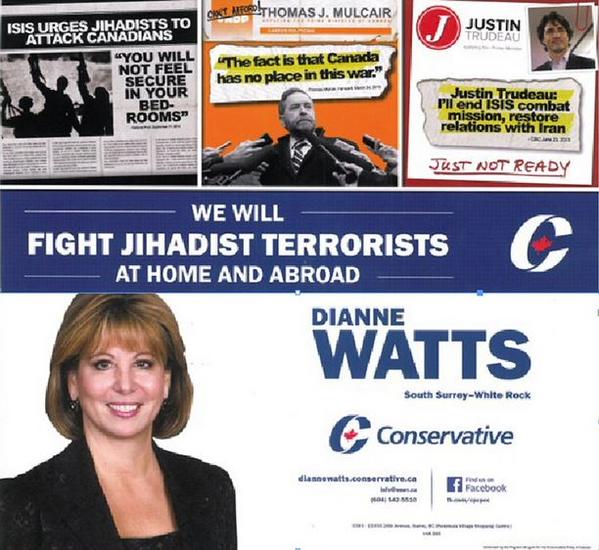 The flyer that was distributed in Watts’ riding of South Surrey-White Rock suggested people don’t feel secure in their bedrooms because of the threat of jihadists and ISIS and criticized both Thomas Mulcair’s and Justin Trudeau’s approaches to combating terrorism.

“Canada cannot sit on the sidelines and watch these atrocities continue. I decided to run for the Conservative party because they are the only party that has taken a stand against this type of violence and terrorism,” Watts continued in her statement.

The Conservative candidate has been receiving some heat – and has been the butt of some sarcasm – online for the flyer.

Remember, Dianne Watts and the HarperCons want you to look under the bed for Jihadists, tonight and every night. #cdnpoli #elxn42

@Garossino I thought there was an ISIS fighter in my bedroom but turned out it was just a cardigan draped over a chair #diannewatts #elxn42 — Lindsay Brown (@Lidsville) September 23, 2015

@DinoRancho @canadiancynic and then there is Dianne Watts in B.C. Check out her latest flyer. Fear mongering to New Cdns in worst way! — Cynthia Grenier (@Tintie4) September 22, 2015