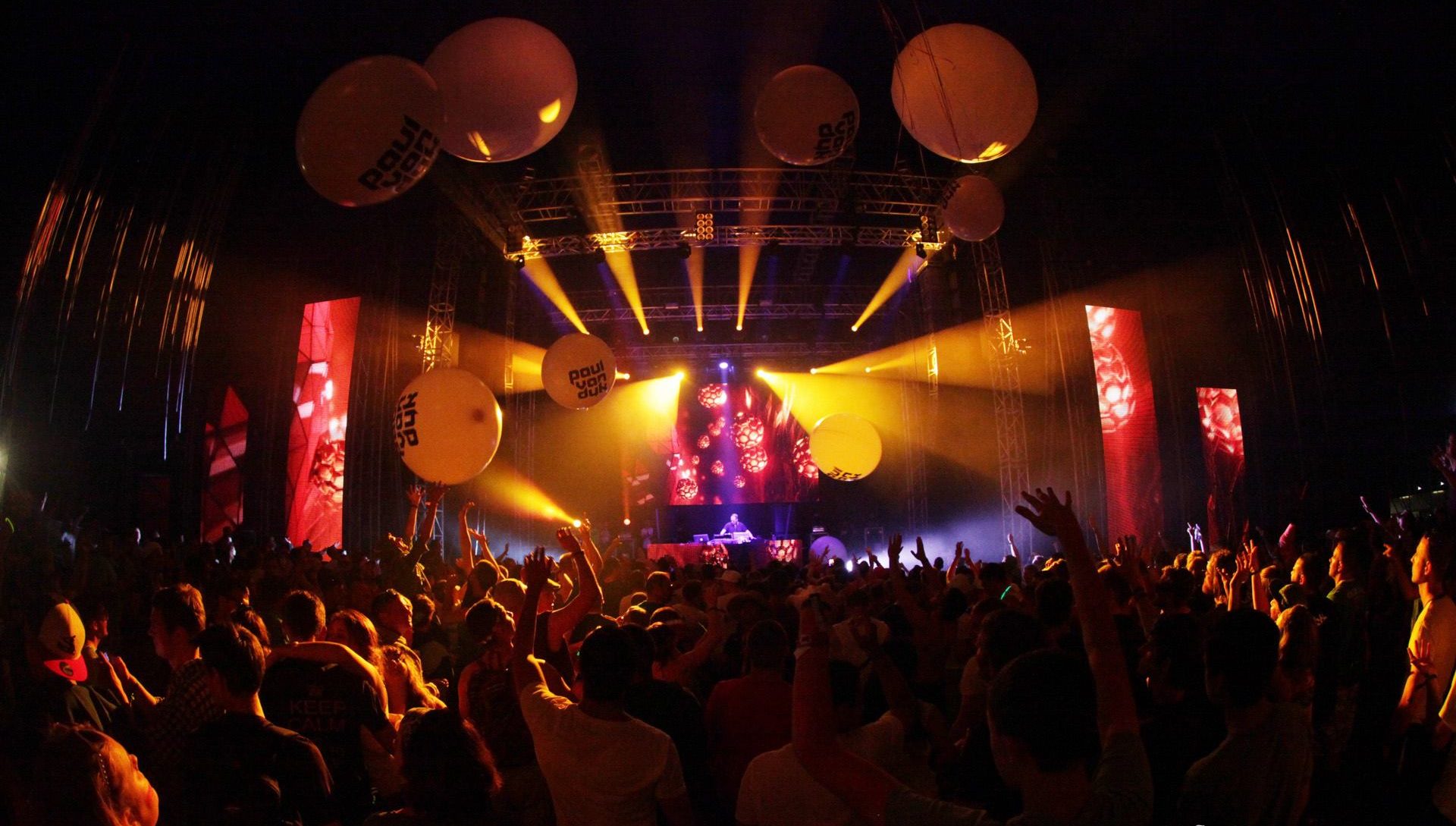 November is upon us, and as the rain falls and the days get shorter, things continue to heat up at Vancouver’s music venues.

From legends to newcomers, the city is getting a variety of artists this month, with something to please all music tastes. So grab your sweaters, umbrellas, and get ready for an awesome music month.

See you at the show, Vancouver.

Chilean-American electronic producer Nicolas Jaar recently released his second studio album, Sirens. The young experimental composer founded a subscription based label, Other People, but put it on hold recently in order to go on tour. And he’s clearly a fave, as many of his shows are already sold out!

Korean pop star CL will be on her first ever North American tour this winter stopping in Vancouver at the start of the month. The singer is on her “Hello Bitches Tour 2016” tour, and fans can get #Lifted with Korea’s “baddest female” as she makes history.

When: Tuesday, November 1 at 7 pm
Where: The Vogue Theatre – 918 Granville Street, Vancouver
Tickets: Available online at $99.50. All ages

Brooklyn-based musical group Wet return to Vancouver after their beautiful performance earlier this year at the Biltmore. The three piece released their 2014 album Don’t You, and it’s jam packed with emotionally-charged indie pop ballads. Give it a listen, and check out this month’s performance.

Hannah Georgas just released her third album For Evelyn, a lovely collection of tunes that was named after her grandmother, and first single “Don’t Go” is getting major airplay at Canadian Alternative radio. Georgas is a seasoned live performer, having opened for City and Colour and Sara Bareilles on past tours.

California punk rockers NOFX rose to fame two decades ago with the release of Punk in Drublic, which became a monster hit for the band despite them never having signed to a major record label. NOFX is one of the most successful independent bands of all time, with more than 8 million records sold and their latest, First Ditch Effort, is easily one of their best.

New York City rapper A$AP Ferg is bringing his Turnt & Burnt Tour to Vancity this month. Ferg has been making waves since his album Always Strive And Prosper earlier this year, which features the hit single “New Level.” And as his name implies, Ferg is a member of the hip hop collective A$AP Mob.

When: Saturday, November 5 at 7 pm
Where: The Vogue Theatre – 918 Granville Street, Vancouver
Tickets: Available online from $45 to $140. All ages

This American rapper and producer has four studio albums, including his 2016 release The Divine Feminine. The album includes his hit single “Dang!” featuring Anderson Paak, and produced by Vancouver’s own Pomo. He’s in town with “The Divine Feminine Tour” with Soulection feat. Andre Power.

When: Sunday, November 6 at 7 pm
Where: The Vogue Theatre – 918 Granville Street, Vancouver
Tickets: Sold out.

They’ve sold a combined 70 million albums and have won eight Grammys, and now Chicago and Earth, Wind & Fire are teaming up for a North American tour that stops in Vancouver on November 7. Both acts have charted countless hits and were each inducted into the Rock & Roll Hall of Fame.

Vancouver, you know you’d better watch out because Ms. Lauryn Hill will tear the roof off the Queen Elizabeth Theatre on November 8. The singer is as unpredictable as she is talented, so there’s no telling what she’ll have in store for her Vancity fans. Ms. Hill has sold tens of millions of albums worldwide and has taken home eight Grammy Awards, including one for Album of the Year.

When: Tuesday, November 8, at 8 pm
Where: Queen Elizabeth Theatre – 600 block Hamilton Street, Vancouver
Tickets: Available online from $57 to $127. All ages

English glam rockers The Struts had all the buzz before they even released their first album when they opened for the Rolling Stones. The Brit four-piece are on the road in North America again after they released their 2015 Have You Heard EP. Known for their lavish stage presence and magnetic appeal, this will be one show Struts fans don’t want to miss.

Lukas Graham have been huge in their native Denmark for years, racking up five number one singles in a row, but it was 2016’s 7 Years that made them international stars. Be sure to catch these guys at the relatively tiny Vogue Theatre as they’re sure to graduate to bigger venues in no time.

After releasing two successful EPs, Ontario’s Coleman Hell is on the road promoting his debut album Summerland and will perform a highly-anticipated show at Venue on November 10. “Fireproof”, the album’s first single, has already sold more than 40,000 copies and was certified Gold by the Canadian Recording Industry Association.

Toronto’s Keys N Krates formed as the brainchild of drummer Adam Tune, synth/keyboard aficionado David Matisse and internationally award-winning turntablist Jr. Flo. After coming together in 2008, the trio blended hip hop and bass music to create their own sound – one that has taken them all over the world to a slew of sold-out shows.

Vancouver’s Rykka is releasing her new LP Beatitudes on November 4. The album features the hit single “Bad Boy” which has been streamed over 55,000 times on Spotify. Rykka is charged to hit the road in support of Beatitudes on a tour across Canada – including this month’s homecoming stop.

UK singer/songwriter Holly Lapsley Fletcher brings her haunting voice back to Vancouver this month. Following the successful release of her debut album Long Way Home, Lapsley has been on tour and the world has been singing along to her mega single “Station.”

Toronto-based band The Trews were on the road earlier this year with an Acoustic Tour, and made an appearance in Burnaby this summer during Canada Day celebrations. The boys return for a show at the Commodore, with Bleeker.

Toronto’s Tory Lanez is back, bringing his crowdwalking skills to two shows in two venues. Lanez is known for his crowdsurfing, beats, and rap style and is one of Toronto’s biggest music exports these days. His debut album, I Told You, was released on August 19 and his massive four-month tour started shortly after. Clearly Vancouver loves him, both shows are sold out.

Melodic producer Jai Wolf is in Vancouver as part of his “Kindred Spirits North American Tour.” No stranger to Billboard’s Hot Dance/Electronic Songs charts, Wolf got his early recognition through his remixes – such as Skrillex’s “Ease My Mind.” Impressed with the remix, Skrillex got Wolf a partnership with the OWSLA label.

Canadian electronic stars A Tribe Called Red are heading to the Commodore Ballroom for a pair of shows on November 18 and 21. The band has been on a steady rise since winning the 2014 Juno Award for Breakthrough Group of the Year and their latest album We Are the Halluci Nation is a hit with critics and fans.

Juno Award-winners Wintersleep didn’t even have an active record deal when they began recording The Great Detachment, their sixth studio album that came out in March. But once the album was completed, the band was scooped up by major label Dine Alone Records (home to Tokyo Police Club) and announced a Canadian tour that includes a stop at Vancouver’s Commodore Ballroom.

Compton rapper YG is on his “Fuck Donald Trump Tour,” which follows the release of his sophomore LP Still Brazy. The 26 year old had his first major debut in 2009 when he worked with Ty Dolla Sign on “Toot It and Boot It.” He’s since signed with Def Jam Recordings and released several mixtapes. Still Brazy was released earlier this summer with his single “Why You Always Hatin?” premiering on OVO Radio.

Norwegian dance-pop artist Mr. Little Jeans first broke into the music scene with her banging cover of Arcade Fire’s The Suburbs (aka one of the best covers you’ll ever hear). But when her album Pocketknife was released, she proved to be more than a one hit wonder.

Danish producer/singer MØ has only released one studio album, in 2014, but she’s been collaborating and on tour for the past two years. Her electro-pop artist collaborations include Major Lazer for “Lean On,” Elliphant for “One More,” and “Beg for it” with Iggy Azalea.

Canadian electronic indie band Dragonette return to Vancouver for a concert on November 23 at the Imperial. Famous for their hit “Hello” with DJ Martin Solveig, Dragonette recently released their new single “Lonely Heart.” Their catchy pop sound has been consistent throughout their albums, since their 2007 release Galore. And with their upbeat tracks comes an energetic show that is bound to electrify the Imperial.

When: Thursday, November 24 at 7 pm
Where: Imperial – 319 Main Street, Vancouver
Tickets: Sold out online. Limited tickets may be available for purchase at the door just prior to the event. Cash sales only. 19+

British folk rockers Daughter are heading to the Queen Elizabeth Theatre to promote Not To Disappear, their second studio album. Fans can expect loads of new material in addition to classic tracks from the band’s four EPs.

Legendary German trance producer Paul Van Dyk returns to make you dance on a cold winter night. The Grammy Award-winning DJ got his start back in the 90s and has survived the endless evolution of electronic music, through seven studio albums and many hit singles and remixes.