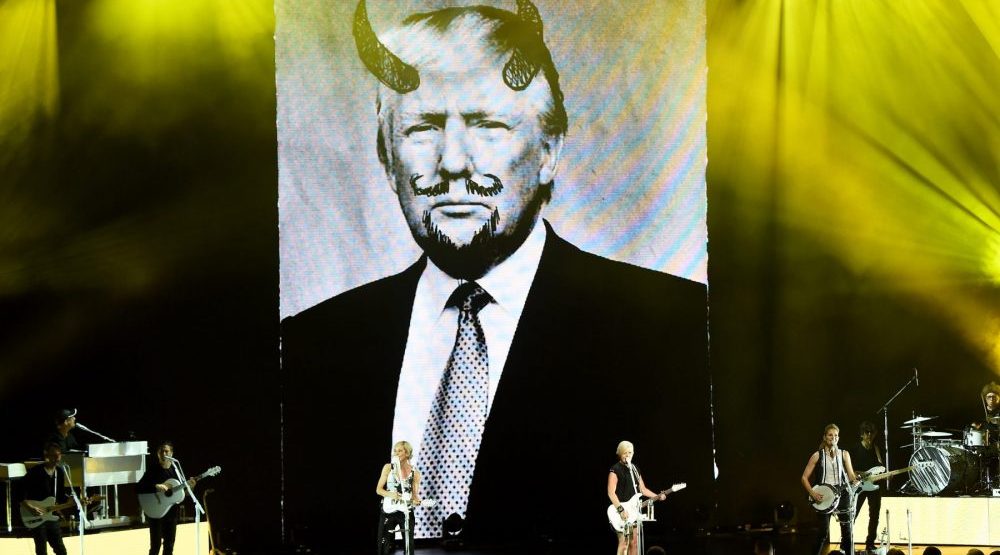 Country music badasses The Dixie Chicks played a rocking, rollicking show in Vancouver last night and made it very clear that they’re not ready to make nice just yet.

Let’s get the political stuff out of the way first before we get into the spectacular music. The Chicks, comprised of singer Natalie Maines, guitarist Emily Robison, and violinist Martie Maguire, didn’t call anybody out by name on Thursday but instead let the giant video screens behind them do the talking. Various presidential candidates were portrayed as bumbling cartoons during “Ready To Run”, while a defaced photo of former reality-show host Donald Trump appeared onscreen during “Goodbye Earl” (complete with devilish horns and an evil goatee). Brave? Try balls-y. 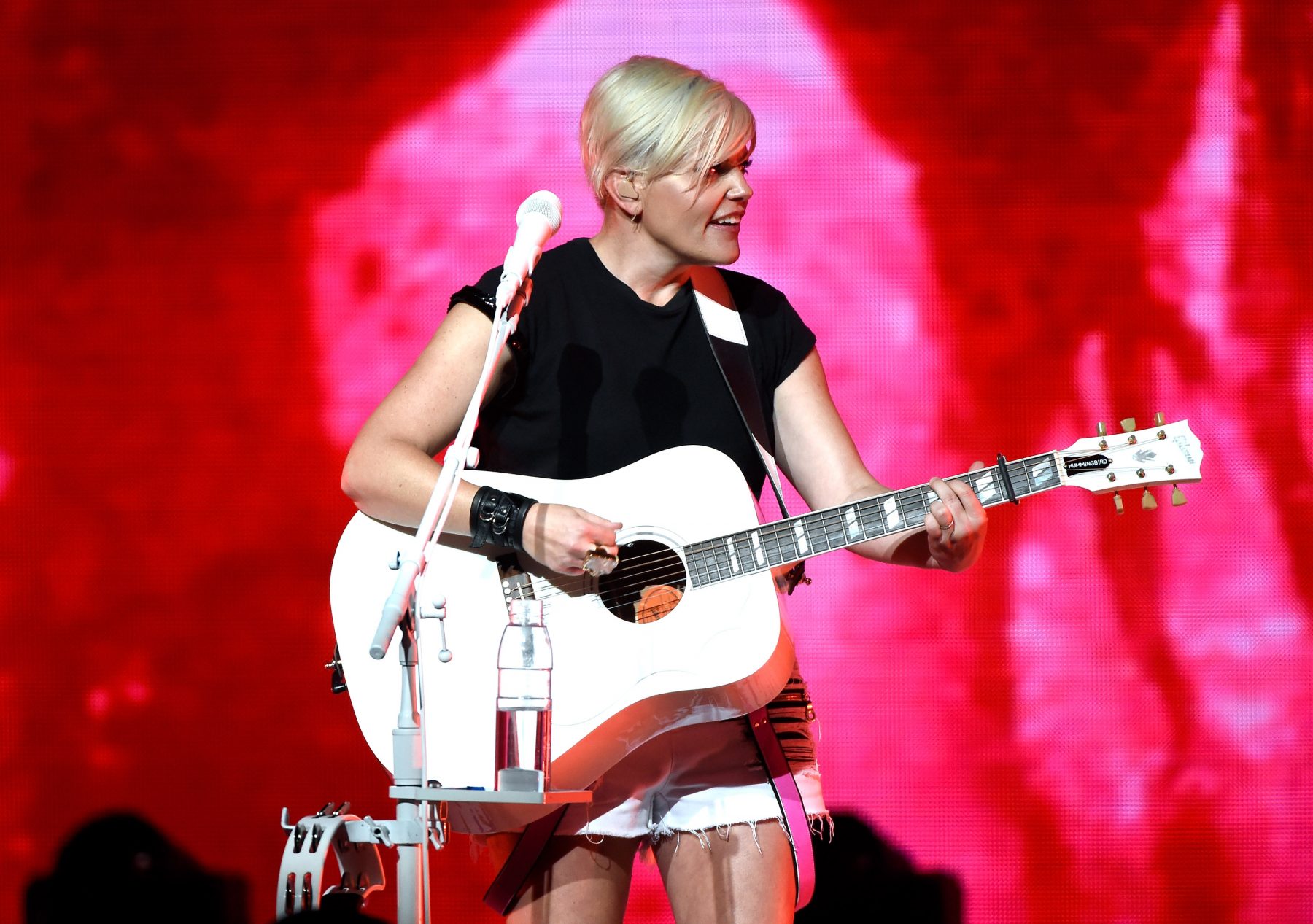 But the Chicks have never been content to just “shut up and sing.” The events of 2003 seem like forever ago, but it simply wouldn’t be a Dixie Chicks review without a mention of that one sentence that changed country music and pop culture irrevocably. America was just about to head into Iraq, and Maines, on behalf of the group, told fans at a London concert that “we do not want this war, this violence, and we’re ashamed that the President of the United States is from Texas.”

The response was fast and furious – radio stations literally went radio-silent on the trio and refused to play their songs. Their “fans” quickly jumped on the bandwagon, and the controversy plagued their career for years. But the Chicks refused to back down and their response, 2006’s deliciously defiant Taking The Long Way, took home five Grammys including one for Album of the Year.

The ladies tried the side-project thing for a bit and sporadically played a handful of shows as a group (including one in Vancouver in 2013), but the Dixie Chicks haven’t released an album of new material in a decade. They are sorely missed, but on the bright side, fans weren’t stuck humming to a bunch of unfamiliar songs last night. Instead, the setlist was comprised of two hours of classic hits and covers of songs by Bob Dylan, Patty Griffin, and Prince. 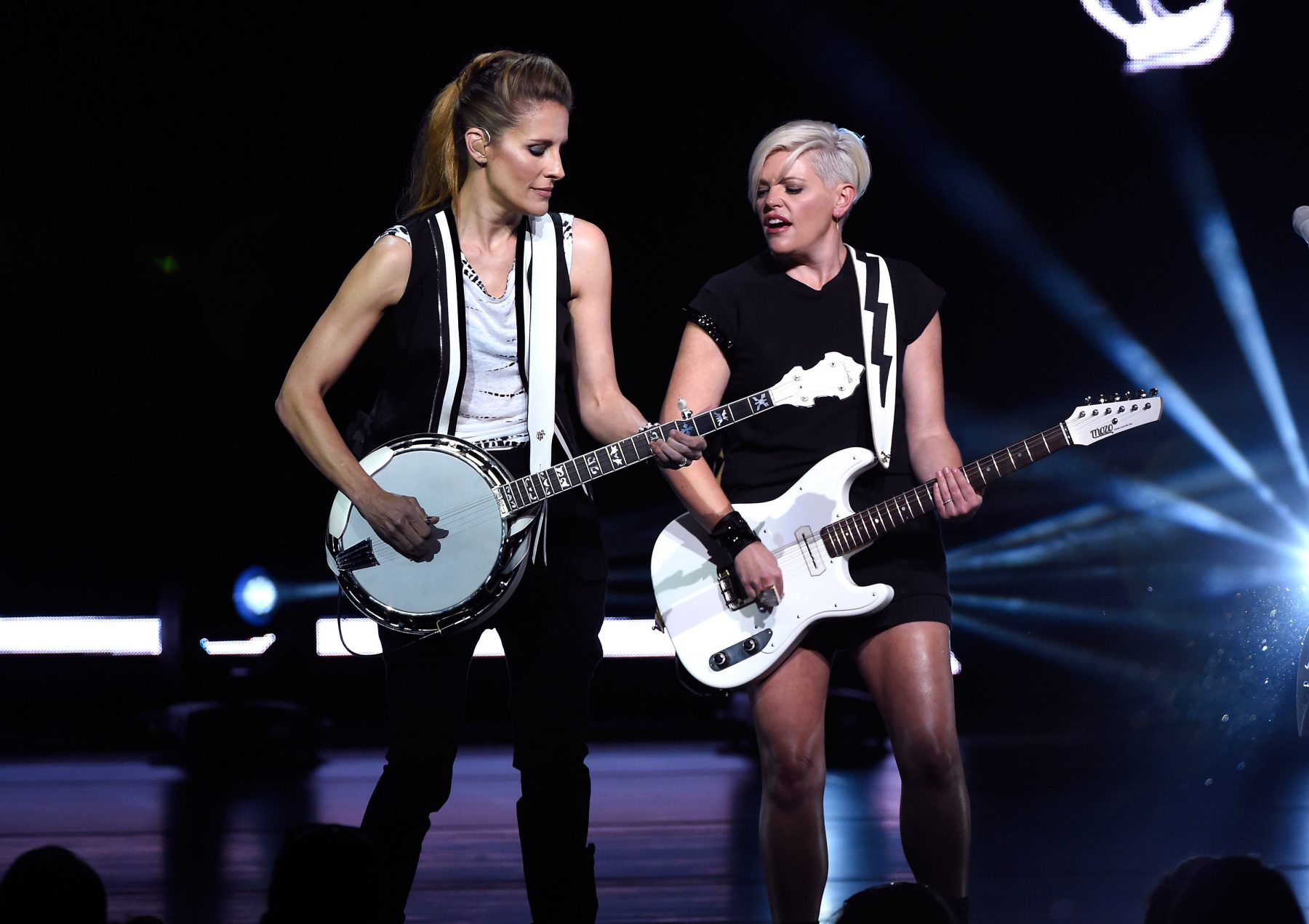 “We lost a huge musical influence to everyone up here on this stage,” Maines said before beginning a country-fried version of “Nothing Compares 2 U.” It was the second Prince song of the night; the ladies took the stage at 8:40pm to the tune of “Let’s Go Crazy.”

And crazy we went.

The Chicks turned Rogers Arena into an good ol’ fashioned hoe-down from the first notes of “The Long Way Around” and kept the crowd (many of them in cowboy hats and boots) on their feet for close to two hours. The first half of the evening included hits like “Easy Silence” and “Truth No. 2,” which had Maines hilariously singing the line “You don’t like the sound of the truth/coming from my mouth.”

She’s completely wrong, of course – the near sell-out crowd hung on every truthful word uttered by the singer. Whether she was singing the hell out of songs like “Sin Wagon” or simply apologizing for leaving the stage to fix her lipstick before “Not Ready To Make Nice,” it was an absolute pleasure to be in Maines’ presence for the evening.

Not only is the Chicks’ DCX MMXVI World Tour their first in North America in ten years, it’s also their first to feature a wardrobe change. The show was divided into two sets last night, and after a quick intermission, the trio returned to the stage looking just a little different than they had moments ago. 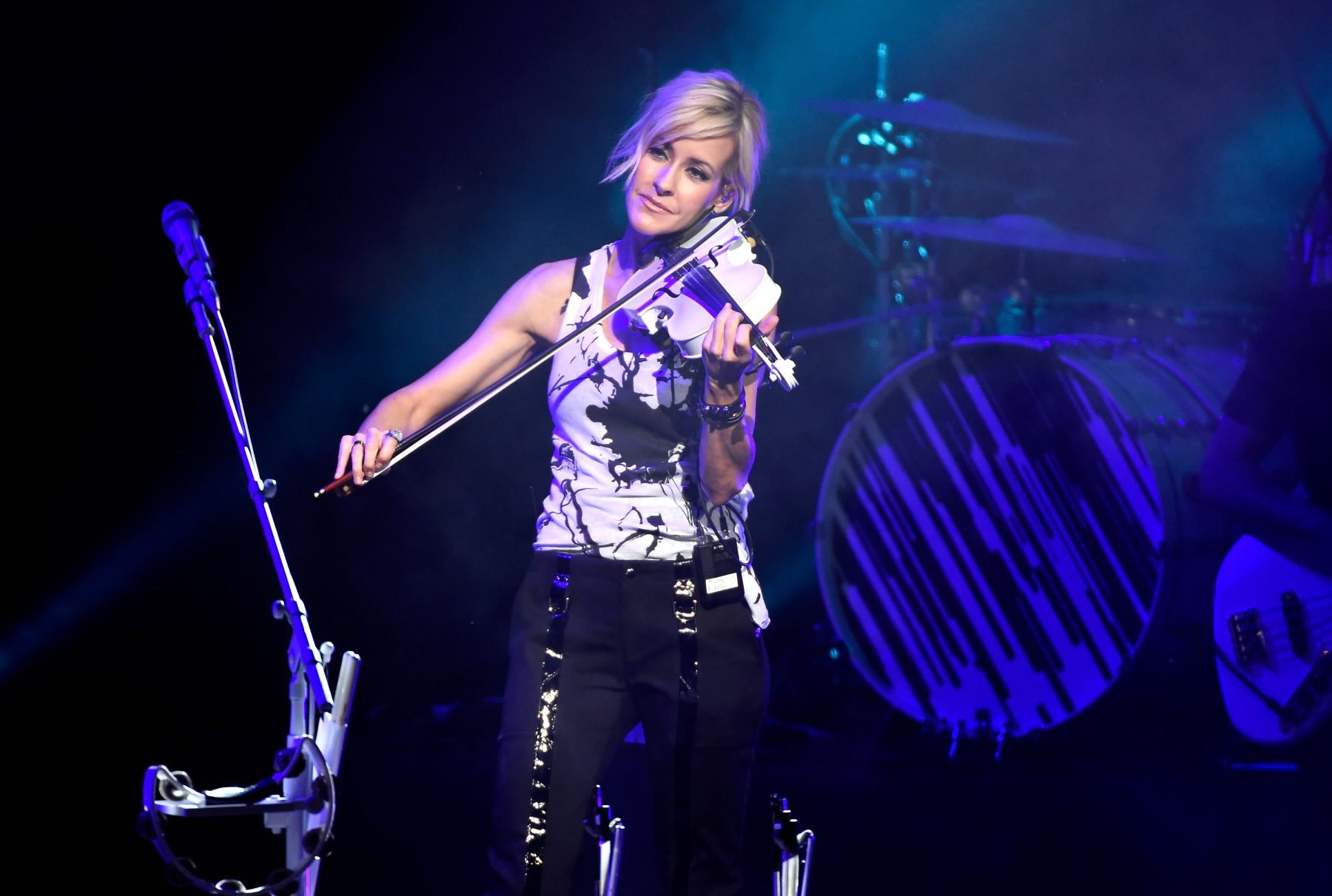 “I hope everyone notices these costume changes,” Maines said before “Traveling Soldier.” “Before we were all in black and white, and now we’re in white and black.” It says a lot about the women as musicians that they’re more comfortable changing instruments repeatedly than they are changing clothes.

Another first for a Dixie Chicks tour: a Beyonce cover! As part of a running joke on the road, the ladies brought out a cardboard cutout of a man named “Flat Ronnie” (Howard Stern fans will be familiar with the gag) and told us that Flat Ronnie is “obsessed” with Beyonce’s new album Lemonade. As a “favour” to the cutout, the ladies performed a twangy version of Bey’s “Daddy Issues” that actually kind of worked.

Fun fact: the Dixie Chicks are the best-selling female group of the last quarter century, with Destiny’s Child coming in a distant second.

Other covers last night included Bob Dylan’s “Mississippi” and their very famous version of Fleetwood Mac’s “Landslide.” “It was 15 years ago when we decided to record this next song,” Maines said before “Landslide.” “Hard to believe that 15 years ago I was only 20 years old,” she said, obviously forgetting that her age is on her Wikipedia page.

“I think I was the only one with a child at that point,” she continued. “And I felt really connected to the lyric I’m getting older too. Little did I know…” she said to big laughs. 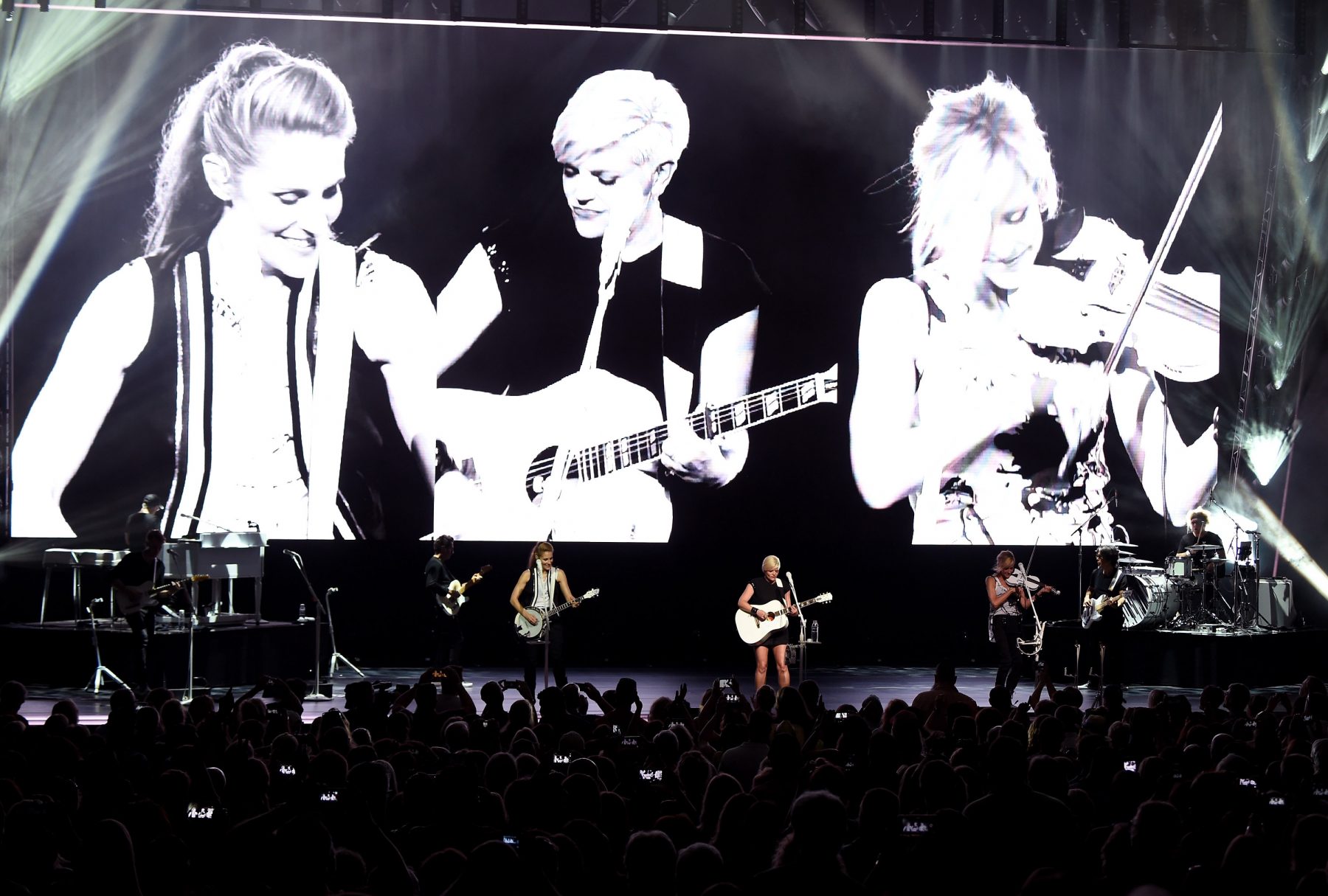 The Chicks finished with a pair of ballads (“Cowboy Take Me Away” and “Wide Open Spaces”), followed by a fiery version of  “Not Ready To Make Nice” that had the entire arena chiming in on background vocals. But Maines insisted on sending the amped-up crowd home on a lighter note.

“We can’t leave you all angry and not ready to make nice,” she said before closing with a cover of Ben Harper’s “Better Way.” “There’s too much hatred and anger out there in this world today, so we gotta knock that shit out of here.” And just as she said that, the night’s most powerful image, a rainbow-coloured heart, appeared on a giant screen behind her.

“There’s a lot of crazy nut jobs out there doing really bad stuff in the world right now, so we’d like to sing this song at the top of our lungs. And I believe that we can change the energy in the universe towards positivity.” And as Maines tenderly sang the lyric “I believe in a better way”, that change towards positivity almost felt possible.