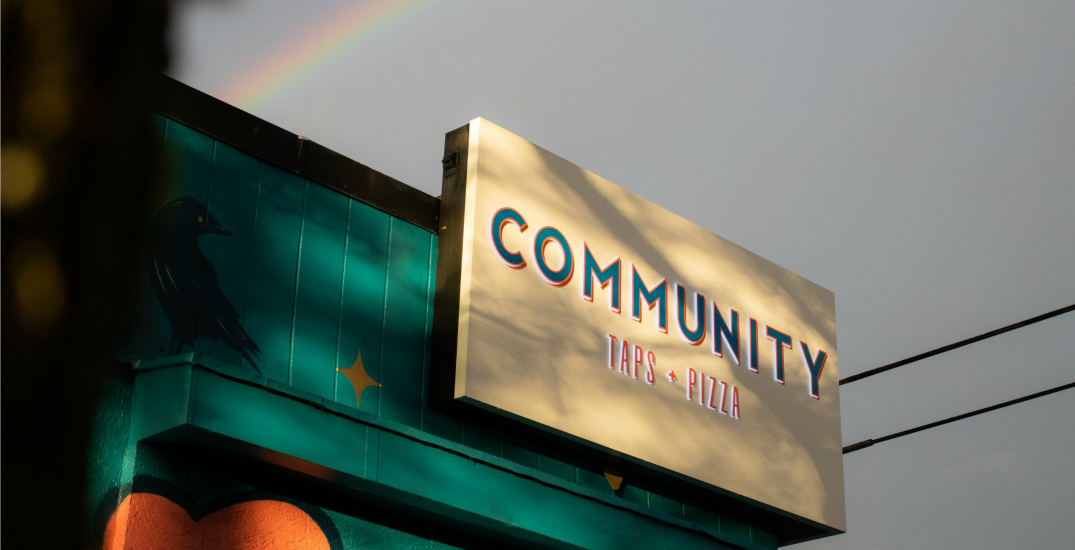 Brimming with culture, energy, and an unmistakable community charm, Commercial Drive is easily one of the coolest neighbourhoods in the world.

One of the aspects that puts this vibrant East Vancouver hub on the map is its diverse restaurant scene. Community Taps and Pizza, the area’s newest dining establishment located at 1191 Commercial Drive, focuses on celebrating the community in a beautiful way.

The restaurant officially opens on Thursday, November 25, but we had the opportunity to get a sneak peek at the space and some of the exceptional items on the menu ahead of time. Before we go into the delicious details, please know that this might quickly become your new go-to spot. 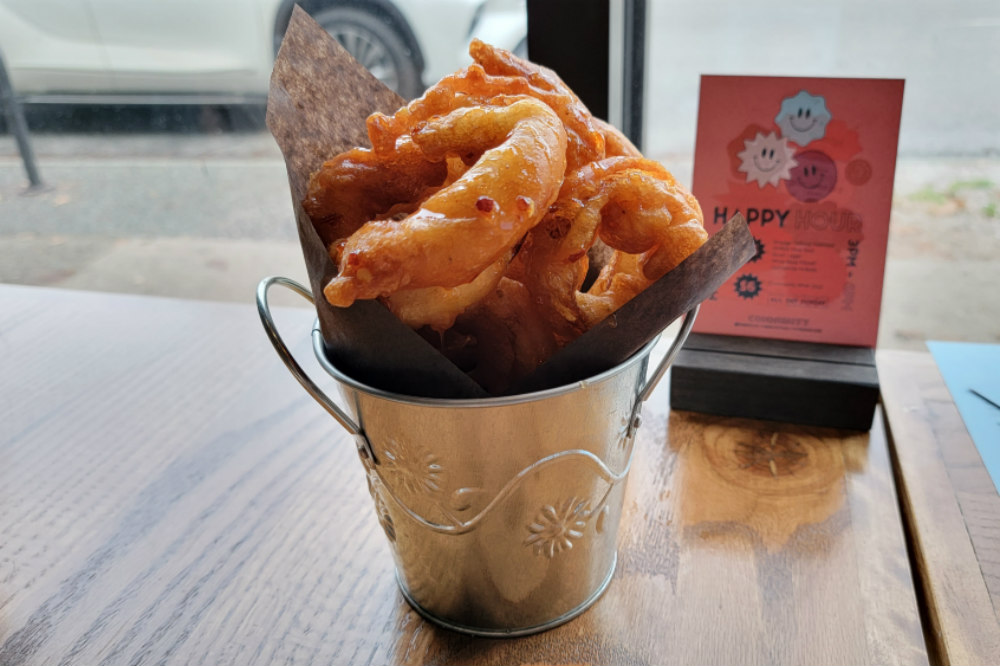 Upon walking into Community Taps and Pizza, you’re greeted by friendly, welcoming staff, and once seated at your table, they’re genuinely happy to share their recommendations with you.

The menu, which has been brought to life by Chef Steven Ewing, features a mix of traditional and global pizzas, inspired not only by Vancouver’s pizza community but the pizza styles of New York and Detroit, too — while featuring locally sourced ingredients.

To get started, we went with our server’s recommendations of trying two menu items: the Community Meatballs and the Onion Rings. Perfectly crisp on the outside with beer batter yet almost fluffy on the inside, the onion rings were an instant hit.

My boyfriend and I quickly concurred that these were the best onion rings we had in a very long time, in part because they’re drizzled with a hot honey sauce and taste almost like savoury doughnuts. How often (if ever) do you see that? 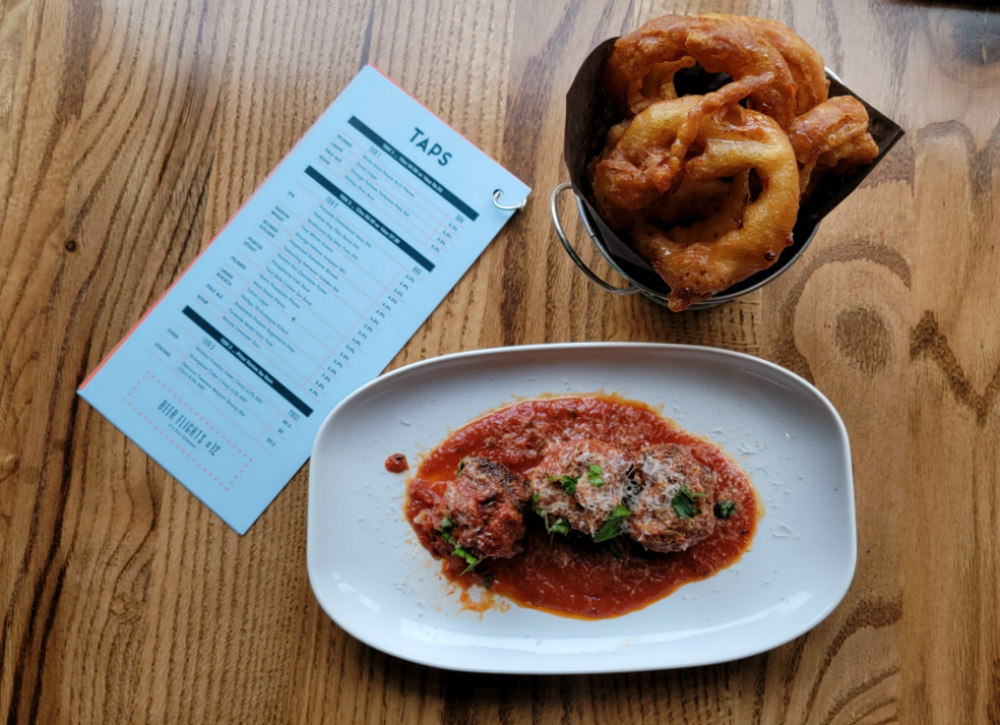 The meatballs did not disappoint either. Herb-forward with the restaurant’s own in-house herb blend, parsley, ricotta, pecorino, and covered in Sunday sauce with grana padano on top, the great-tasting flavours reflected the Italian culture of the area.

We also found out that the veggie option, Impossible Meatballs, is just as tasty; this appetizer is already on our list for when we visit the restaurant again in the future. 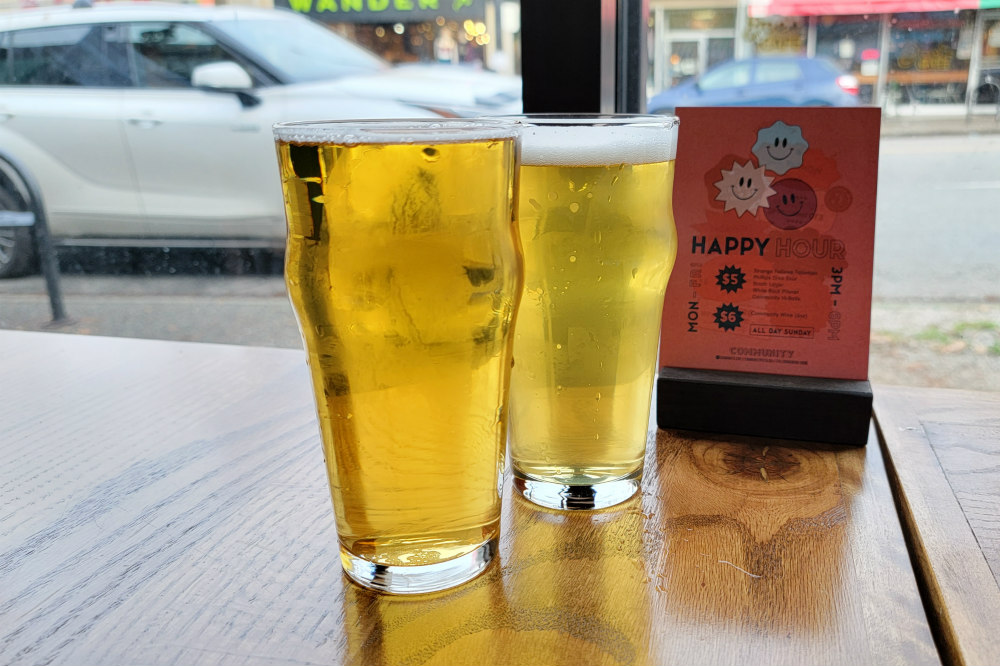 Community Taps and Pizza has an impressive, carefully curated beverage menu with over 40 beer taps featuring a selection of local and seasonal brews.

I decided to try the Strath Lager by Strathcona Beer Company, which proved to be light, crisp, and super sippable. My boyfriend tried the Peace Arch Pilsner by White Rock Beach Beer Company and commented on how fragrant it was — “clean without the hops.”

But you won’t only find beer options at Community Taps and Pizza. The restaurant has a wine program with eight wines on tap and options from local BC wineries. It also has a Community Beer & Wine to-go fridge — a handy solution if you’re ordering for takeout.

I couldn’t help but notice a flyer in the restaurant that highlighted the fact that there are deals on offer every single day at Community Taps and Pizza, with something to suit cocktail enthusiasts, beer aficionados, and wine lovers. 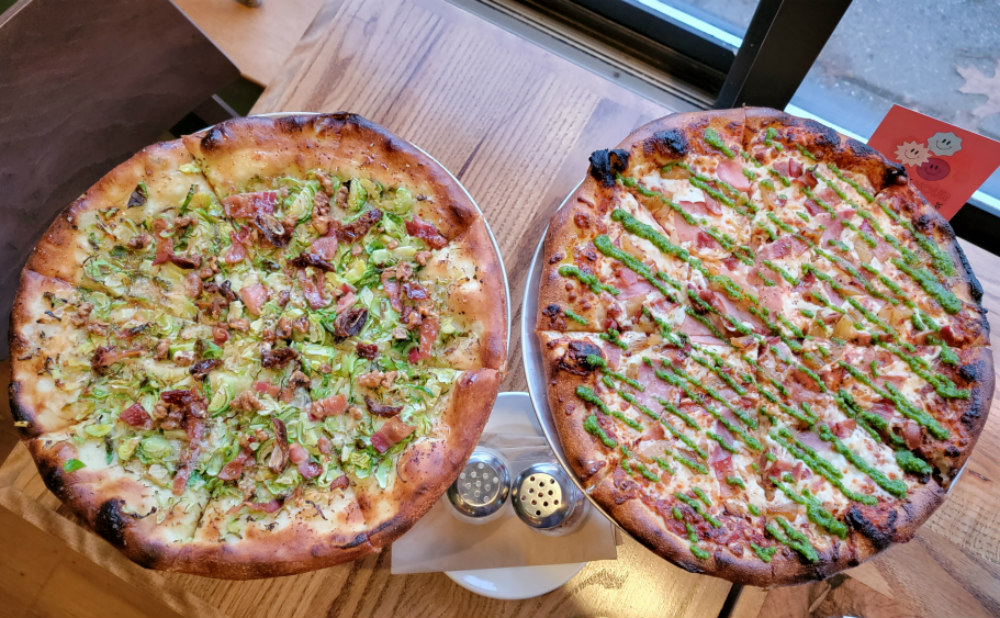 As true pizza fanatics, we ordered two wildly different styles of 14-inch pie: Brussels and Bacon and the Hawaiian Extreme. Well, even now, it’s difficult to choose a favourite because they were both phenomenal.

The Brussels and Bacon pizza seamlessly joins brussels sprouts, bacon, dates, and walnuts with gorgonzola cheese and hot honey. Again, hot honey claimed its place as the addition I never knew I needed until that first bite.

An explosion of flavours in the best way, the Hawaiian Extreme features smoked ham, crispy bacon, chilli pineapple, rossa sauce, and mozzarella, with a housemade jalapeño drizzle that’s flawlessly hot but not too spicy.

It would be remiss not to mention the role the dough plays in the overall pizza experience. Before it’s baked in a pizza oven (which was imported from Europe), the dough is fermented for 72 hours. 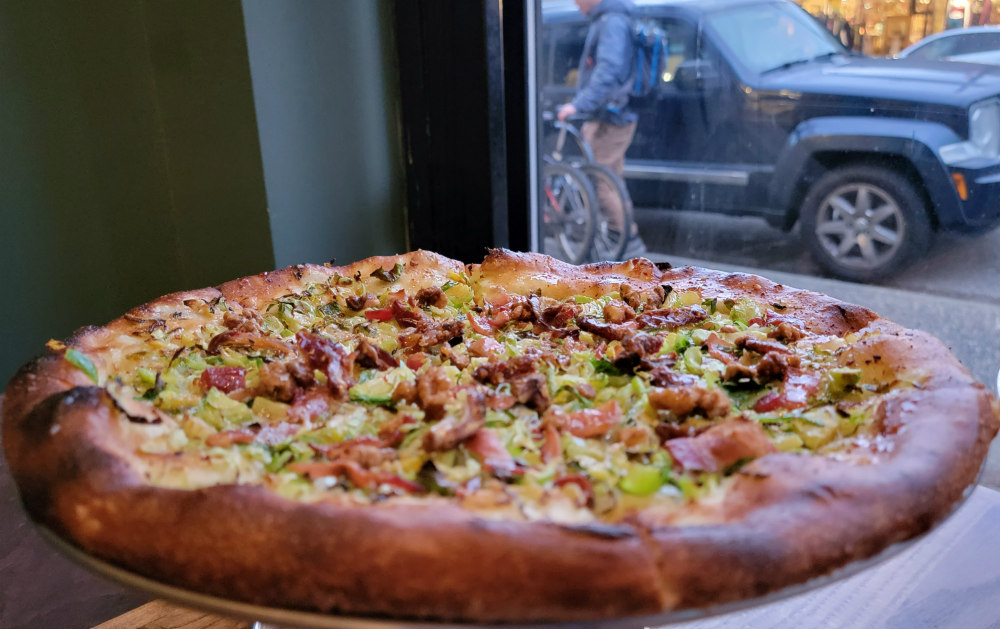 Two more brews worth trying on the extensive menu at Community Taps and Pizza? Sports! — a pilsner by Electric Bicycle Brewing that offers dried fruit notes, and Tofino Lager by Tofino Brewing Company — a clean lager with a welcome hint of apple.

When you visit this new Commercial Drive foodie haven, don’t forget to order dessert. The Chocolate Skillet Cookie is ideal for sharing and treats you to the crunchy texture of mini chocolate discs against soft cookie dough. It also comes with a sweet scoop of salted caramel gelato on top from the local ice cream shop Dolce Amore. 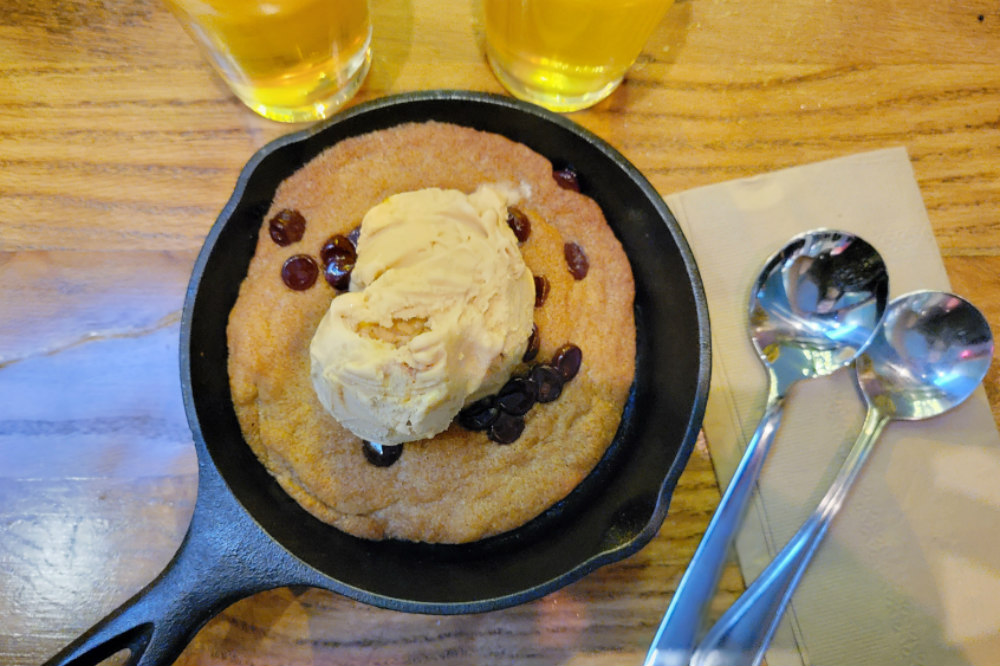 Aside from a menu loaded with tempting, drool-worthy eats, Community Taps and Pizza has a comfortable, cozy vibe. Make a reservation for a seat by the window and catch the action on the street as the evening falls.

No matter where you sit, you can admire the captivating mural adorning the back wall of the restaurant. Hand-painted by local painter Jason McCrea, it pays homage to the culture of East Vancouver. Step outside the restaurant and you’ll see another stunning mural by Chairman Ting. 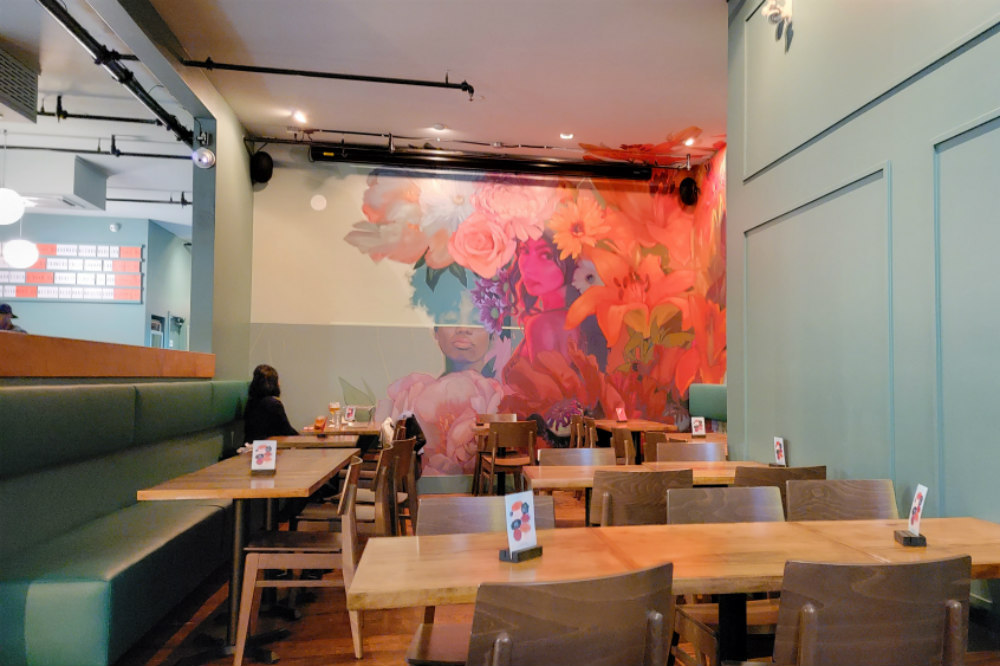 From November 25, Community Taps and Pizza will be open daily for brunch, lunch, and dinner service. To learn more before you visit, head to communitypizza.ca.