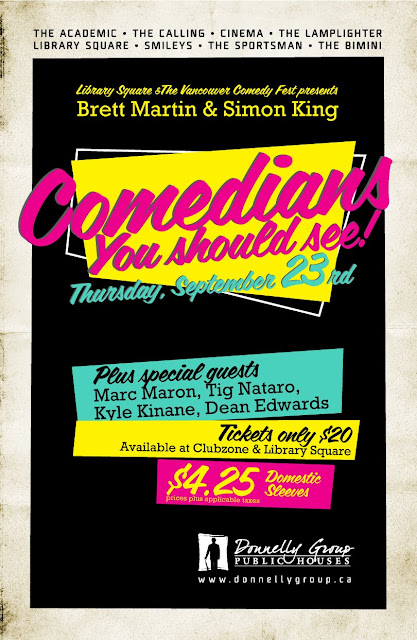 ‘Comedians You Should See’, the show that explains itself, is back. But if you would like specifics, it’s a showcase of extremely talented and ridiculously funny Stand up Comics from Vancouver, Canada and beyond.
Make sure to catch the Vancouver ComedyFest edition, featuring the hilarious Marc Maron, Ryan Hamilton, Kelly Dixon, Tig Nataro, and Winston Spear, in an intimate venue where you’re right on top of the action – it’s going to be an energetic night of high octane Comedy. If this isn’t enough for you, you’re somewhat unreasonable.
Live from Library Square Public House and hosted by Simon King and Brett Martin – Vancouverites who are among Canada’s top club headlining comics with credits that include CTV, The Comedy Network, XM Satellite Radio more – the show will be a raucous night of Stand up Comedy like you haven’t seen before.

Tickets are $20 and are available on Clubzone and at Library Square. Showtime is 10:00.