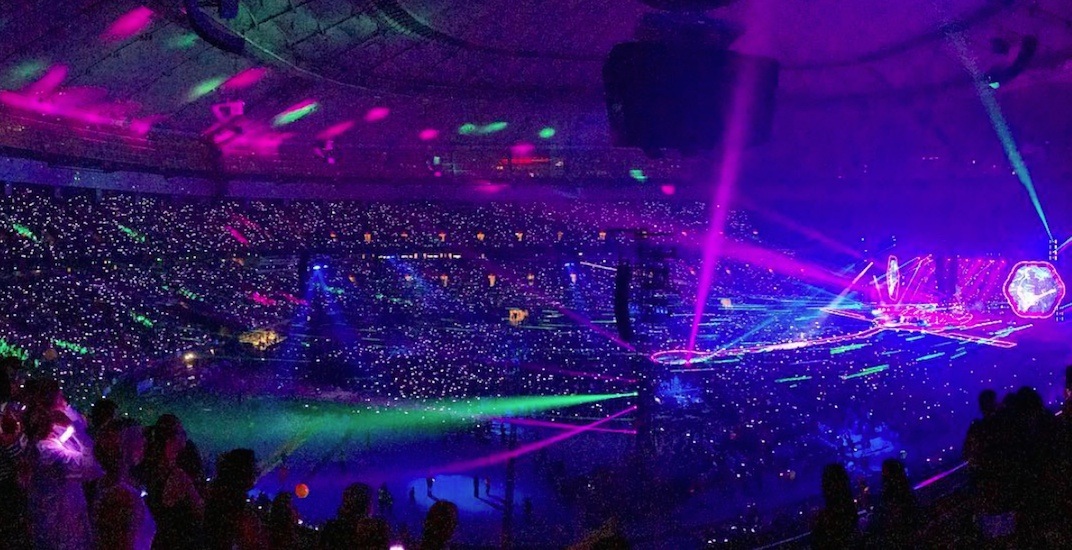 Very few bands in the world can fill a stadium the size of BC Place on their own, but that is exactly what Coldplay did Friday night.

The British rock band descended onto Vancouver for the first time in five years as part of their 123-show ‘A Head Of Dreams’ world tour.

But this performance was so much more than a concert, as even attendees who weren’t fans of their music could have appreciated the electric atmosphere.

It was a spectacle that was reminiscent of the Olympic Opening Ceremony held in the stadium in 2010 when spectators were provided with miniature flashlights to create a dazzling light show backdrop to the performances.

For the Coldplay concert, with the latest show technology, this same kaleidoscope effect was duplicated by giving fans specially-designed LED wristbands at the entrances. The wristbands were remotely programmed to change colour on cue.

And there were also plenty of fireworks, confetti, balloons, and special lighting effects.

Near the mid-way point of the show, frontman Chris Martin reminded the audience of his fondness for Vancouver, and that this city was where the band made its breakthrough in North America. In 2001, they performed their first live show in the continent at the Commodore Ballroom.

This was Vancouver’s fourth mega concert of 2017 held at BC Place, following U2, Metallica, and Guns ‘N Roses earlier in the year. But those other performances were no competition, as Coldplay easily delivered one of the best concerts in the history of the city.

Yeah yeah. Coldplay’s recent library has been pretty disappointing in recent years to say the least. It’s those oldies that keep me coming back though #FixYou #Coldplay #ColdplayVancouver @markcook604

Last night I went to see @coldplay live and I experienced the best most unforgettable concert of my life. Every single moment of this performance was epic. It felt like watching a great group of talented people doing what they love while having a blast, with tons of style and crazy amazing art. Great humor and wonderful and touching music. They killed it! I will never forget this night 💗 #coldplayvancouver #coldplay #headfullofdreamstour

A night full of love and dance! Such a fun performance! #3rdtimesthecharm #coldplayvancouver

COLDPLAY-A Head Full of Dreams Waited 8 years for this moment, bought the tickets over a year ago, and I still can’t believe it happened… Needless to say though, it was an “Amazing Day” 🎉🙌 #glowinginthedark

“be good to one another.” ever since i was in the womb, i was raised on Coldplay’s music and in my entire 15 years, 8 months and 3 days of living, i’ve always wanted to see two things, yellow live and chris martin sprinting across the stage. last night, i got to see it both💛 @coldplay #coldplayvancouver

literally made a sky full of stars💫

Hire me 📸@coldplay ‘A Head Full of Dreams🔮’ -Vancouver

Coldplays show last night was one for the books!

People say that it’s impossible to be 100% happy. Last night I found out that it was indeed possible. #coldplayvancouver

Here’s a few pics from last night’s #Coldplay concert in #Vancouver. They put on a fantasic show. Our seats were not very good but the sound inside the stadium was surprisingly good.

Impromptu band meeting in front of 50,000 or so… #ColdplayVancouver R42

Some superhero, Some fairytale bliss, just something I can turn too somebody I can kiss – most amazing concert last night!! #coldplay #amazing #favoriteband #chrismartin #vancouver

Starting off the weekend pretty ok I would say! 😜 #coldplayvancouver

Look how they shine for you. #coldplayvancouver