The newly-wed and the nearly dead. In the past, this phrase was the one often associated with our Province’s capitol city–Victoria. The times, however, the are a changin’, and that sentiment is simply no longer true.

Victoria now boasts, per-capita, the highest number of restaurants for a city in all of Canada, and the second highest number in North America, next to San Francisco. It’s been called “Mini Portland,” because of the amount of artisan distilleries popping up all over the place, including spirits, craft beer and cider. 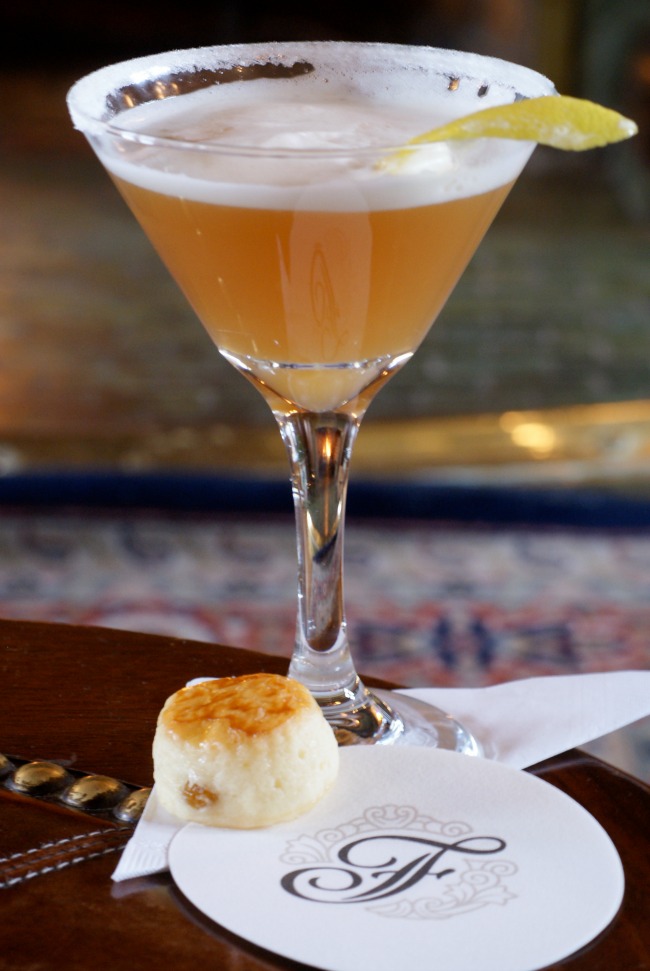 But one thing Victoria has really become known for over the last five years is cocktails. There’s a cocktail revolution in this town, built on creativity, locally-sourced, high quality ingredients, and a deep respect for classic techniques and recipes.

With the influx of younger, hipper, more food-and-drink savvy tech-types (thanks to a boom in tourism and tech sectors), came the demand for well-crafted food and drink. These consumers want local ingredients, and they don’t mind paying a little more for quality.

Cocktail culture in Victoria kicked off in 2008 with the opening of the now-defunct Solomon’s, but you can’t talk to anyone about Victoria’s cocktail scene and not hear the name Shawn Soole. He literally wrote the book on it. He started off at Clive’s Classic Lounge, and then moved on to Little Jumbo (where Nate Caudle, with whom he wrote Cocktail Culture, now rules the bar). These two bars, along with Veneto, form the trifecta of great cocktails in Victoria. 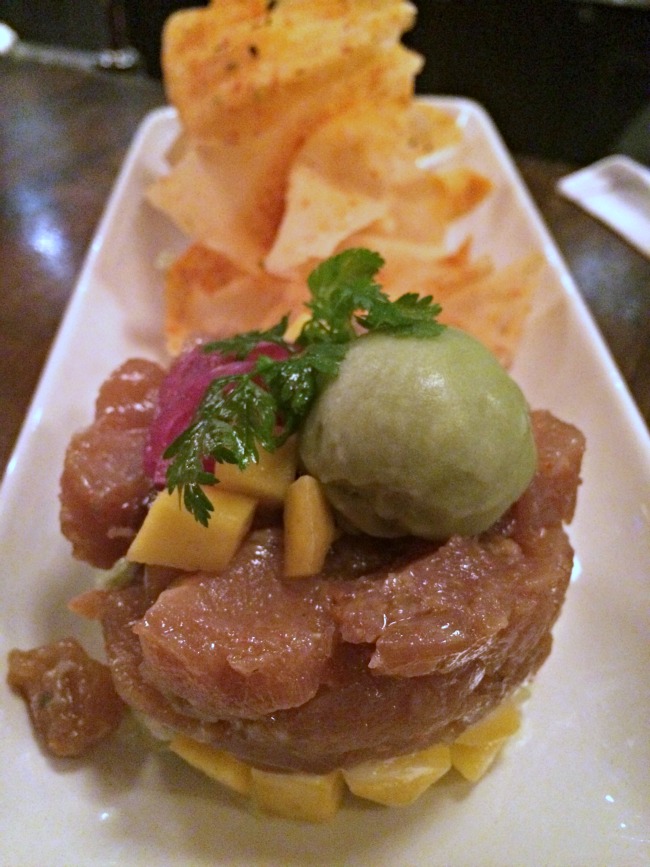 Every mixologist I talked to in Victoria said the same thing: the culture thrives there because of the generosity of the old guard. Soole, Caudle, and guys like Simon Ogden from Veneto, regularly mentor the younger bartenders who are coming up through the ranks and learning their craft. They hold monthly Bartender Bootcamps, host competitions, and pool their resources to source hard-to-find ingredients. The result has been a cohesive community that really sticks around.

“In Vancouver, the average bartender moves around a lot,” confirms Caudle.  “But in Victoria, bartenders stay in one place and learn the craft.”

“We’re not competitive, we’re supportive of each other,” confirms Jayce Kadyschuk, head guy at Clive’s. “We’re happy to share recipes with each other.”

They are passionate about what they do, and they stay for the community and the lifestyle. “Victoria has aspects of the big city I like, but with the small town amenities,” says Nate Caudle, echoing the sentiments of almost every single other bartender I interviewed in Victoria.

And it shows in the final result. But don’t take my word for it. Book yourself a trip to Victoria and explore “The Cocktail Trail” for yourself. 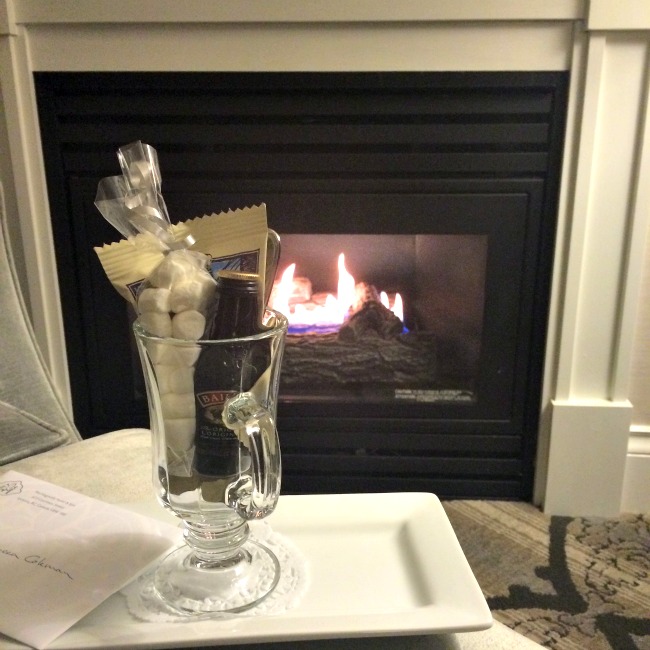 Bailey’s Hot Chocolate by the fire at the Magnolia Hotel and Spa. (Photo by Rebecca Coleman)

Obviously, safety is #1 concern here, so it’s important to pick a spot in the heart of the city that is within easy walking distance to all the bars. The Magnolia Hotel and Spa fits the ticket perfectly. It’s a sweet little boutique hotel in the middle of downtown. You’ve got the Parliament Buildings at your back, and the inner harbour at your feet. The staff is wonderful, and there’s also a spa if you want to kick your relaxation up to the next level.

Where to drink and eat

A word to the wise: sit at the bar. While most of these lounges have table service, it’s really worth it, if you are a cocktail nerd, to sit at the bar and watch the show. You can talk to the bartender, ask questions, and just generally soak it all in. 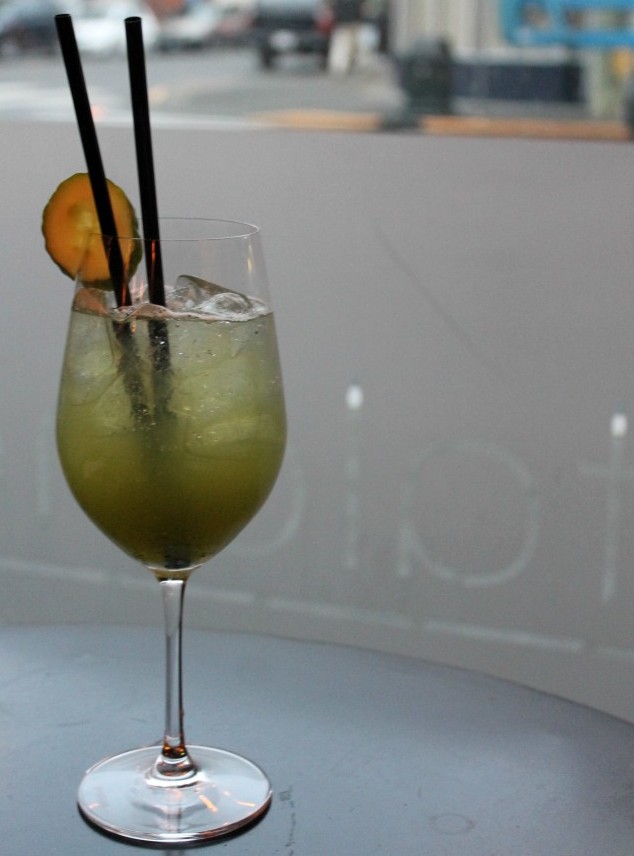 Seeing as you’re there anyway, duck down to Catalano in the lobby of the Magnolia for Happy Hour between 4 and 6 p.m. Here the house specialty is The Coastal Gin and Tonic, made with spirulina, and the Cicchetti is half-price. I particularly loved the chicken paté and the chorizo puffs.

The Bengal Lounge at The Fairmont Empress 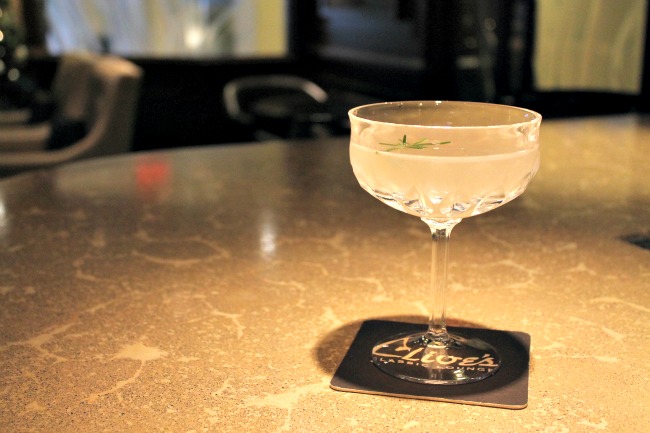 After Prohibition was lifted, the Bengal Lounge was one of the first lounges in Victoria to get a liquor license, and they’ve been slinging drinks ever since. The Bengal Lounge is an experience: everything here is old-school British. It’s all dark wood, deep leather chairs, and, yes, there is a bengal tiger skin on the wall above the fireplace. The signature cocktail here is The Empress 1908, created by one of the bartenders here to celebrate The Empress’ centennial in 2008. It’s a “sour” made with tea-infused vodka, refreshing and smoky all at once. It comes garnished with a tiny version of The Empress’ famous scones.

Clive’s is ground zero for cocktails in Victoria. Jayce and Brendan will set you up right, whether you are craving a classic or something with a modern twist. The menu changes seasonally, and they do a cool selection of global cocktails that take inspiration from all over the world. Try the West Coast Gimlet, made with local Stump Gin (it tastes like Christmas Trees), or my all-time favourite, The Dirty Little Secret.

Finding Little Jumbo is like finding a pearl in an oyster. It’s a tiny location, tucked away down a long street, and an even longer hallway. You get the feeling that it’s Prohibition, and you’re doing something faintly naughty, and that makes it all the better. The room is small and long, but warm and cozy. The menu changes every six weeks, so there’s always something new. Here, alchemy is the word. This is where you’ll see technology in bartending. I had Spurs and Saddles (which was both conceived by, and also made for me by Nate Caudle, the head bartender here), which begins with a glass being smoked upside down over a barrel stave that’s lit on fire. Then, for more smokiness, the cocktail is made with bourbon. It’s insanely delicious.

The food here is great, too. The owners put a great deal of importance on having an amazing menu along with amazing cocktails. The tuna tartare was my favourite bite of the night–it was the perfect balance of richness in the creamy tuna and avocado, heat, crispiness, acid, and earthiness from the sesame oil. 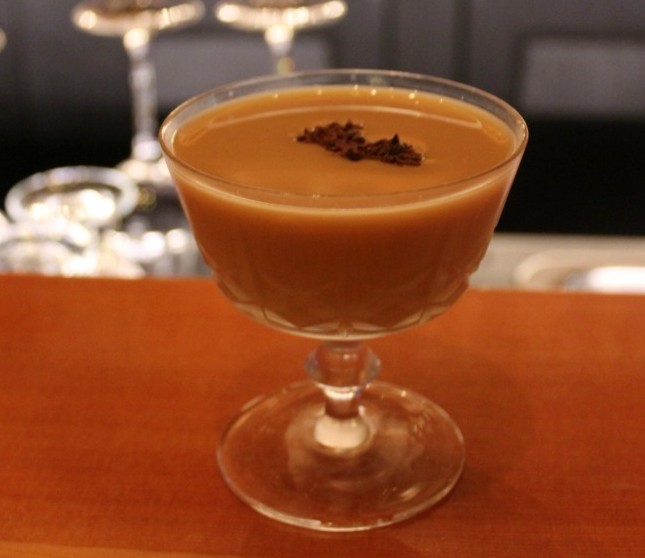 The newest kid on the block, Olo, formerly Ulla, has been open less than a year, and already it’s gotten some great accolades for both the food and the drinks. Chef/owner Brad Holmes’ vision is farm-to-table, local, and sustainable. I’ve never had a better Pasta Carbonara in my life.

The cocktail program was created by Sean Soole (yep, there he is again). My cocktail choice here was called Turkey Gone Nuts. Created by bartender Eric Fontaine, this one took first prize at a recent competition. It was like grown-up chocolate milk, not too sweet, a bit smoky, all delicious. It’s base is Wild Turkey Bourbon, with a cacao-husk infused syrup, which carries a pleasant bitterness.

Veneto just feels like home to me. One of my favourite places in the entire world is sitting at this bar. The room is big–long and with lots of wood paneling, deep booths, and marble. There’s an absinthe fountain on the bar, which immediately conjures up visions of Paris’ Montmartre, and poets arguing loudly in a corner.

80% of the cocktails that fly off the bar at Veneto belong to the category of “spin the wheel.” Now, “the wheel” is metaphorical–you simply tell the bartender what kinds of drinks you like, and they will make you something. It’s usually brilliant. They are also big fans of the classics here. I had a long and very nerdy conversation with head bartender Josh Boudreau about how to make the perfect Old Fashioned. Simon Ogden’s Wax Poetic is one of my all-time favorites here. The food is also wonderful–treat yourself to duck poutine at the end of the night.