Coast Capital will be moving their head office space from Guildford to Surrey City Centre. The nine-storey, 180,000-square-foot building will be built alongside the King George Skytrain station, with completion slated for late 2015.  Locating the head office near to the King George Skytrain Station, a major transit hub, will also provide excellent commuting options to staff.

B.C.’s second largest credit union has signed a contract with PCI Developments Corp. for the construction and leasing of about 70 per cent of the approximately 180,000 square foot, nine-story property, with a targeted late 2015 completion date. Coast Capital’s “Help Headquarters”, as the new head office will be known, will join buildings like the Central City Tower and City Centre Library that have established Surrey as the home for some of the province’s most groundbreaking modern architecture and an attractive location for businesses.

Definitely a sexy building and a good addition of jobs to what is currently a lifeless city centre for most of the day. 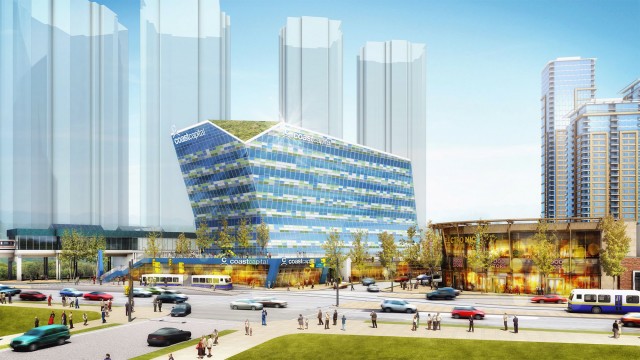