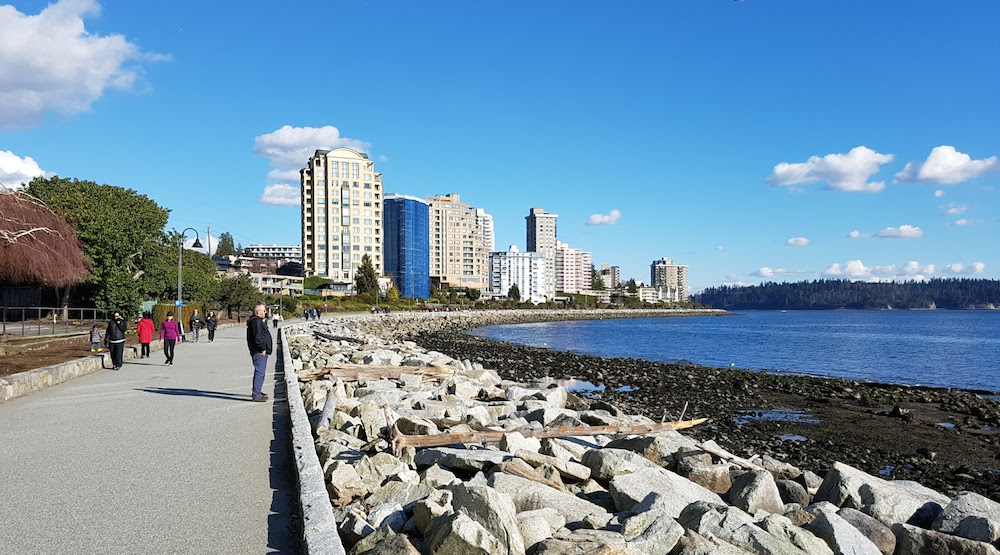 If CN Rail has its way, West Vancouver taxpayers would be forced to pay millions of dollars for the continued public use of the popular waterfront seawall from 18th Street to Dundarave Park.

Court and government documents obtained by Daily Hive indicate that the railway company wants the District of West Vancouver to pay an annual “market rent” of $3.7 million in order for residents and visitors to use a 1-km section of the 1.7-km-long Centennial Seawalk, which was built by the District of West Vancouver and considered as public park space.

This stretch of the Centennial Seawalk runs along a railway owned by the provincial government but leased by CN Rail as part of the 2004 sale of BC Rail. The company has a 60-year lease over the railway corridor, which includes the land the public seawall is located on.

After two years of failed negotiations, earlier this year CN Rail decided to cancel the lease agreement that began in 1967 and request that the Seawalk paving and structures on its property be removed. A notice of civil claim filed to the BC Supreme Court by the company pursued damages and an injunction against the District for trespassing its property.

The legal team with the municipality quickly countered with a response to the civil claim, and offered to pay $12,500 annually instead. They described the company’s rent request as “excessive”

“The Plaintiff’s allegations of trespass is misconceived,” reads the District’s response, adding that CN Rail is “not entitled to require the District to remove the structures comprising the Seawalk, which have become part of the land.”

“The District and its residents have used the Seawalk for almost 50 years, with no request for, or discussion of, anything beyond nominal payment. Millions of dollars in public funds have been expended to build, re-build, and maintain the Seawalk.”

The District asserts that it would be “unconscionable for the Plaintiff to be able to terminate use of the Seawalk.”

A $3.7 million annual lease would be highly unfeasible for the small municipality of 41,000 residents without a relatively major municipal tax hike or reallocation of resources. The municipal government’s operational budget for 2017 is $106 million, including $19 million for parks and recreation and $4.3 million for engineering and transportation.

Annual rents during BC Rail’s management period were nominal, starting at just $25 and never exceeding $500 per year until approximately 1995, according to the District. This nominal rent was only designed to cover BC Rail’s “administrative costs” with no intention of charging high market rents as a significant revenue generator.

In its response, the District argues it has maintained and inspected the seawalk to keep it safe for both pedestrians and free of ocean debris, which could restrict the use of not only the seawalk but also the adjacent railway. As well, the District has conducted shoreline protection works to the “mutual benefit” of the seawalk and the railway.

However, recent signs posted by the District along the seawalk warn users that the municipal crews have reduced seawalk maintenance “to the level required for public health and safety” due to the ongoing legal battle.

As a measure of recourse in response to the lawsuit, the District submitted an application to the Canada Transportation Agency, the federal authority that regulates and arbitrates transportation decisions, for its ability to continue to use the seawalk. A decision has yet to be made.

CN Rail first approached the District about a proposed hike in the rent in 2015. The year before, competitor CP Rail escalated its 15-year-long fight with the City of Vancouver over its Arbutus Corridor property by announcing its intention to remove illegal community gardens and reactivate the railway for storage uses.

In 2016, the City of Vancouver announced it had finalized a $55 million deal to acquire the Arbutus Corridor from CP Rail for the purpose of turning it into a cycling and pedestrian greenway with a future light rail transit line.