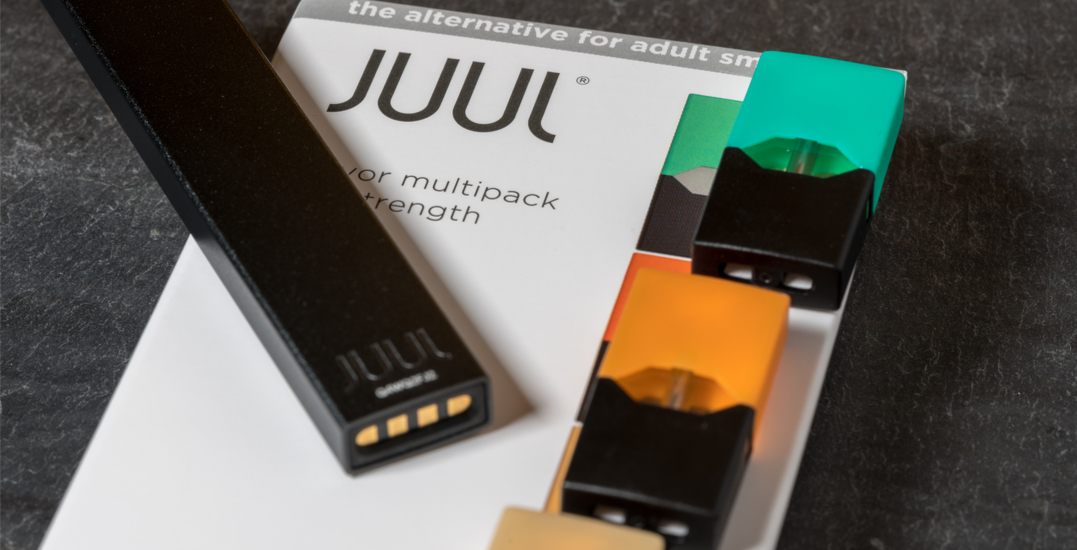 A notice of civil claim has been filed in the BC Supreme Court, seeking a class action lawsuit against vaping giant Juul.

According to the court documents, Owen Mann-Campbell and Jaycen Stephens claim they began using Juul e-cigarettes in 2018 and “subsequently experienced adverse health conditions as a result of vaping, including pulmonary disease.”

Juul is a leading e-cigarette brand that says its mission is to “provide a satisfying alternative for adult smokers.”

The device is battery operated and works by heating a pod filled a “salt-based nicotine e-liquid formula” which creates an aerosol or vapour.

The notice of civil claim states that last year, Mann-Campbell and Stephens began using Juul e-cigarettes when they were 18-years-old.

In 2019, Mann-Campbell and Stephens were advised by their family doctors that their symptoms were likely connected to vaping and they were told to stop using e-cigarettes.

Both plaintiffs say they “would not have purchased and/or used Juul e-cigarettes had [they] been provided with accurate information and/or warnings with respect to the possible health complications from vaping.”

They claim they were “misled” by Juul with respect to the “safety and efficacy” of their products and advertising claiming the e-cigarette is a healthier alternative to smoking.

None of the allegations have been proven in court but Juul has recently become the centre of controversy in the US and Canada.

Last week, the company’s CEO Kevin Burns announced he was stepping down in the midst of a vaping-related health crisis in the US. Juul also said it would discontinue its US-based Facebook and Instagram accounts in order to “remove inappropriate social media content generated by others on those platforms.”

According to the US Centres for Disease Control (CDC), there have been 805 lung injury cases reported in the country and 12 deaths have been confirmed in 10 states.

“The latest findings from the investigation into lung injuries associated with e-cigarette use, or vaping suggest products containing THC play a role in the outbreak,” said the CDC.

On its website, Juul states that its products do not “include THC, any compound derived from cannabis, or vitamin E compounds like those found in cannabis-related products”

In early September, Health Canada issued a warning to Canadians who vape to monitor themselves for signs of pulmonary illnesses and seek attention immediately if they experience these symptoms.

On September 18, the Middlesex-London Health Unit announced that a youth had been diagnosed with a severe respiratory illness that was linked to the individual’s use of vaping products.

“This is the first confirmed case in Canada. This follows the report out of the Middlesex-London Health Unit in Ontario of another possible case,” said Health Canada in a statement.

“Vaping is not without risk, and the potential long-term effects of vaping remain unknown. Non-smokers, people who are pregnant and young people should not vape,” warns the agency.