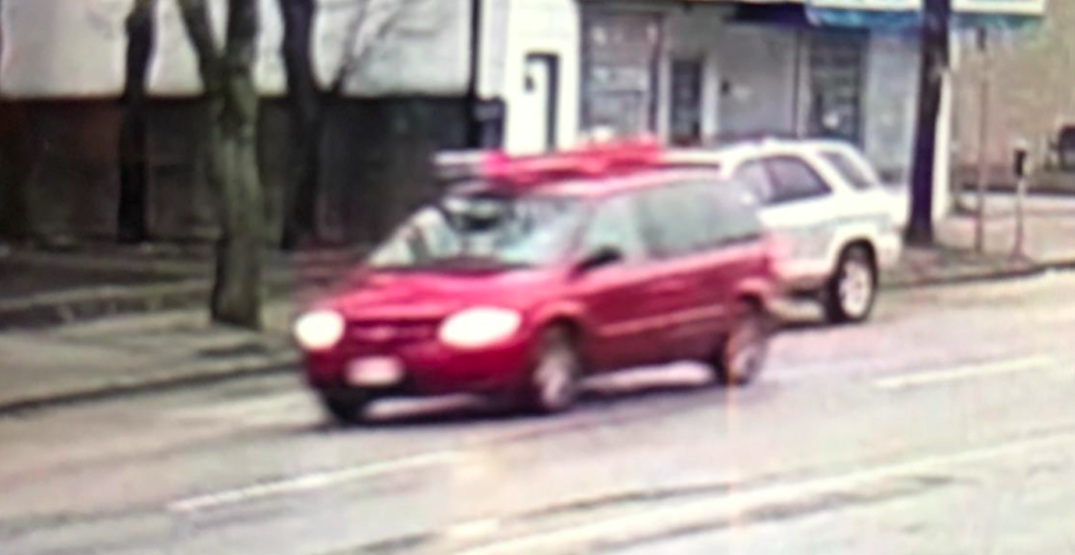 Vancouver police are investigating an alleged attempted child abduction in South Vancouver on Tuesday afternoon, and are asking for the public’s help in identifying the suspect.

In a release, police said that around 3:20 pm on Tuesday, a “12-year-old girl was walking home from school in the area of East 50th Avenue and Fraser Street when she was approached by a red minivan.”

The driver reportedly got out of the van and asked the girl if she would like to come with him. The girl, however, “said no and ran back to her school where she alerted school administration.”

The suspect is described as white man in his mid-50s, about 5’10” with a pale complexion, white hair, “yellow teeth,” facial hair, and a medium build. He was wearing a grey t-shirt and blue jeans at the time time of the incident.

As part of their investigation, police have also released a photo of a red minivan with tinted windows and a red work ladder attached to the roof. The van is believed to have been in the area close to the time of the offence and police are looking to speak to the driver of the van or to anyone who may have information about the van.

In the meantime, police are praising the young girl for how she handled the situation.

“This young girl absolutely did the right thing by not engaging with the man and then getting to a place of safety,” said VPD Const. Tania Visintin, VPD. “We commend her for her bravery as this was a terrifying situation.”

Anyone who may have information on the incident is asked to call the Vancouver Police Department at 604-717-0603. Those who wish to leave an anonymous tip can do so by contacting Crime Stoppers at 1-800-222-TIPS (8477), or by leaving a tip online.