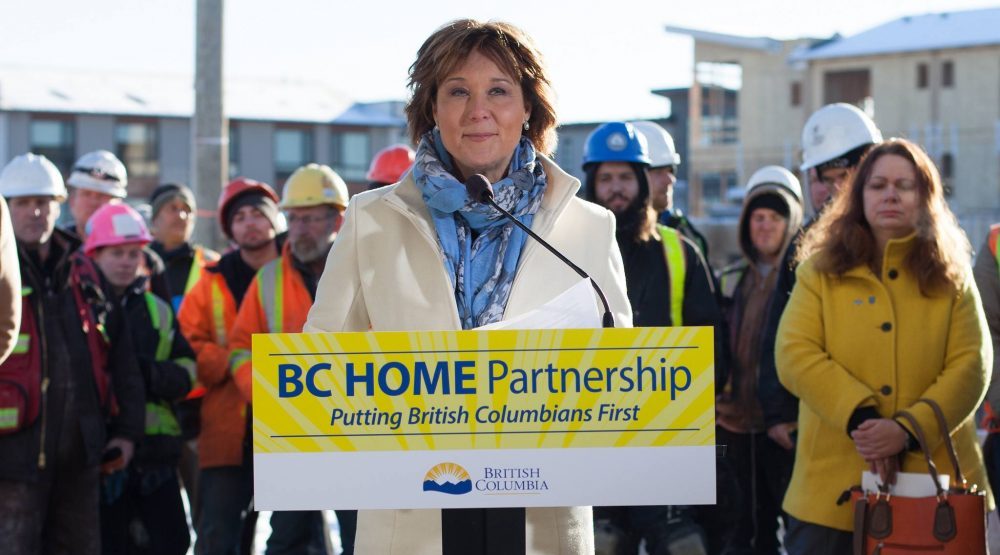 On Thursday morning, the BC government announced the BC HOME Partnership plan to help first-time homebuyers get into the housing market.

The BC Home Owner Mortgage and Equity (HOME) Partnership program will contribute to the amount first-time homebuyers have already saved for their down payment.

The program will provide up to $37,500 (or up to 5% of the purchase price) with a 25-year loan that is interest-free for the first five years.

Daily Hive spoke to Premier Christy Clark immediately after she announced the program this morning.

“Many people can qualify for a mortgage and then can’t scrape together that down payment,” Clark told Daily Hive. “What we are saying is, we are going to put up to $37,500 towards that lump sum payment for you, just to get you over that hump.”

The Province will be investing about $703 million over the next three years to provide first-time buyers with the loans.

‘We can afford this now’

Clark confirmed that the BC government is using the money from the property purchase tax to fund the loans.

“All that tax [the BC government] collected, we are transferring that into this fund to support people. Part of that is the foreign buyer’s tax, part of it is the luxury tax on homes over $2 million,” Clark said. “So it just seems like the right thing to do to take that property purchase tax money and put it into first-time homebuyers’ pockets.”

As for the timing of the announcement, Clark made no mention that it comes a few months ahead of the upcoming provincial election in May 2017.

She said the provincial government thought this was the right time for the announcement because they are now able to afford the program.

“We can afford [this] now,” Clark said. “We have worked hard over the last three years to make this economy a strong one. We have the ability to share the strong economy with people who need the help.”

To qualify for the loan, first-time home buyers must be approved for an insured high-ratio first mortgage. They also must meet the following criteria:

Applications for the BC Home Partnership program open on January 16, 2017. The program aims to help over 42,000 first-time buyers purchase their first home.

“I hope there is an overwhelming interest in [the program], and no, there is no cut-off point,” Clark said, addressing the concern that more British Columbians than expected could apply for the loans.

When asked about the possibility of first-time homebuyers running into financial trouble once they have to start paying back the loan, Clark seemed confident that would not be an issue.

“Well, they don’t have to pay [the loan] back right away. It gets rolled into your 25-year mortgage,” Clark said. “Having the $37,000 spread over 25 years in terms of paying back, I don’t think is going to pose a significant hardship.”

‘Affordability is a huge problem’

Clark acknowledges that housing affordability is still an issue in BC. According to MLS Home Price Index, the average price for a detached home in Greater Vancouver will cost you a hefty $1,511,100 on average.

“I think that affordability is a huge problem, which is why we are trying to deal with it,” she said, mentioning the BC government’s latest crackdown on realtors, as well as the luxury home tax for homes over $2 million, and the 15 % on the property transfer tax rate for foreign buyers.

“The thing about affordability is the province cannot solve it on its own with a foreign buyer tax and those other measures,” Clark said. “Cities have to step up and put more houses on the market. It’s the basic laws of supply and demand.”

For Clark, the provincial government has made a difference in slowing the growth in the market, especially with the introduction of the tax on foreign home buyers.

“Do I think prices will go down? No, I don’t. But I hope they will go up in a much more moderate way,” she said.