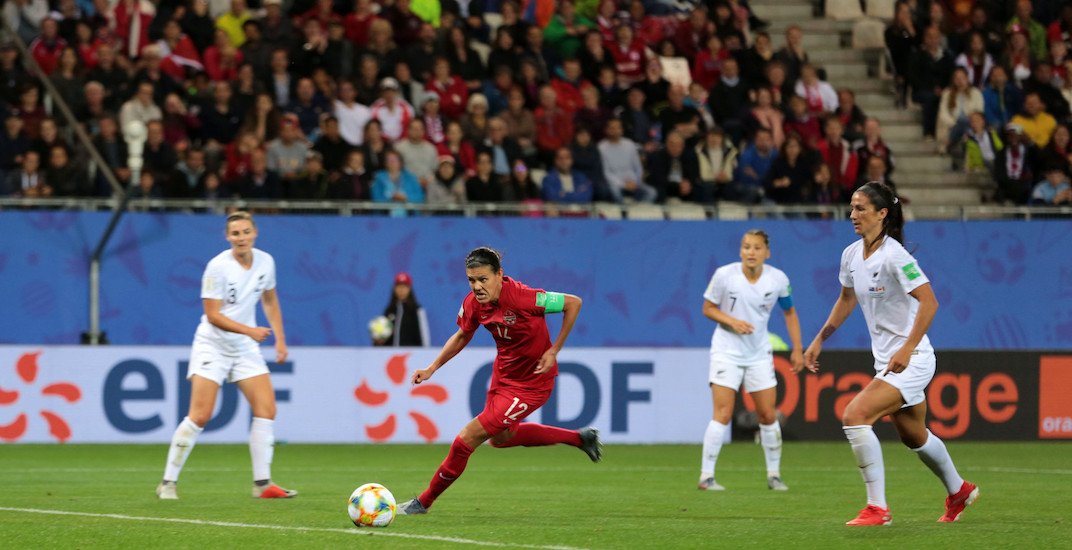 Canada is off to a great start at the FIFA Women’s World Cup in France.

With wins over Cameroon (1-0) and New Zealand (2-0), Canada has begun this tournament with a 2-0 record for the first time in their history. They’ve already earned a spot in the Round of 16, and with one more group stage match remaining against the Netherlands on Thursday (9 am PT / 12 pm ET).

All that remains is determining whether Canada or the Netherlands will take top spot in Group E. Both teams have six points. Canada must win, because the Netherlands hold the tie-breaker with a 4-3 goals scored advantage.

So far, Canada has succeeded without a goal from captain Christine Sinclair.

As she chases Abby Wambach’s all-time goals record (184), Sinclair is doing things her way. Just three goals back of Wambach, supporters would love to see her break the record in France.

#NED reporter asked #CAN Christine Sinclair if she needed one game of rest?

"I don't like to rest. I don't know. That's up to the coach to decide."#CanWNT #OnzeJacht #FIFAWWC pic.twitter.com/LtOjJY0FFw

“Sinc, she leads by example,” Canada’s, Shelina Zadorsky explained to reporters in France. “She’s really stepped up speaking more and more for our team, and really bringing us together when we need it. She’s just so solid, and the most consistent player day in, day out, in training, and in games.”

There are other teams with star players who are more vocal, present in the media, and closer to their fans, but Sinclair isn’t that type. She leads in a different manner.

“I think that it’s a role that I’ve evolved into,” Sinclair admitted. “I think I was thrust into it at a young age. I’m not the most vocal person, I never will be. I think I’ve learned the power of my voice. I’ll speak up when it has to be said, and then leading on the field.”

The Burnaby, BC native has a large presence about her. Just as imposing as she is to opposition goalkeepers, Sinclair brings a quiet confidence, and calmness to the fifth youngest squad at the World Cup.

“She’s a quiet person,” Canada’s, Janine Beckie explained. “She’s to herself. She comes out of her shell sometimes, she’s really funny. She just brings personality to the group. When she’s comfortable it comes out.

“She’s a good leader, so I think she’s careful about what she says. She’s super inclusive of the young ones, which is really great. She includes herself in a lot of things, which is great when you have someone of her calibre.”

#CanWNT Sophie Schmidt asked about Christie Sinclair. “Christine Sinclair is the definition of a leader. It puts you on ease, when she’s on the field with you.” #FIFAWWC pic.twitter.com/D99mrJjZC5

Sinclair is in a class of her own. She can still score from almost anywhere on the pitch, or deliver a sublime pass to a teammate. She has talent that you just can’t teach. Her skill set, and quality on and off the pitch is a reason why she is Canada’s top footballer.

“She’s an incredible leader,” Canada’s, Steph Labbe said. “She leads this team by example. She’s a woman of few words, but when she does speak, people listen, and her voice carries a long way.”

Winger Deanne Rose, 20, is in her first World Cup. Having the ability to learn from someone like Sinclair has helped her solidify her role with Canada. In a time when some athletes aren’t in touch with the next generation, Sinclair leads everyone.

“When Sinc is talking, no one else is talking,” Rose explained. “She’s a very powerful leader, someone that you automatically look up to because she has presence of power, and confidence. She’s the best captain I’ve ever had. She knows that everyone has her support.”

The Netherlands will be the toughest test Canada has faced in 2019. Sinclair and her teammates want to show that they’re ready to step up and beat the reigning European champions.

Should Canada finish first in their group, they’ll likely play Sweden in the Round of 16. Finishing second likely means a knockout round match against either England or Japan.