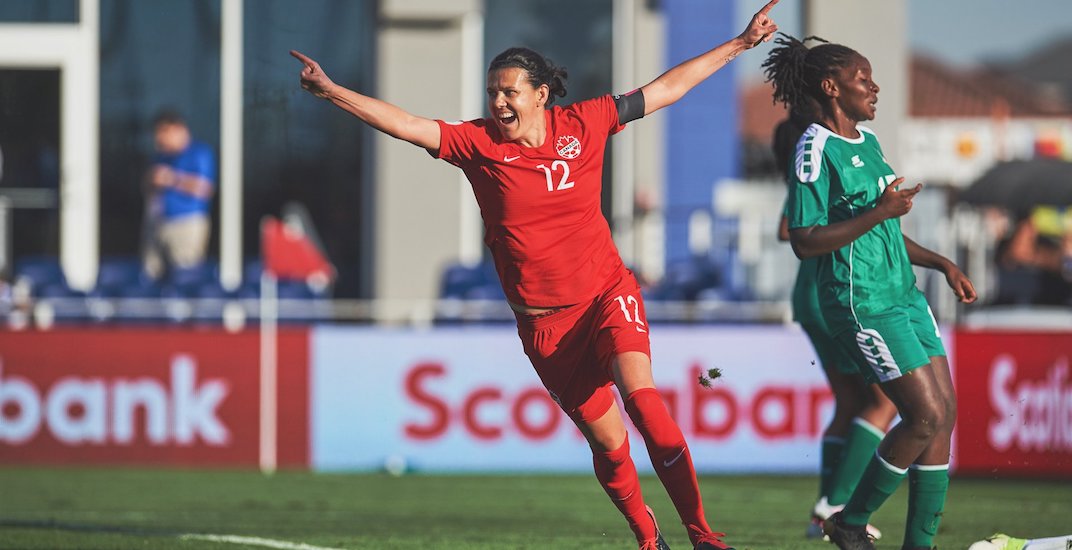 Burnaby’s Christine Sinclair tied and broke the all-time international goals record in the first half of today’s Olympic qualifying match in Edinburg, Texas.

Sinclair scored her 184th career goal on a penalty shot to give Canada a 1-0 lead over St. Kitts and Nevis, before netting the record-breaking 185th goal in the 23rd minute.

“Unbelievable. When I first started with the national team I could have never imagined standing here with the number of goals I’ve scored,” Sinclair said. “It wouldn’t have been possible without my teammates. They’ve been beside me the entire way. The coaches I’ve had, the people back home that supported me — just a massive thank you.”

“Canada’s Christine Sinclair is the greatest international goal-scorer in the world’s most beloved sport,” said Canada Soccer President Steven Reed in a media release. “We have watched her grow from teenage star on the local grounds to international superstar who is adored around the world.

“For more than 20 years, she has served as a global ambassador to our nation, continually raising the bar for our sport through her achievements on the pitch and her humble actions off the pitch.”

The greatest Canadian women’s soccer player of all time, the seemingly ageless Sinclair is still a force in her 21st international season.

“Christine Sinclair, an absolute treasure to Canada and Canadian sport, is truly deserving of her remarkable achievement in setting the world’s all-time international goalscoring record,” said Canada Soccer General Secretary Peter Montopoli. “She has been making history throughout her career, leading Canada with skill, determination, pride and honour on the international stage. There is only one Christine Sinclair and she is simply greatest of all time.”

Canada’s next match on home soil promises to be a special one for Sinclair, as you can bet there will be a ceremony planned for her when the national team takes on Australia at BC Place in Vancouver on April 14.