After going around the world in the International Space Station former astronaut Col. Chris Hadfield is back at it again in his North American Book Tour. Chris Hadfield visited Vancouver’s own Kidsbooks in Kitsilano as hundreds lined up outside to meet Canada’s first person to walk in space. We also asked Hadfield a few questions of our own. 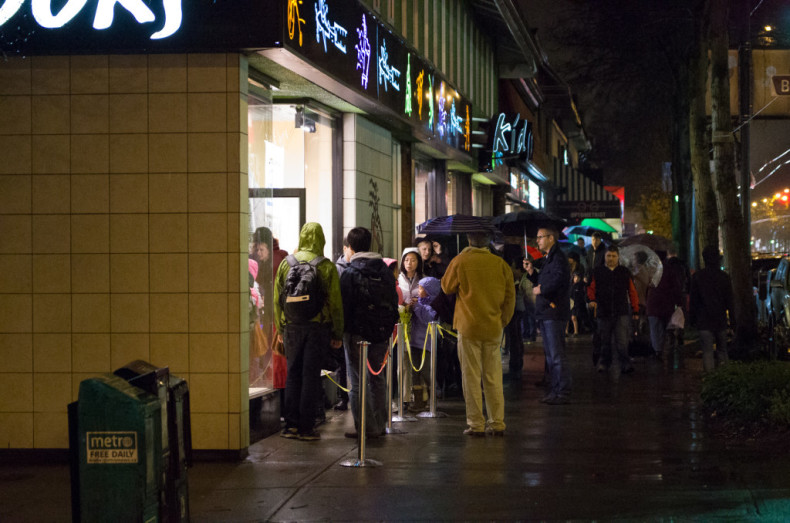 Visitors from across the Greater Vancouver area came to meet Canada’s astronaut rock star and have a copy of “An Astronaut’s Guide to Life On Earth” signed by the Commander himself. Hadfield has been in Vancouver for the last week touring the area and getting a taste of Vancouver life since he’s moved back to Canada after retiring from his career at NASA. He told Vancity Buzz that he found Stanley Park to be his favourite place in all of Vancouver.

Families from Vancouver, Squamish and White Rock came sporting their own style. Several kids were so excited that they greeted Hadfield in their very own astronaut costumes. Vancouver local Pearce House even crafted his own astronaut costume from home-made materials with the help of his parents Ashley and Sean. 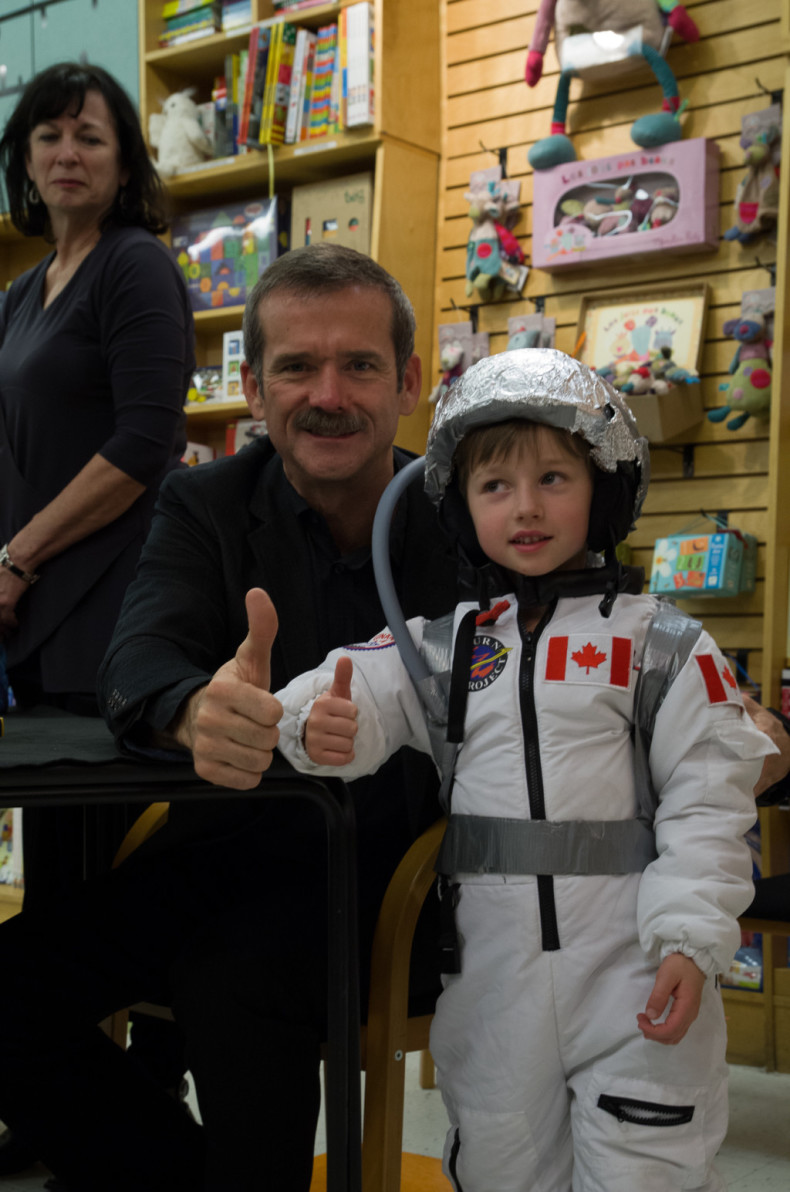 And, as expected, the Commander came sporting his trademark moustache, which others immediately followed. Squamish teacher Katrina led a group from her own school in including Lucas, Rhonda and Ben (below) all sporting facial hair in similar style to Hadfield’s. Chris laughed with joy as he found himself surrounded so many identical moustaches. Chris did tell us that his moustache is not just a Movember trend, turns out he’s been sporting the moustache since 1977! He shaved it once when he and his friends were holding moustache growing contests, but promptly grew it back when his wife insisted on its return. She asked him to never shave it again. 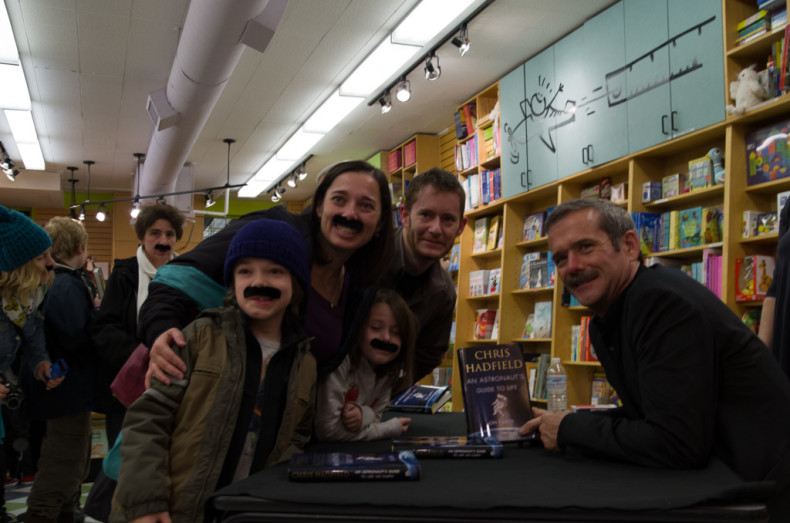 Others were more in-tune with Hadfield’s music abilities. Alec and Alex of Vancouver brought the family guitar to be signed by the Commander, who did his own rendition of David Bowie’s “Space Oddity” while aboard the International Space Station. He also told us one of his favourite stories from his new book about meeting Elton John:

I learned that Elton John and I were in the same city on the same day and that there was a possibility that we would meet. On the off chance that Elton would invite me to play a tune with him on stage, I spent several hours that afternoon learning the chords and lyrics to Rocket Man, a song I didn’t really know. As it turned out, I did meet Elton John but did not play with him on stage.  The message – be ready just in case opportunity calls. 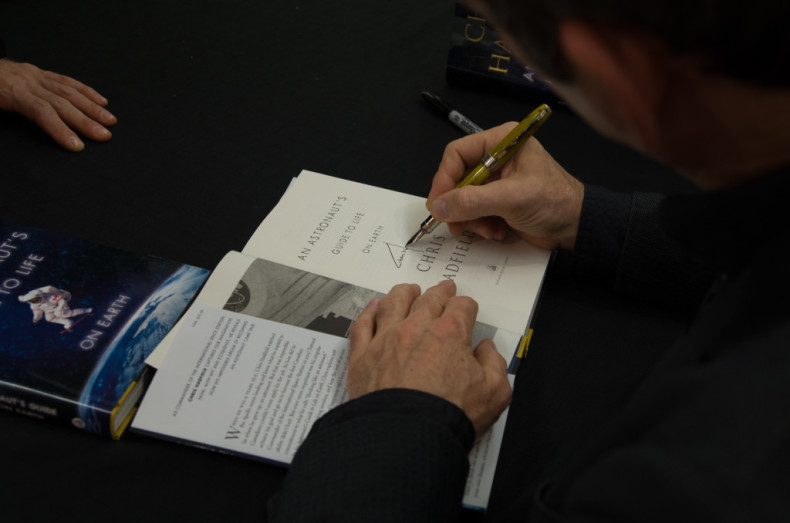 Part of Chris Hadfield’s initial success with public appearances is through his social media efforts coordinated with himself and his son. Everyone we interviewed had either been an early Twitter follower of Hadfield’s or was subscribed to his YouTube channel. Compared to other astronauts, including Neil Armstrong who some called a “recluse” after his famed moon walk, Chris is very active publicly. Hadfield says he is motivated by “the look in children’s eyes when he talks to them about space.”

We asked the Commander about opportunities for Canada to get involved in great advances in technology. He said Canada is leading the world in solid state electronics and other Canadians are encouraged to join the front. Companies like Nautel are making big advances and are contributing their technology to NASA.

Finally, we parted ways with the Commander with a question from our readers. We asked, “What would you do if you were Bruce Willis in Armageddon in those final moments?” His answer: “Get a new script!”

Grab a copy of “An Astronaut’s Guide to Life on Earth” on Chris Hadfield’s website www.chrishadfield.ca or directly at Kidsbooks www.kidsbooks.ca  in Kitsilano.