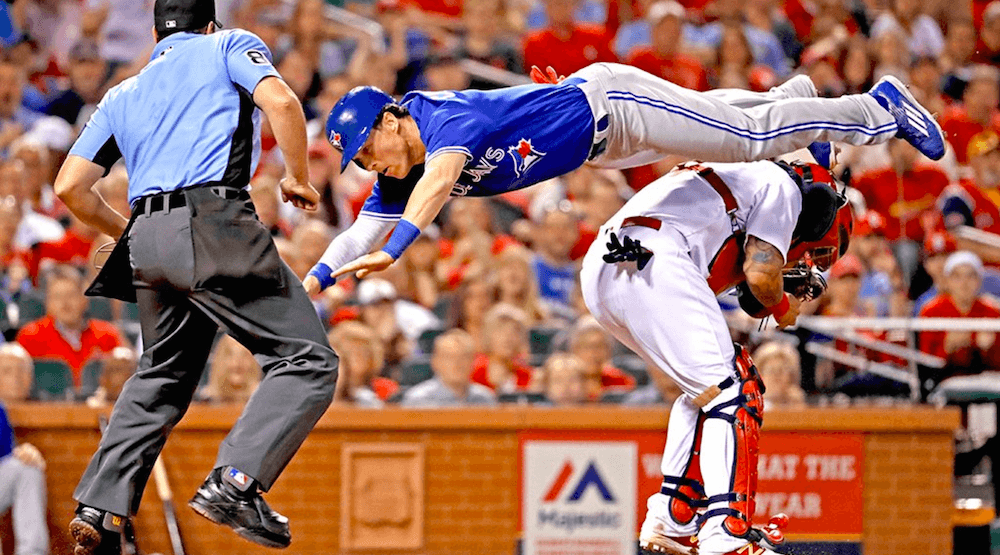 What a wild and crazy game for the Toronto Blue Jays on Monday night. Wait, crazy doesn’t even really begin to explain what happened in St. Louis with the Jays and Cardinals. It’s was more like “Bizarro Blue Jays Baseball.”

Blue Jays catcher Russell Martin started the game at third base and that was the least crazy thing that happened for the Jays.

Chris Coghlan – who may be a superhero in his spare time – cemented himself in Blue Jays’ lore with a leap that will live on forever. He dove over Yadier Molina in what can only be described as a routine from Cirque du Soleil.

“I told you I wasn’t gonna slide.” – Chris Coghlan. pic.twitter.com/DQIG1qAYm2

Coghlan’s dive instantly set Twitter ablaze and left fans awestruck. In fact, after multiple viewings and seeing it from alternate angles, one gains a new sense of appreciation for what Coghlan did. That’s how good it is.

Daring dives like these have been attempted in the Minor Leagues, but to the best of my knowledge, never has something like this been pulled off successfully at the Major League level.

Coghlan’s dive into home plate will go down in history. It’s the type of play that will live on in “Best of’s” and Top 10 lists forever. You may never see another baseball play like that ever again. Coghlan’s teammate Marco Estrada said it best:

But the Blue Jays didn’t stop there. No, they weren’t content with supplying a “play of the year” candidate in that game. They wanted things to get really weird.

After Coghlan’s play put the Blue Jays ahead, the Cardinals answered back in the following inning. The Blue Jays went ahead yet again in the ninth inning, and once again the Cards responded.

Teams tend to get desperate in extra innings and this is when position players are called upon to pitch and pitchers may be tasked with pinch running. Marcus Stroman did one better; the pitcher entered the game as a pinch hitter in the 11th inning.

Not only that, but he delivered a pinch hit double and eventually scored the decisive run in a 6-5 win for the Blue Jays.

A pitcher hit a double and scored the go-ahead run. A starting catcher played most of the game at third base. A backup infielder dove headfirst over a catcher with the grace and beauty of a ballerina and scored.