The CMHC released their third quarter Housing Market Assessment, which serves as an early warning system when problems are detected in Canadian home markets.

One of the most problematic aspects of Vancouver’s housing market is overvaluation, the corporation says, largely due to the high cost of detached homes.

Overheating and price acceleration in Vancouver are considered moderate problems caused by lack of supply and high demand in the city’s housing market.

“Single-detached home prices continue to be at levels higher than those consistent with financial, economic and demographic fundamentals,” reads the HMA report. “Inventories of new and resale homes continue to decline and rental vacancy rates remain low, indicating weak evidence of overbuilding.”

“Taking all factors into consideration, the overall assessment for Vancouver indicates strong evidence of problematic conditions.”

Other aspects taken into consideration by the corporation are acceleration, overheating, and overbuilding. 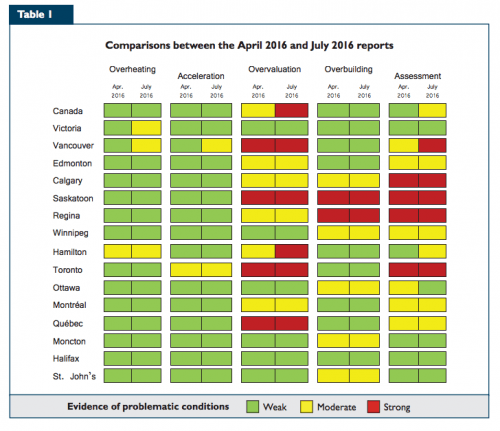 Toronto also showed strong signs of overvaluation, along with Quebec City and Hamilton.

Nationally, the CMHC says the entire country is showing strong evidence for overvaluation.