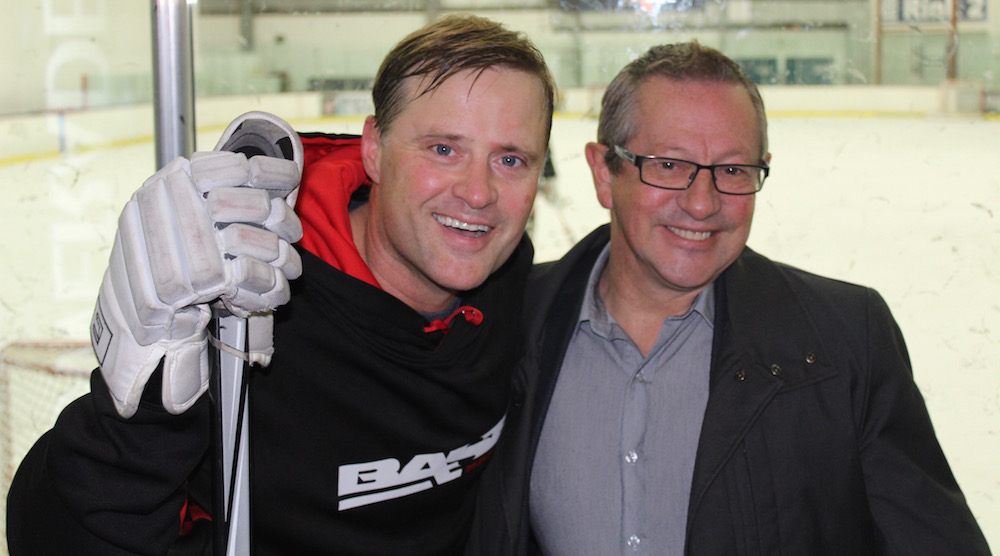 The Chinese women’s national hockey team is in town ahead of their game against the UBC Thunderbirds at the Doug Mitchell Thunderbird Sports Centre tonight.

China, nicknamed the “Lady Dragons,” got some help at their game-day skate, as Canucks legend Cliff Ronning put them through the paces this morning at 8-Rinks in Burnaby.

Also on hand at 8-Rinks was former Canucks owner Arthur Griffiths, who is helping the Chinese Ice Hockey Federation promote their trip to Canada.

“We are really focusing on shooting, shooting techniques to help them in their game tonight,” Ronning said.

“I think it’s exciting for the game of hockey. It’s kind of like when Wayne Gretzky went to LA. It changed how that part of the world viewed ice hockey. Hopefully events like this will help the Chinese look at ice hockey for the great game that it is.”

While the Gretzky-to-LA analogy may be a bit of an exaggeration, Ronning raises an interesting point. There’s more than a billion people in China. If you can turn even a small percentage of people onto hockey, it will help to grow the game.

Tonight’s game will be live-streamed on the internet in China.

“They seem a little bit nervous to be honest,” Ronning continued. “They have four games while they are here and they know they are going to have to play their toughest opponent first. But it will be a great experience for them.”

China is the 15th-ranked women’s hockey team in international hockey. They last qualified for the Olympics at Vancouver 2010.

UBC, on the other hand, are currently the second-ranked university team in Canada.

“It’s a little intimidating knowing that they are being coached by the best – but at the same time we know we have good coaches as well,” said UBC assistant captain Kelly Murray after watching Team China practice with Cliff Ronning.

“It will be a good game tonight – they are a really fast team.”

China versus UBC will begin at 8 pm tonight, at the Doug Mitchell Thunderbird Sports Centre.