A fatal house explosion in Chilliwack Thursday night has resulted in a tragic ending for one Rosedale family. According to an online confession, the house was lit on fire after a father allegedly shot and killed his daughter, wife and sister.

The Province first reported the story Friday morning after discovering a Facebook status made by Randy Janzen, a resident of the home that exploded on Llanberis Way in Rosedale, B.C., during a police standoff on May 7.

B.C. RCMP have not spoken publicly on the incident, but confirmed to The Province they were investigating “a very serious police incident which has resulted in the deployment of several specialized units.”

Janzen reportedly wrote a tragic and disturbing Facebook status on Thursday moments before killing himself by setting his home on fire.

Shortly after 7 p.m. on Thursday, a SWAT team arrived at the family home after residents reported hearing shots and a loud bang. It was then that the fire broke out.

Janzen claims his daughter, Emily Janzen suffered debilitating migraines that causes constant pain and depression. He also shot his wife and sister to protect them from the pain Emily’s death would cause.

Read Randy Janzen’s Facebook status below, sourced from The Province:

Over the last 10 days I have done some of the worst things I could have ever imagined a person doing.First to do with my dear,sweet loving daughter Emily.The best little girl two parents could ever hope for.She was talented and smart and filled out hearts with her laughter.She was always willing to help with a smile even when she was feeling lousy.Emily excelled at so many things but slowly had to stop almost everything because of the migraines.(But when it effected her beloved singing it took a part of her soul).She has been very ill with migraines that have plagued her since Elementary School.This has caused her to miss two years at UBC which completely broke her heart.I don’t think anyone really knew how much pain Emily was in on a daily basis and the severe depression that these migraines caused her.Emily watched her friends from high school move on with their lives while hers was spent wrenching into a puke tray and hours at the Emergency Rm.Since Oct/Nov her migraines have escalated to excruciating again and I just could not see my little girl hurt for one more second.She had shown unimaginable strength through a lot of migraine pain over the years and always seemed try and look on the bright side and always loved talking about things “When I get better lets do this and let’s do that”.I wish sweetheart.Emily had tried everything to get better but nothing seemed to help her. I took a gun and shot her in the head and now she is migraine free and floating in the clouds on a sunny afternoon,her long beautiful brown hair flowing in the breeze,a true angel.Then I shot Laurel because a mother should never have hear the news her baby has died.Then a couple of days later my sister Shelly because I did not want her to have to live with this shame I have caused all alone.Now my family is pain free and in heaven.I have great remorse for my actions and feel like the dirt that I am.I am taking full responsibility for my actions of these murders.So sorry to anyone I have hurt.Rest in peace my little family Love Daddio xoxo

Emily Janzen’s Twitter account portrayed a young girl with a charming sense of humour and a love of animals. But hidden between her light-hearted tweets were some telling signs of her depression. “Whenever I start to feel sorry for myself, I just thank God I’m still alive. I complain about all the pain, but at least I’m here to feel it,” she tweeted on April 24.

Whenever I start to feel sorry for myself, I just thank God I’m still alive. I complain about all the pain, but at least I’m here to feel it

I’m so tired of people making me feel guilty for being too sick to hangout. Do you think I want to sit at home or in the hospital all day?NO

I need this life to be over

I took so many things for granted before I was sick 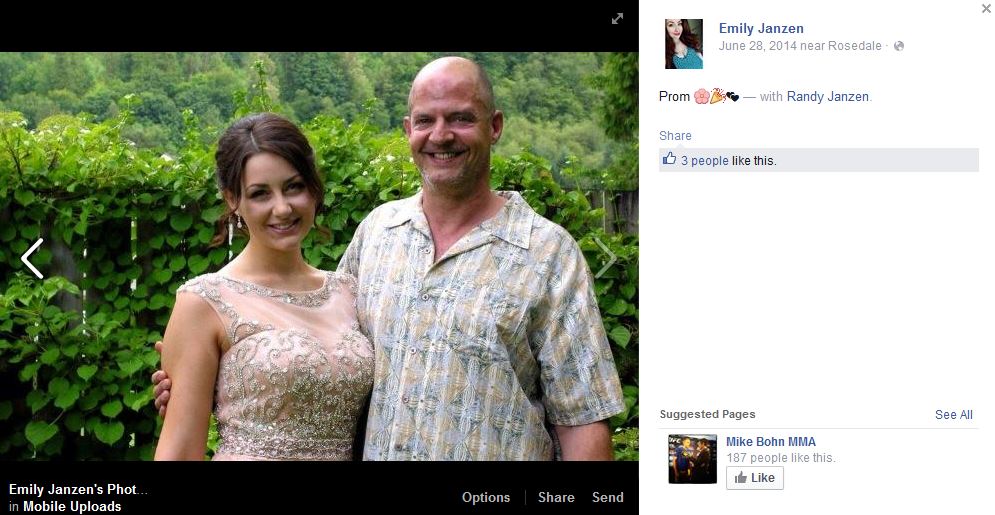 Emily with her father, Randy Janzen in 2014. 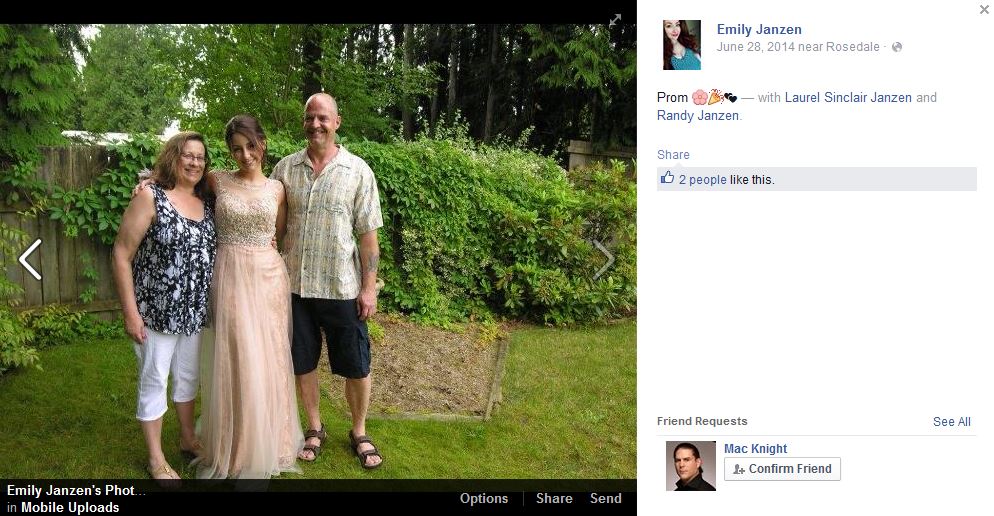 Emily with her mother Laurel and father in 2014.