It’s mid-morning on a fall Friday, and the gardens at the Earthwise Society at the southern tip of Tsawwassen still have a bit of fog draping overhead. The birds are busily creating a steady wall of sound which is only disrupted by the crunch of feet on leaves.

The farm is still bursting with all shades of green and the array of hues from the many flowers still in bloom; it’s a definite contrast to the cobblestone, traffic, and bustle at the heart of Gastown in Vancouver, specifically at Chill Winston, the popular restaurant perhaps best-known for their expansive patio.

Four years ago, Chef Derek Bothwell paired up with Earthwise to create a vital farm to fork relationship; every week Bothwell heads to South Delta to see what’s being harvested, and he creates dishes for Chill Winston accordingly. Bothwell also spends time talking to the many students who come to Earthwise through various school programs.

That partnership has recently deepened, and more of Earthwise’s fresh produce is available through Chill Winston, in the form of weekly Community Supported Agriculture (CSA) boxes. The restaurant is now a city-based hub for the CSA box distribution, so subscribers in Vancouver can easily have access to the farm’s beautiful veggies and fruits. 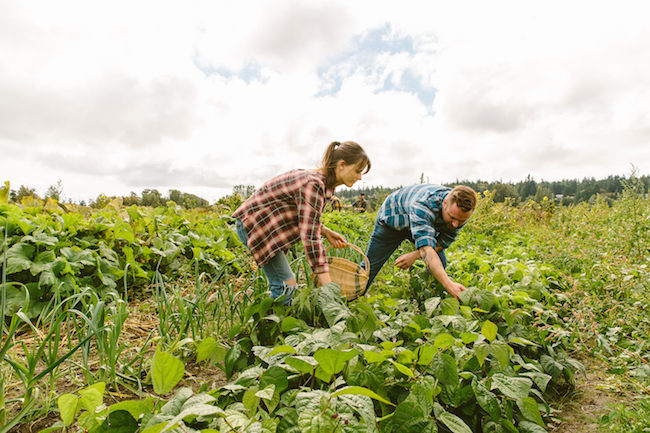 I meet up with Bothwell, and Earthwise’s Executive Director Patricia Fleming and Grower/Educator Charlotte Konken for a tour of the farm and to talk about the vital connection between what’s in the dirt and what’s for dinner.

Inside one of the two hoop houses late-season tomatoes still flourish on ground-to-roof strung plants; the green aroma of the vines is near-intoxicating. Volunteers who are die-hard tomatomaniacs tend to these beauties, carefully selecting the varieties each year and ensuring the soil is at its optimum for growing.

Hawaiian Pineapple, Mortgage Lifter, Clint Eastwood. The tomato names are fun to say, and the lush fruits even more fun to taste. We pluck sweet Sungolds and talk about that powerful moment when someone tries a farm-fresh heirloom tomato for the first time, or better yet, when someone does a side-by-side comparison with a pale, watery standard-issue grocery store tomato. It’s pretty mind-blowing.

The density of nutrients, the sweetness, the vibrant flavours bursting beneath dappled skins, are all a part of the beauty of working with this calibre of produce. It’s fuel for a chef like Bothwell, who says he came to a place in his life when he needed to change his diet in order to improve his health.

“I probably wouldn’t be so pro-veggie if I hadn’t had the experience of eating these kinds of vegetables, because they taste great,” Bothwell explains. “We’re so used to the watered-down, mass-produced tomatoes. When you cut a tomato, and it smells like a tomato, that shouldn’t be a shock. That should be the norm.”

Bothwell says growing and cooking with local, whole food is really personal for him. He connects with the young people visiting Eartwise, and sees it as a great opportunity to inspire change. “I try to talk about food security, talk about making better choices,” Bothwell explains. He encourages everyone to put their hands in the dirt, and often brings kitchen staff with him to the farm so they can have the same experience.

“Being at the farm a blessing,” adds Bothwell. “I just feel so privileged every week to come out here. It’s invigorating and freeing for me.” 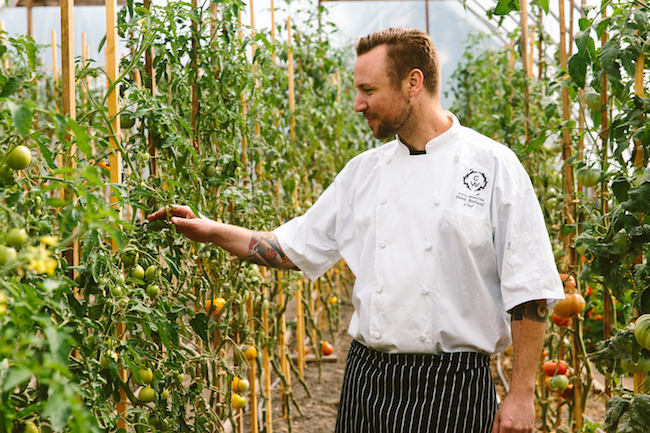 A place like Earthwise is a tremendous place for education. Konken describes the broad range of programs they facilitate, including therapeutic gardening for local mental health patients and caregivers, beekeeping options for potential apiarists, preschoolers getting messy to high schoolers getting course credit.

“We run our farm program as a social enterprise,” notes Fleming, who explains that they also provide support and a positive working model for young farmers. With so many people interested into going into farming, Fleming is pleased that Earthwise is a living, breathing example of what a small-scale operation can do. Beyond that, having a working relationship with a restaurant like Chill Winston provides the farm with yet another kind of bond.

“It’s good for me in the restaurant–I get the best produce in the Lower Mainland,” adds Bothwell.

A couple of hours later, and Bothwell emerges from the Chill Winston kitchen in his chef whites, bearing gifts–well, lunch. It’s transition time in the seasons, and the menu is shifting soon; Bothwell laments the last of the spaghetti squash, but is excited for the advent of beets and other root veggies.

“Farm to table” has become a restaurant buzzword over the past few years–so much so that it may have even worn out its own welcome. Chefs, kitchen staff, and food lovers, however, especially in food-focused Vancouver, have long come to see “farm to table” as not so much a “thing” but rather the only way to run a restaurant and the ideal way to eat. 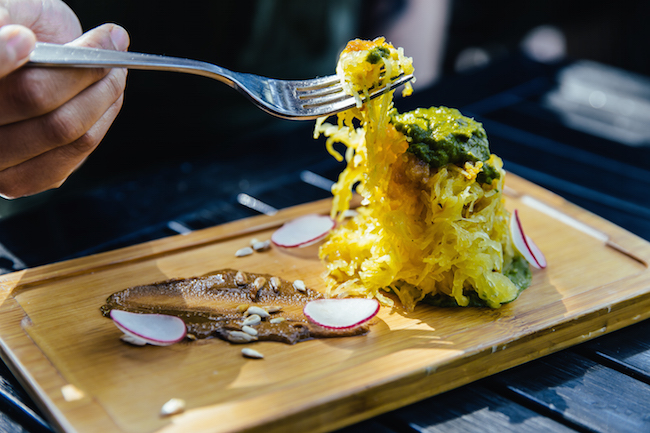 Bothwell sees Chill Winston’s partnership with Earthwise as a delicious prospect. “Having the farm grow for me is not what it’s about. It’s that i have to use what they are growing. You can imagine the culinary challenge that’s kind of opened up to me,” he elaborates. “I have to ask myself ‘how do I use squash four ways?'”

The solution is to get inventive, which is how Bothwell came up with Chill Winston’s roasted spaghetti squash with a fresh basil pesto and sunflower seed butter. Piled like a haystack, and twirled like pasta, it’s a golden bite that showcases the best of the season.

Bothwell readily admits that Chill Winston’s menu is increasingly veggie-centric, but he does realize there’s a fine line between practicing what you preach, and being outright preachy. Rather than hit diners over the head with the “farm fresh” concept, the menu takes small opportunities to give nods to the farm.

In fact, the menu’s first listed item is the Earthwise Platter, a stunning, colourful celebration of what’s fresh and in season. In the coming weeks, those raw slices of lemon cucumbers will give way to cooked comforts, but still be right from the ground at Earthwise. (The platter, it’s worth noting, is precisely what you want to order when enjoying drinks or dinner with friends, and a welcome respite from the usual mounds of greasy finger foods you might veer towards.)

Simple preparations are often the best approach with seasonal veg. “The best thing is to step back and do less, give Earthwise the credit, and let the product shine,” remarks Bothwell.

Bothwell may be inclined to let his dishes speak for themselves, but he also takes advantage of the chance to talk to customers about where their food comes from, particularly when they come in to pick up CSA boxes, which creates a natural environment for the subject, as well as the more expansive topic of supporting local farmers, food artisans, and vendors. In Vancouver, with so many residents having to make sacrifices because of the high cost of living, Bothwell admits money often factors into our food choices.

Still, he’d rather see someone put down an extra buck or two just to get a taste of a real, farm-fresh tomato. It’s pretty revolutionary.

Diners can head to Chill Winston in Gastown to enjoy Bothwell’s inventive fare using Earthwise produce. There are plenty of options for visiting and supporting the Earthwise Society, including the upcoming annual 100 Mile Banquet on October 17, a feast by Bothwell and the Chill Winston team served on the Earthwise grounds. Details and ticket info are available online.